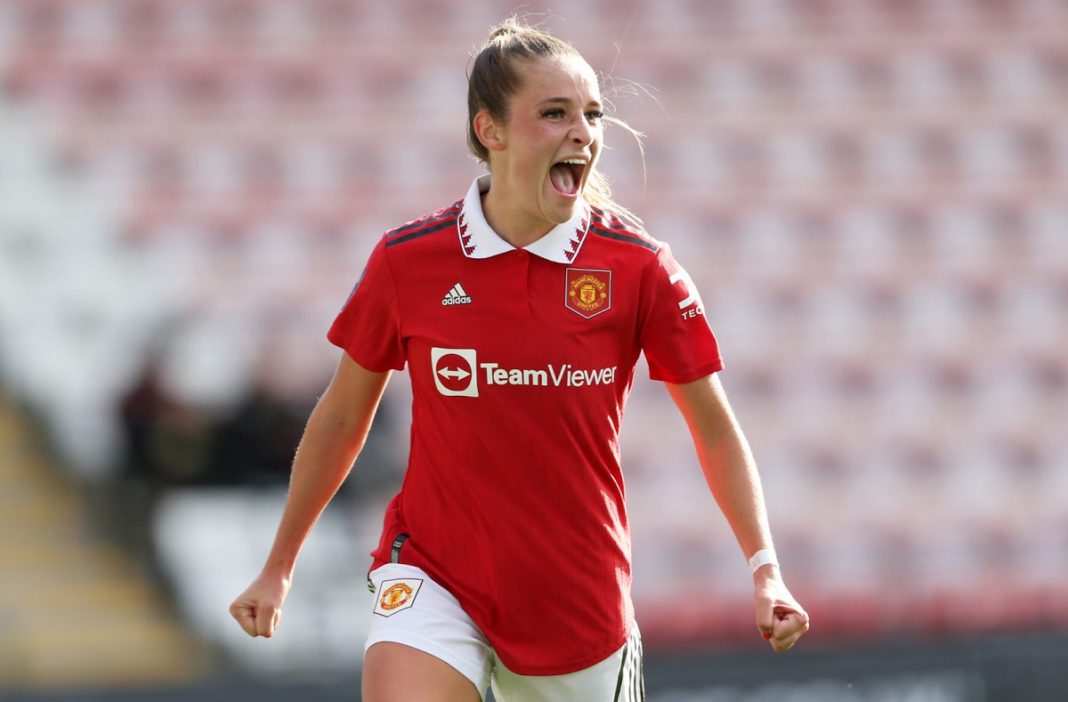 Ella Toone who is now a Manchester United star was initially a huge fan of the team even citing Christiano Ronaldo as her biggest influence. With her hard work and dedication to football, she was set to live the Old Trafford dream she didn’t even bother to have! Here’s how her career trajectory took off, in addition to some facts about Ella Toone’s boyfriend.

Ella Toone: 6 Facts About Her Childhood Dreams, Boyfriend, And More!

Ella Ann Toone came into this world on September 2, 1999. She plays as a forward for Manchester United and the England national team.

The academy of Manchester United allowed youngsters a spot-kick at half-time in a men’s Premier League game, making this Ella’s first experience on the pitch came as a child.

“I think it was Man United against Bolton because my godfather was taking pictures of me in the stands and he was a huge Bolton fan,” she recalled. “I just remember going out at half time, playing little games on a small scale and then coming off the pitch afterwards and having some grass on my boot. It didn’t last very long, it’s dead!

Growing up, Toone supported Manchester United, a club whose men’s team had dominated English football and been crowned kings of Europe but whose women’s team…well, there wasn’t. For one of the star players in the club’s girls’ academy, the course was a dead end.

“Unfortunately, it was always in the back of my mind growing up that I had to leave,” Toone once stated during an interview.

She left, moving first to the Blackburn Rovers academy and then after making a senior breakthrough, joining Manchester City in a move that, in most other circumstances, might be seen as unforgivable. Coincidentally, it was City that hosted the first game of the last Women’s Euros held in England in 2005, when a crowd of just over 29,000 was by far the biggest at the tournament.

Ella Toone is dating non-league footballer Joe Bunney, as photos of them having fun at Ibiza popped up. The 23-year-old striker, whose stunning goal helped England beat Germany in the Euro final, celebrated in Ibiza with the 30-year-old defender.

The pair were pictured kissing on the beach and one of their friends said: “Ella and Joe are very much in love and have been together for a while now. They are both from Manchester and have mutual friends who introduced them. “Those who know them think they are the perfect couple.

Joe is Ella’s biggest cheerleader and he couldn’t have been prouder to see her lift the trophy at the Euros. Ella was pictured letting her hair down on a luxury yacht off party island and then she also took off to be at a Calvin Harris concert alongside other members of the England women’s team, including captain Nikita Parris and Leah Williamson.

Joe couldn’t resist his new beau in Ibiza to celebrate with Ella”, one friend stated about the former who is currently a free agent after leaving Warrington Rylands at the end of last season.

England hero Ella Toone plays for Man United Women. On the other hand, Joe has already played for a number of teams, including a five-year stint at Rochdale and spells at Northampton Town and Bolton Wanderers. Joe, who has two children from a previous relationship, also had a trial at Scunthorpe in the summer and featured in a pre-season loss to Middlesbrough.

The young striker, from the formation of Manchester United (2007-2013), did not continue the Mancunian adventure due to a lack of development of the first team. Transferred to Blackburn Rovers for a season, she then joined Manchester City in 2016. She was nominated in 2018 for the FA WSL best young player of the year award, which ultimately went to Beth Mead.

The same year, she returned to her training club, Manchester United. With her, six other players from the Mancunian team returned to the team that year.

Toone was voted the FA Women’s Championship Player of the Month for February 2019, notably thanks to a four-fold victory against Leicester City on February 13. In 2019, against the same opponent, she scored five goals. With this performance, she equaled Jessica Sigsworth’s record for goals in a League Cup match. Toone became the club’s top scorer of the 2020-2021 season with ten goals.

Ella saw her first national team cap at the September 2020 rally and made her debut on February 23, 2021 at half-time in a game against Northern Ireland. In May 2021, she was one of four reservists for the Tokyo Olympics. Thanks to rule changes due to the COVID-19 pandemic, the English group can accommodate 22 players instead of 18: Toone joins the Lionesses in Tokyo.

In June 2022, Ella made history in the England squad for UEFA Women’s Euro 2022 where she helped England win their first major tournament since the 1966 World Cup. She equalized against Spain in the quarter-finals – and her incredible chip in the final after coming off the bench drove the Wembley crowd wild.

Ella said: “I thought that would be the best move to make. “I started celebrating before the ball even entered the net so I was confident that it was going to come in and then the whole stadium erupted. “Honestly – the best feeling of my life”.

In November 2021, Manchester United were delighted to announce the extension of Ella Toone’s contract until June 2025.

The England international had signed a contract until June 2025 with the club.

Toone joined the club in 2018 and she holds the record for appearances and the record for goals for the Manchester United women’s team, with 36 goals in 83 games played.

Called up for the first time in September 2020, the 23-year-old made her national debut this year during England’s big win against Northern Ireland (6-0), in which she scored a goal from the penalty spot.

“Signing a new contract at this club is really great for me. United has been a part of my life throughout my childhood and I’m thrilled to continue my journey here,” reacted Ella, after the official announcement of his contract renewal.

“The club has the same ambitions I have as a player. I’ve already learned so much here and I just want to keep working hard, doing my part and achieving success..I would also like to thank everyone who has been involved in my journey so far, from my family to my friends, including my teammates, all the staff and the fans, whose support is always deserved….I want to make you all proud and create memories to keep with this club”, she concluded.

Really versatile as a player, Ella Toone has the ability to find pockets of space that she handles the ball in. She really shines in small spaces, that’s her strength in attack.

And then there is so much potential still in Ella being only 23 years old as of 2022 and she’s still learning so we know that if she keeps working hard, she’ll have a bright future ahead of her. Ella Toone prefers to play with her right foot. Her jersey number is 7.