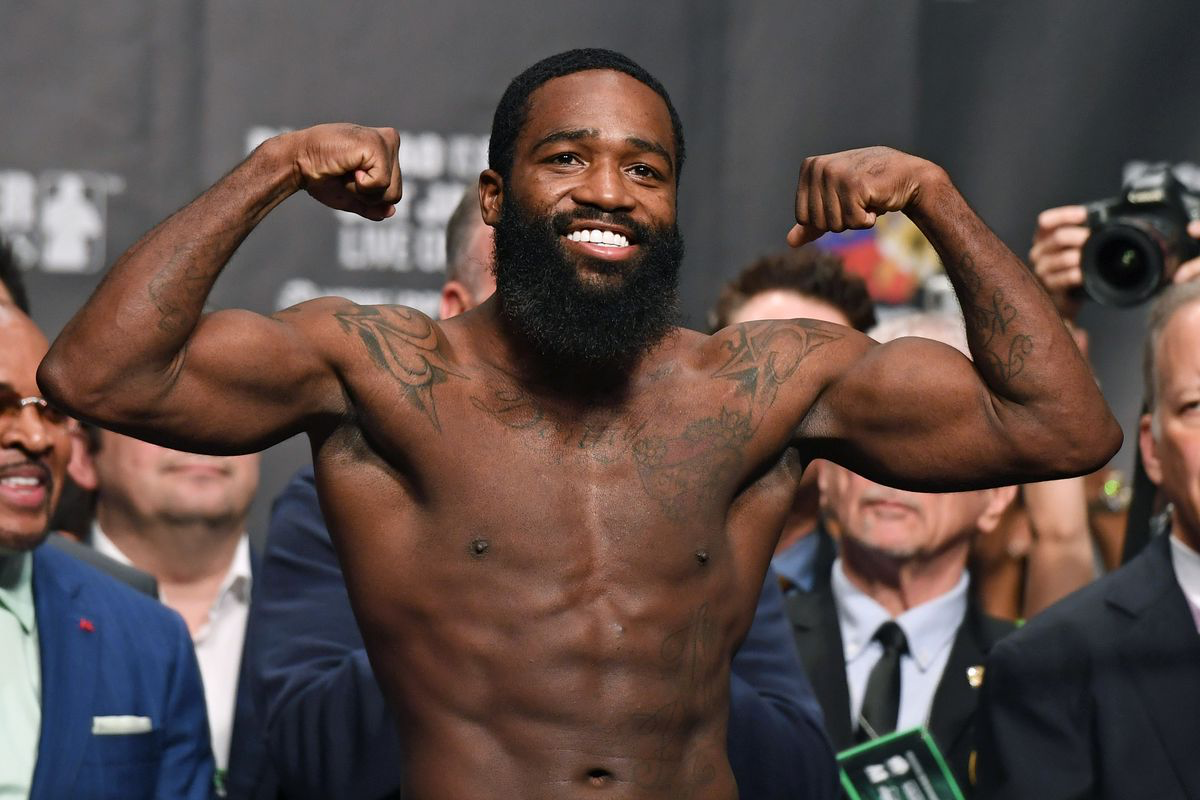 In 2021, it was interesting to see pro-wrestler Adrien Broner unleashing his new self after a long in-ring gap. After an extensive gap of almost 25 months, Adrien Broner defeated undefeated Puerto Rican Jovanie Santiago, on February 20, 2021, on Showtime via a unanimous decision. The American wrestler previously battled against the Filippino Senator, Manny Pacquiao, for the WBA welterweight title. In that bout, this professional wrestler suffered a lopsided unanimous decision loss and bowed out. However, his comeback was successful and helped him rise to the top of the boxing world once more. Till today, Broner is the most talked-about pro wrestler who breaks into the news headlines. The former four-division champ keeps himself relevant and is famous for his activities both inside and outside the ring. Let’s take a look at some interesting facts about this pro-wrestler!

Who is Adrien Broner?

American professional boxer Adrien Broner is known for his many achievements at a young age. Nicknamed The Problem, this wrestler has quite an impressive professional record. Out of the 38 professional fights he has fought, he has won 33 of them, lost just 3, while the other two were no-contest and a draw. In his career, so far Adrien Broner has held the world championship in four weight classes.

In 2013, he scored the WBC Welterweight Title

From 2015 to 2016 secured himself the WBA Light Welterweight title.

Broner’s fighting style is an awesome skillset that makes him a tough fighter for his opponents. His quick right uppercut, hard-left body shot have often sent his rivals to the canvas. The American pro-wrestler is extremely aggressive in the ring and is known for throwing many punches at his opponents.

The American Ohio-born wrestler debuted in 2008 and signified his run by overpowering every opponent. Adrien Broner victoriously battled a major chunk of opponents and became a fan-favorite soon. However, in 2013, in his twenty-eighth fight, the resilient Marcos Maidana obliterated his winning streak.

In a close battle, the American pro wrestler lost the bout with a unanimous decision on judges’ scorecards after Marcos Maidana.

Adrien Broner is from Cincinnati, Ohio

Adrien, born on July 28, 1989, started boxing at the age of six.  His passion for the sport only manifested and grew over the years. Adrien Broner’s mother was extremely supportive and happy at the thought that he had channelized the aggressive streak in the right direction.

Interestingly, when kids of his age were involved in criminal activities, common in those days then, Adrien Broner concentrated on boxing. Today, Adrien Broner credits boxing for keeping him away from criminal practices.

“I got real respect for my woman,” the Ohio native said during an interview with VladTV (seen below). “And, that’s why I didn’t do that ‘Love & Hip Hop shit.’ You’re not about to break down my character, or degrade me, or degrade her for a f–king TV show, for an episode,” Adrien continued.

Adrien has 7 kids with 6 baby mamas

He proposed to Arie Nicole, his girlfriend of many years, in 2015. They have children together. Adrien noted that his fiancee has “played a big part” in his career during an interview.

Many wrestlers share a love for different types of music and Broner is especially biased towards rap! The American wrestler has a mighty interest in rapping and music that has led him to make countless songs and solo albums. Moreover, this Ohio wrestler appeared in various other tracks featuring unique artists. The following are his entrance theme songs:

Back when he was 23-years-old, Broner, who was in Miami at the Fontainebleau Hotel, entered a brawl with a random stranger. Seeing this, two security guards ran towards them to separate the fight. Getting hit by an actual wrestler isn’t someone most people look forward to but if you’re a security guard, it’s your job. The former four-division champ wasn’t able to stay calm and in the breakup of the fight, he bit one of the security guards on the forearm and was charged with a $1,500 bond.

The former four-division champ is one of the most controversial boxers at present for having had a history of arrests. In fact, this wrestler was forced to miss the 2008 Olympics because of a 14-month jail sentence for some alleged charges. Adrien Broner was also arrested in 2017 and 2018 on a few other charges such as alleged battery and armed robbery charges.

One of his earlier arrests was in 2016 when he was charged with a misdemeanor battery for an alleged altercation with a female waitress at a nightclub in Las Vegas. That October 2016 incident occurred soon after he shared a series of cryptic messages on Instagram teasing he was contemplating suicide.

Then, on April 20, 2017, the wrestler was arrested on a warrant stemming from a previous arrest in 2014, after he failed to appear in court.

On February 13, 2018, Adrien was arrested with a misdemeanor sexual battery charge in Atlanta. He was later released on bail.

The professional wrestler battled Malignaggi in 2013. Prior to the fight, Adrien Broner took a dig at the American-Italian boxer for his past relationship.

The Ohio native not only gave him a taste of his prowess in the ring but also fired verbal shots at him and won the fight with a split decision.

Adrien, who gained the nickname, “The Problem”, is known for his outspoken behavior, both within and beyond the ring. The incident below is befitting of an individual nicknamed: “The Problem”.

On September 10, 2017, TMZ reported a brawl in Las Vegas that was caught on video of this wrestler knocking out an agitating fan.

TMZ Sports obtained and uploaded an edit of the video, which started with Broner taking pictures with fans. A moment later a strange man began to heckle Broner.

The wrestler became aggressive as his female companion tried to restrain him but instead he shoved her away then ferociously delivered a blow that reeled the agitator backwards, knocking him out like a wrestler is trained to do.

Following this incident, Broner was issued a summons on October 26 but was returned on November 8 and was “not deliverable as addressed; unable to forward.”

The records did not give a reason as to why the summons was not able to be delivered to the wrestler who was then subsequently asked to appear in court for an arraignment but the Las Vegas Justice Court stated Broner failed to appear.

A warrant was then issued for his arrest. According to TMZ, it reached out to Broner who told them he “didn’t know about the hearing — and if he did, he would have appeared.”

On May 31, 2008, Adrien Broner made his breakthrough as a professional boxer. It was indeed a dream start for the young Broner who scored three consecutive first-round knockouts against Allante Davis, David Warren Huffman, and Ramon Flores, respectively.

He won the fight in the sixth round in his fourth match, against Terrance Jett, and ended the year with a no-contest decision against Eric Ricker.

The pro-wrestler’s career gained greater heights in the next couple of years as Broner won important matches against tough opponents. Some of the boxers the Ohio native played against were Jose Alfredo Lugo, Eric Ricker, and Angel Rodriguez.

Broner had played against Rafael Lora, Carlos Claudio, Guillermo Sanchez, and Ilido Julio, by the end of 2010 and was victorious against all. All through the year 2010, he played Tommy Atencio for nearly 13 times, battling and stopping the latter in the first round itself for six times.

The American wrestler’s career meteorically surged upwards after his fight against former Super Bantamweight champion Daniel Ponce de León on March 5, 2011. It was a close match between the two tough players. The two men proved stronger than the other thought by the end of it the match was ruled in Broner’s favor and the unanimous decision became highly controversial.

After his contentious success against Ponce de León, Broner’s next battle was a highly publicized one, against Top 10 Super Featherweight contender Jason Litzau on HBO’s ‘Boxing After Dark’ show. In the first round itself, Broner won the match, after thumping some hard-hit punches on the Minnesotan.

Broner then came into the limelight in November 2011 when he contested against Vicente Martin Rodriguez on HBO as part of a doubleheader. The Ohio native comfortably defeated Rodriguez by knockout in the third round, thereby winning the vacant WBO Super Featherweight World title.

The WBO title made this American wrestler an overnight sensation and he later successfully defended his title against Eloy Perez, Top 10 Super Featherweight contender, in a match that was held in February 2012, by a knockout.

After the victory against Perez, Broner’s next battle was slated for July 2012 against Super Featherweight contender Vicente Escobedo. However, since Broner was over the 130-pound limit during the weight-in, the wrestler was stripped of his title. Nevertheless, the match wasn’t called off and Broner won it in the 5th round.

In November 2012, Broner premiered in the Lightweight division, against Antonio DeMarco, WBC Lightweight champion. Nicknamed as Ring No 1 in the Lightweight division, DeMarco was a world-class player and an extremely tough opponent. However, Ohio’s Broner had strong uppercuts to deliver coupled with quick combination movements which left DeMarco startled. By the eighth, Broner seamlessly not just won the match, but also secured his second world title.

He successfully defended his title in a match against the former WBA Champion Gavin Rees in February 2013. Rees could not keep up with Broner’s speed and his hooks and uppercuts and by round 3, Rees was slowly slumping.

Though Malignaggi started the battle aggressively, by the middle of the match, Broner found his ground and bowled over the former champion with his power punches to win the title comfortably.

In October 2013, Broner came face to face with his first loss as a professional boxer while defending his welterweight title. Despite being a favourite, Marcos Maidana was too strong a contender for Broner right from the first round itself. Though Broner fought to up his game, he couldn’t match Maidana’s punches and faced his first-ever defeat.

In 2014, Broner made his debut in the professional light welterweight division against Carlos Molina. Scheduled for 10 rounds, Broner was victorious by a unanimous verdict. Broner’s next match was against Emmanuel Taylor for the WBA International title. The match went on until the 12th round after which Broner was declared victorious.

Broner made a comeback to welterweight in 2015. His comeback match was against former IBF Welterweight champion Shawn Porter. Porter dominated the entire wrestling match and eventually won it by a unanimous decision.

In October 2015, Adrien Broner announced his comeback to light-welterweight and reduced his weight to 140 pounds. He wanted to get the fourth world title, with a match against former WBA champion Khabib Allakhverdiev. The Ohio native defeated Allakhverdiev by TKO and Adrien Broner won the WBA title in the 12th round.

Broner’s most publicized battle of 2016 was the one against veteran boxer Ashley Theophane. Broner successfully defended his WBA light-welterweight title in the match. Adrien Broner completed the year by returning to welterweight yet again, this time for a match against Adrian Granados on Showtime Championship Boxing. Broner was victorious in a 10-round split decision, which was considered controversial.

He returned to light-welterweight for a match against WBC lightweight champion Mikey Garcia for the title. However, he lost the match by a unanimous decision, thus making it his first loss in the light welterweight category.

In 2017, Broner battled against Jessie Vargas, a former world champion in two weight classes, in a 144-pound catchweight bout. The duo fought it to a 12 round majority draw. While Vargas dominated in the first half of the match, Broner soon pulled up his socks and ruled the second half.