Danny Havoc: From Wreaking Havoc In The CZW To Dying At 34! 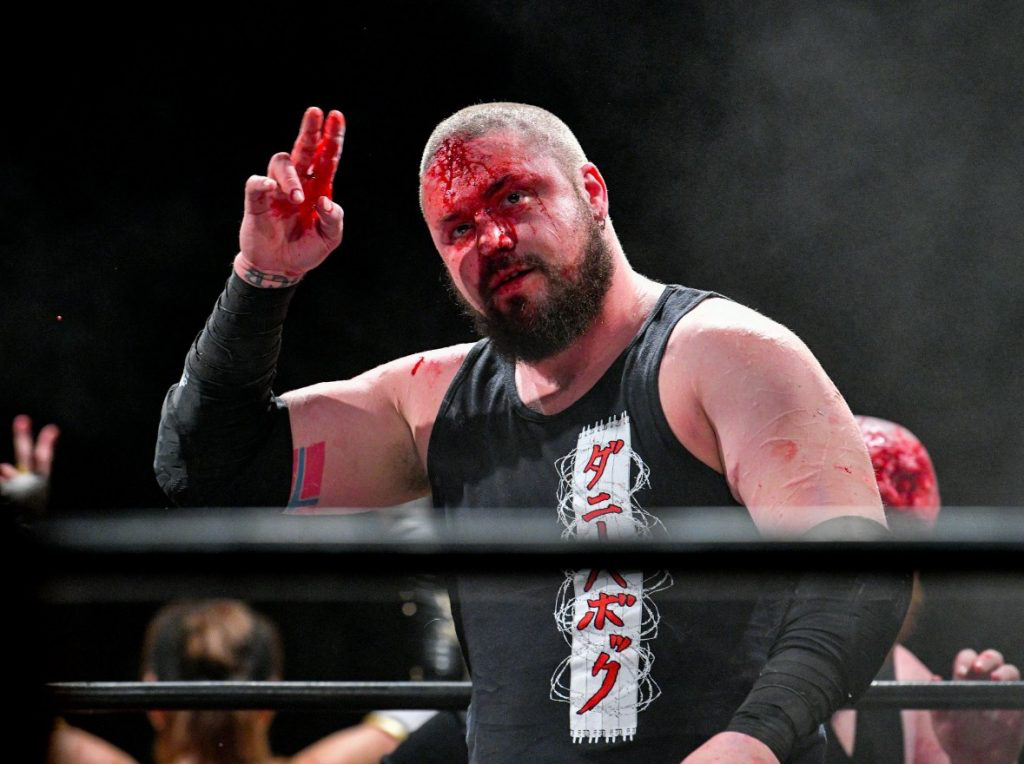 One of the best death match and ultraviolent wrestlers of all time, Danny Havoc left this world with much to offer his fans! He took us on a journey in his storyline for Combat Zone Wrestling(CZW), and was noted for mixing his hardcore wrestling with his flawless technical style. He was also known for wreaking havoc in competitive groups in the CZW and for his feuds with DJ Hyde. Here are some facts about the wrestler who died too soon!

The Life Of Danny Havoc Explained In 8 Facts!

Cause Of Death: Heart Failure

Grant Berkland aka Danny Havoc came into this world on May 19, 1986, in Cylinder, Iowa.

The Iowa native started wrestling in his family’s barn with his friends after coming back from school.

After watching many wrestling tapes and specifically after attending the Combat Zone Wrestling’s Cage of Death 6 event, the Iowa native traveled to Philadelphia to try out for CZW. It paid off, he soon became a CZW alum.

After training for a few months, Havoc made his wrestling premier in the student battle royal at Tournament of Death 4 on July 30, 2005. At one point during the match, the Iowa native was set on fire by fellow wrestler WHACKS.

The CZW alumnus was trained by Mike Quakenbush, DJ Hyde, and Chris Hero

CZW alumnus Danny Havoc passed away at the age of 34 due to heart failure in May 2020. His death reportedly comes just months after his wife Brianne Morrow died of heart failure as well in April 2020.

Combat Zone Wrestling Twitter also wrote, “This cuts too deep. Grant “Danny Havoc” Berkland. He was an inspiration to so many and a friend to all and our hearts go out to his family and loved ones. We can take a small comfort in knowing the entire wrestling community are sharing the same grief right now.

Impact star Sami Callihan wrote, “Absolutely heartbroken. I wouldn’t be who I am today without Danny Havoc. Absolute genius who never got the credit he deserved. I’m beyond privileged to been able to travel the world with him. Reach out to your loved one. Life is so short. Love you Grant. RIP”

Havoc made his singles debut at the first annual Chri$ Ca$h memorial show on September 10, 2005.

He was victorious against fellow CZW Academy graduate Andy Sumner with a Death Valley driver off the ring apron through a barbed-wire board propped up on two chairs outside the ring. The Iowa native also started a long feud with DJ Hyde that included matches on CZW shows as well as STF (Stars of the Future) and NEXT shows.

Havoc finally defeated DJ Hyde after starting their feud at CZW’s April 2006 show Any Questions? and, post-match, Hyde flung Danny Havoc off of a balcony through a table!

On December 1, Havoc made his way to the finals of IWA Deep South’s “Carnage Cup” tournament before falling to Freakshow.

A week after his IWA Deep tournament, on December 8, at CZW’s flagship show, Cage of Death, Havoc was the last team member of Team CZW to remain standing on the top of the cage at the end of the big Cage of Death match.

The Iowa native won the seventh annual Tournament of Death on May 17, 2008. In the first round, Havoc was victorious after beating Ram in a light tube bundles game. In the semi-finals, the American pro-wrestler and fellow wrestler Nick Gage advanced by beating Pinkie Sanchez and Greg Excellent in a “fans bring the weapons” match. In the finals, Danny Havoc was pitted against Drake Younger, Scotty Vortekz, and Nick Gage in a no rope barbed wire 200 light tubes match to a single pinfall.

During the battle, Havoc was chokeslammed on two chairs by Necro Butcher. The Iowa native was also dropped out of the ring by Nick Gage, but his arm caught the barbed wire and was badly cut from his triceps to his armpit – ouch!

The same year, he also won the IWA Deep South Carnage Cup, advancing over the Juggulator, WHACKS, and waa victorious over Nick Gage, Freakshow, and Corey Shaddix in the finals.

The CZW wrestler was awarded the Ultraviolent Underground Championship at Decision ’08, after then-Champion Drake Younger, who also held the World Heavyweight Championship gave him the title, following a four-way match.

In 2010, Danny Havoc wrestled at the CZW Tournament of Death 9

The American wrestler made it to the finals of wXw’s Gorefest II tournament in Germany, losing to Thumbtack Jack in a lighttubes and barbed-wire pits match. The Iowa native had defeated Thumbtack Jack the month before in the United States to retain his Ultraviolent Underground Title, which was covered on G4 Underground.

During the year 2009, Danny Havoc was entangled in a bitter feud with Switchblade Conspiracy founder Sami Callihan. This concluded in the 11th annual Cage of Death match, with Callihan winning and attempting to slash Havoc with a knife, only to be cut off by the returning Necro Butcher.

The following year, a feud entangled between Billy Gram’s CULT FICTION faction (originally composed of MASADA, tHURTeen, Brain Damage, and JC Bailey) and Havoc’s babyface faction, which came to be known as The Suicide Kings (originally Havoc, Eddie Kingston, Drake Younger, and Scotty Vortekz).  In the midst of that same year, at CZW Best of the Best X, Danny Havoc was victorious against Jun Kasai to win the Ultraviolent Underground Championship for the second time.

Danny Havoc would then drop the UVU belt to MASADA four months later, and the title has since been retired.

From the remains of the Suicide Kings faction, Havoc declared that a new group was to be recognized, which he proclaimed to be “The Nation of Intoxication.” This group had initially comprised of Havoc, Moore, and Vortekz, who quickly invited Lucky 13 (formerly CULT FICTION’s “tHURTeen”) to join them. Vortekz said his goodbyes to the group and the company shortly thereafter, but the Nation continued to prosper, eventually winning the World Tag Team Championship on two occasions, trading them back and forth with heel group, 4LOKO. The Nation became known almost as much for their boozed-up shenanigans and comical antics as for their trademark daredevil style, punctuated by the core members’ ability to combine exciting high-flying maneuvers with the hard-hitting, risk-taking ultraviolent style that CZW has made its name with.

At the same time, Havoc became a semi-regular mainstay in Big Japan Pro Wrestling, as one of the most consistent representatives of CZW to compete in the legendary deathmatch promotion. On a 2012 tour, Havoc and his frequent travel partner, Drake Younger, represented CZW as participants in BJW’s Round Robin Deathmatch Survivor League, the winner of which was to earn a shot at the BJW Deathmatch title. While both men had respectable showings, neither of these two wrestlers managed to advance far enough to be in title contention. Toward the end of the tour, Havoc and Younger — who also were longtime friends — had a very public falling out at the BJW Dojo, in which they went face to face to battle and had to be pulled apart by BJW Dojo members. This sparked a feud between the two that saw the return of long-missing CZW favorite, Scotty Vortekz, who had at different times been tag partners with both men. Vortekz made his allegiances known by siding with Younger to be victorious against Havoc and fellow Nation of Intoxication member, Lucky 13.

In 2013, Havoc came out the victor in CZW’s annual Tournament of Death, advancing over the likes of Rory Mondo and Big Japan Wrestling’s young deathmatch prospect, Takumi Tsukamoto, then finally defeating his former friend and partner, Scotty Vortekz, in a 444 Lighttubes Death Match, in which eight-foot fluorescent bulbs were attached to the ropes on all four sides and scattered across the floor of the ring. Despite taking a great deal of punishment in the match, Havoc managed to reverse a top rope maneuver into his patented finisher, the General Order 24, onto a massive pile of bulbs for the pin. This makes Havoc one of only three two-time Tournament of Death champions in its fourteen-year history.

Havoc lost to Rickey Shane Page in an Ultraviolent Hardcore Match at Cage of Death 18. Page pinned Havoc after giving him a top rope powerbomb through a plate of glass. During that event, the Nation of Intoxication dissolved and Havoc went his own way, getting into a feud with Alex Colon. During the Tournament of Death 16, Havoc publically announced his retirement and that he would face off against Alex Colon at Down With The Sickness. At Once In A Lifetime, the American wrestler took part in a match against Atsushi Onita and his men from FMW.

The Iowa native lost his match against Alex Colon to a standing ovation as DJ Hyde and the locker room cheered for Danny. It was then confirmed by CZW officials that Danny Havoc, who was just in his 30s, had officially retired from professional wrestling.

Towards the end of his career, at a benefit show for Matt Tremont’s H2O Wrestling the previous year, Havoc was named as part of a Tokyo tour promoted by Game Changer Wrestling (GCW).

Having come out of retirement at the event, he was involved in tag team deathmatches. The following are his last matches because he would die by the end of March.

On February 3, at Live Fast Die Young, Havoc paired up with Tremont and Isami Kodaka against Drew Parker, Jimmy Lloyd and Toshiyuki Sakuda, where Parker missed a 450 splash but the Iowa native hit him with a death valley driver for the win.

On February 4, at the now ironically named Ready to Die, Danny Havoc teamed with Alex Colon against Kodaka and Sakuda, in which Danny Havoc performed an around the world slam, followed by a death valley driver (called a General Order 24) on Kodaka for the win.

On February 5, at Art of War, Havoc teamed with Colon and Tremont against Kodaka, Kenji Fukimoto and Takashi Sasaki. Towards the end of his career, Havoc took the pin after Team Japan performed the super double knees off a ladder onto a bundle of light tubes of which Havoc was underneath.

On February 15, at Run Rickey Run, Havoc went face to face to battle SHLAK in a death match, replacing the injured Masashi Takeda. Towards the end of his career, Havoc went for a death valley driver but just missed the moonsault follow-up. This allowed SHLAK to hit him with two piledrivers on lighttubes and gusset boards for the win, which was his last match.