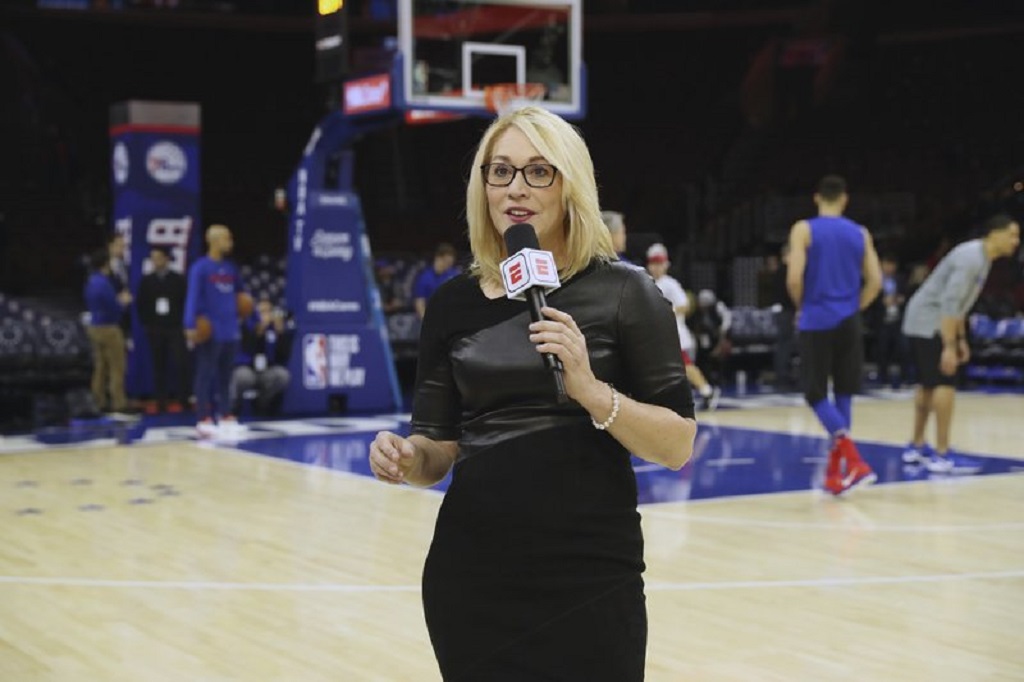 ESPN basketball announcer for more than 25 years, Doris Burke, is one of the most popular sportscasters in America. When she was named a full-time NBA color commentator before the start of last season, she became the first woman ever to take on a regular national NBA game-analyst role.  Burke is the rare broadcaster who’s earned respect and admiration from players, coaches and fans alike. She stands out for dropping insightful factoids and her style has earned Burke a cult following. A colleague, former NBA coach Jeff Van Gundy, once dubbed her the “LeBron James of sportscasters,” and Kevin Durant called her “the greatest.” In 2016, the rapper Drake donned a T-shirt with her likeness while sitting courtside at a Toronto Raptors game. Woman Crush Everyday, read the words–a play on the popular Instagram trend Woman Crush Wednesday.

Awards and Records For Assists On Her College Basketball Team:

The youngest of eight kids, Burke grew up playing hoops in Manasquan, a New Jersey shore town. After watching college games on NBC on weekends, she’d sometimes run out of her house with a ball and high-five the hedges, as if she were entering an arena for layup lines.

She discovered her love for basketball in the second grade. “The love of the game is something I found [early on]”, Burke told NJ Advance Media, “I literally picked that ball up as a 7-year-old and I have not put it down to this day.” This passion allowed Burke to play competitively throughout high school and college.

She landed a spot on the Manasquan High School girls varsity team as a freshman, and eventually became the all-time leading scorer in the school’s history. “She was the kind of kid, if she saw the boys do something, she wanted to know how to do that,” said her high school coach Bill Rogers, “I don’t know how many girls — if at all — had a jump shot. The boys did. So Doris would watch the boys and she would come to me and say, ‘I want to learn a jump shot. How do I shoot a jump shot?’”

Burke worked under Providence’s head coach Bob Foley between 1987 and 1989, but left the coaching staff after she married Gregg Burke, who was an employee in the athletic department. They had two children, Sarah (born 1993) and Matthew (born 1995), during their marriage, which later ended in divorce.

Burke began her broadcasting career in 1990 as a means of staying close to the sport she loved. She was the regular announcer for the Providence women’s basketball games on the radio, but a random stroke of luck– a male announcer failed to show up for a televised Pittsburgh-Rhode Island game– forced her in front of the camera for the first time. Her ex-husband Gregg recounted the incident to the Hartford Courant:

“We both shower, we bomb down there, 55 minutes before the game, she hasn’t prepared for either team. She visits the Pitt people for 10 minutes, the PC people for 10 minutes and they drag her out to do the opening. And she nailed it. She nailed the game. I’m not just saying that because I’m married to her, either.”

I did it and it went very well”, Burke confirmed, “Though I hadn’t prepared, I knew Providence, I knew Pittsburgh. I would’ve watched the game anyways.” Her career skyrocketed from there. In a span of eight years, Burke reported on Big East men’s games, announced New York Liberty games, and began her long standing relationship with ESPN by covering women’s basketball and the NCAA Tournament. In 1999, the Atlantic 10, a collegiate conference, signed her as the primary analyst on its men’s basketball package.

“She was, flat out, the best analyst,” said Bob Steitz, Atlantic’s associate commissioner, “Initially there were some raised eyebrows. I don’t think a lot of coaches had seen or heard her work. I told them, ‘At the end of the year, let’s talk.’ And they had nothing but glowing things to say about Doris.”

Burke was named College Female Athlete of the Year at Providence and became only the fifth person to be inducted into the Providence Hall of Fame. According to GoRhody, Gregg Burke is currently the Deputy Director of Athletics and Head Golf Coach at the University of Rhode Island. According to Celebrity Net Worth, Burke is currently worth $4 million, with a $1 million annual salary. In comparison, reports Daily Choices, sports analysts like Mike Tirico make $3 million per year over at NBC Sports. Other names like Jon Gruden and Chris Fowler (both work at ESPN) also earn substantially more annually.