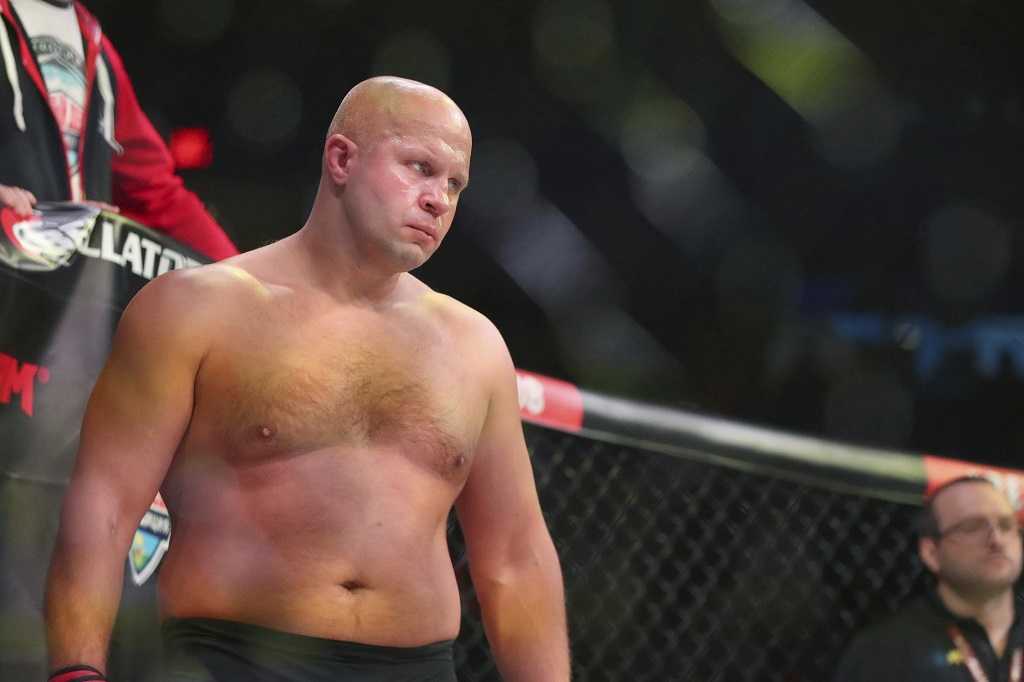 Fedor Emelianenko is well known as the greatest heavyweight mixed martial arts fighter of all time, after being undefeated for nearly a decade. Here are 12 other facts you didn’t know:

Fedor Emelianenko: 12 Facts To Know About “The Last Emperor”

Firefighter in the Russian Army.

5. He was undefeated for a decade:

No other fighter has amassed the amount of MMA accolades over the course of their career like Fedor.

His first loss: an elbow by Tsuyoshi Kohsaka, caused a technical knockout by doctor’s stoppage just 17-seconds into the first round.  Following that loss, in Dec 2000, Fedor went on a 28-fight unbeaten streak (including winning a rematch against Kohsaka by doctor’s stoppage) and captured championships in three different promotions.

His streak concluded on June 26, 2010, when Fedor suffered his first loss in 10 years to Fabrício Werdum, who sunk in a deep armbar for the tap at Strikeforce: Fedor vs. Werdum. He lost twice more consecutively to Antônio “Bigfoot” Silva and Dan Henderson before his four-year retirement.

6. His mother encouraged his career to get them out of poverty:

Fedor Emelianenko’s mother was a teacher and his father was a welder.

His baby brothers, Aleksander and Ivan, are also mixed martial artists and it is said that his mother was the one who encouraged them all to pursue martial arts.

When he was 12-years-old, his first trainer, Vasiley Gavrilov, had to buy Fedor’s judo suit and training shoes he needed for class due to his family being poor. Fedor still trains with another trainer from his early years called Vladimir Voronov, who specializes in Sambo and Judo.

He trained for the Russian national Judo team in preparation for the Olympics in 1997, but decided to focus on MMA or else he’d have to work as hired muscle for the Russian mafia.

7. He is loved by the Russian President Vladimir Putin:

It is unknown what initially spurred the relationship between Fedor and Russian President Vladimir Putin, but it was probably their shared love of judo.

Putin is a life-long practitioner of martial arts, starting with Sambo and eventually earning his 5th-degree black belt in Judo.

Putin has been seen at several of Fedor’s fights, including 2001’s M-1 Global card in Russia where Putin was booed by those in attendance, and has congratulated Fedor ringside after winning. In 2012, Putin handpicked Fedor to replace Russian Prime Minister Dmitry Medvedev on Russia’s Presidential Council on Physical Culture and Sports. He also campaigned for Putin during his presidential reelection campaign that same year.

8. He was also loved by President Donald Trump:

In 2008, Affliction Clothing held MMA fights called Affliction Entertainment, with Fedor being its prized fighter and its biggest promotion.

US President Donald Trump was the company’s main equity shareholder, and even sported Affliction clothing during the promotion’s two events.

Fedor faced former two-time UFC Heavyweight Champion Tim Sylvia at the promotion’s first event, Affliction: Banned, where he submitted Sylvia in 36 seconds to win the WAMMA Heavyweight Championship. At the time of the fight, Sylvia was the fourth-ranked heavyweight fighter in MMA by Sherdog.  In October 2008, Affliction announced plans for a 15-episode reality TV show, Fighting Fedor, in which 16 unknown competitors would fight for the opportunity to face the legendary MMA champion.  “The show will be spectacular,” Trump said in a release. “It will be taped in St. Petersburg, Russia … I’m going to be there.”

9. UFC president Dana White, called it an “obsession” to get him to fight in the UFC:

Fedor Emelianenko is perhaps the greatest fighter to have never fought in the UFC. The saga of Fedor and the UFC goes back more than a decade, and it is debatable that the sole reason UFC’s parent company Zuffa bought PRIDE was in an effort to lure Fedor into the American promotion.  After the collapse of Affliction Entertainment in 2009, UFC President Dana White tried to sign Fedor to an exclusive contract for a title shot at then-UFC Heavyweight Champion and former WWE wrestler Brock Lesnar.

UFC tried to lure Fedor in with $2 million per fight; however, contract negotiations failed due to UFC not wanting to cross-promote with M-1 Global.

In 2012, during Fedor’s retirement, White tried to lure “The Last Emperor” out of retirement to fight Lesnar, but it never happened.

10. He won tournaments in multiple disciplines, including the Pride Grand Prix and the World Combat Sambo:

During his PRIDE run from 2001 to 2009, where he won 28-straight fights and exerted a kind of nine-year dominance that is unlikely to ever be challenged.

11. Where is Fedor Emelianenko now?

He retired in 2012, only to announce his return four years later in 2015. Fedor Emelianenko currently competes under Rizin Fighting Federation and Bellator MMA.