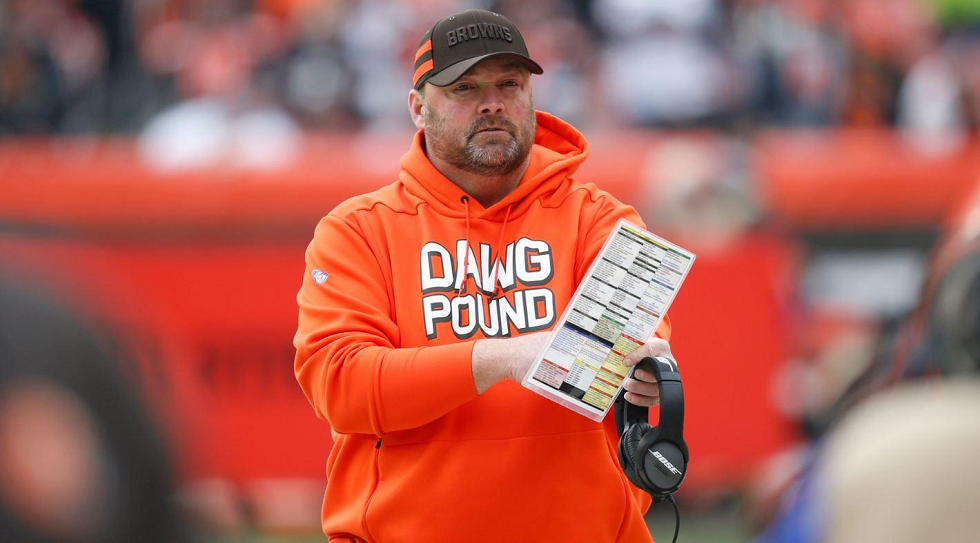 In the midst of another miserable season, the Cleveland Browns fired head coach Hue Jackson and announced offensive coordinator Freddie Kitchens as the next head coach of the Browns in January 2019. When he got the job, Freddie Kitchens was aiming to become the first head coach since Marty Schottenheimer to lead the Cleveland Browns to a winning record. However, he failed at the job too and he was unceremoniously fired as well. His less than ideal relationship with franchise quarterback Baker Mayfield was also speculated to be one of the main reasons behind his firing. Freddie Kitchens was replaced by Kevin Stefanski and he was able to turn things around at the Dawg Pound.

The Browns finished with an 11-5 regular season record and beat the higher seeded Pittsburgh Steelers in the Super Wild Card Round at Heinz Field, Pittsburgh. As of this article’s publication, the Cleveland Browns are all set to lock horns with the top seeded Kansas City Chiefs at Arrowhead Stadium in the AFC Divisional Round. The Kansas City Chiefs feature a high flying offence led by star quarterback Patrick Mahomes who will be throwing the ball to an embarrassment of riches in Tyreek Hill, Travis Kelce and Sammy Watkins. While the Browns are definite underdogs in this matchup, the outcome of this match shouldn’t dictate how they should feel about the 2020-2021 NFL season. They went from missing the playoffs continuously to finally making it and winning a playoff game. And they did all of that after losing their star wide receiver Odell Beckham Jr. to injury. However, this post isn’t about the new found success of the Cleveland Browns, we are here to discuss about their former coach, Freddie Kitchens. Let’s get started.

When was Freddie Kitchens born?

Where is Freddie Kitchens from?

Kitchens was born in Gadsden, Ala. He also attended and played high school football in the northeastern part of the state, for Etowah in nearby Attalia. He was recruited to stay in state as a quarterback.

Where did Freddie Kitchens go to college?

Kitchens played quarterback for the Alabama Crimson Tide from 1993 to 1997 for two coaches, Gene Stallings and Mike DuBose. The program won the national championship with Stallings right before Kitchens got there. He succeeded Jay Barker at QB and was ahead of Andrew Zow.

During his time with the Tide, Kitchens went 22-13 as a starter, posting a total of 4,668 yards passing with 30 touchdowns and 26 interceptions. He led the team to three bowl victories — Gator over North Carolina, Citrus over Ohio State and Outback over Michigan.

What did Freddie Kitchens do before coaching?

Before he landed with Division II Glenville State in West Virginia to oversee running backs and tight ends in 1999, Kitchens worked as a car salesman at Magnolia BMW in Tuscaloosa, right down the road from Alabama’s Bryant-Denny Stadium.

According to the Cleveland Plain Dealer, Kitchens was salesman of the month for two of his three months at the dealership but was unhappy doing it and his true calling was coaching.

Who are Freddie Kitchens’ coaching mentors?

From his 11 seasons coaching various offensive positions with the Cardinals from ’07 through ’17, his main influence was Bruce Arians. Many of his offensive concepts for the Browns and quarterback Baker Mayfield come from Arians’ version of the aggressive downfield passing game.

What was Freddie Kitchens’ health scare with the Cardinals?

Back in June 2013, when Kitchens was only 38, his life was saved after he felt dizziness and chest pain during an organized team activity. With the help of the quarterbacks he was coaching at the time, Carson Palmer and Drew Stanton, Arizona’s training staff quickly recognized that Kitchens needed to be immediately hospitalized for a heart condition.

It was discovered that Kitchens had an aortic dissection, which put on him the brink of a fatal rupture. He was given only a 20 percent chance to survive, but after a lengthy half-day surgery that included replacing a heart valve, Kitchens made a full recovery and was able to resume his coaching career two months later in training camp.

How did Freddie Kitchens get to the Browns?

Arians stepped away from the Cardinals after the ’17 season before resuming his career with the Buccaneers in ’19. When that happened, Kitchens filled the open spot for a running backs coach in Cleveland after Kirby Wilson ended up going to Arizona.

Kitchens brought it again back to Arizona by going with one-season Cardinals coach Steve Wilks as his defensive coordinator. However, Frank Kitchens was also fired after just one season. His coaching was heavily criticised and all NFL analysts wanted him fired.

Despite some criticism for maintaining the added scheming responsibility beyond his gameday sideline leadership and some mixed early results with wide receiver Odell Beckham Jr. in the mix, Kitchens continues to prove he can be a very creative play-caller.

Offensive coordinator Todd Monken did call plays for the Buccaneers under Dirk Koetter last season but he came off shaky work with Jameis Winston. Kitchens was the key to getting an efficient and confident Mayfield as a rookie, and has proved he can commit to getting the best out of running back Nick Chubb, too.

What is Freddie Kitchens doing now?

Freddie Kitchens is the current tight ends coach of the New York Giants. Kitchens spent the previous two seasons with the Cleveland Browns, who he initially joined as running backs coach/associate head coach on Jan. 24, 2018. He was promoted to offensive coordinator for the final eight games of the 2018 season and was the team’s head coach in 2019. Under Kitchens, the Browns beat all three of their AFC North rivals (Baltimore, Cincinnati and Pittsburgh) in the same season for the first time since the division came into existence in 2002.

Joe Judge back in February on the hire of Freddie Kitchens: “I think any position on offense is good for Freddie. He’s got a lot of experience at different positions. He’s been head coach, he’s been a coordinator, he’s been a position coach. He sees it through a lot of different perspectives. What I love about Freddie is he brings an element of toughness and discipline to his room. He brings outside the box thinking a lot of times to how he approaches the game from a game plan perspective. I think he’ll be an asset to working with our offensive coaches and developing the game plan throughout the week. But ultimately, I’ve worked with Freddie, I’ve played for Freddie, and I’ve called against Freddie, and I understand what his players are about.”

When Kitchens was coaching the Cleveland Browns,his offensive skill players were among the most productive in the NFL. With wide receivers Jarvis Landry (83 catches for 1,174 yards and six touchdowns) and Odell Beckham, Jr. (74 receptions for 1,035 yards and three scores), the Browns were one of six teams with two 1,000-yard receivers. In addition to the wide receivers’ production, Nick Chubb finished second in the NFL with 1,494 rushing yards. Cleveland joined Carolina and Dallas as the only teams with two 1,000-yard receivers and a 1,000-yard rusher (Christian McCaffrey was both for the Panthers). Landry, Beckham and Chubb combined for 4,001 yards from scrimmage, the fourth-highest total by a trio of NFL teammates and the most by an AFC threesome in 2019.

How was Freddie Kitchens’ tenure as an offensive coordinator of the Cleveland Browns?

In 2018, Kitchens took over as the Browns’ offensive coordinator following Week 8 and helped the unit to a dramatic turnaround. During the second half of the season, the Browns finished among the league leaders in several categories including yards per game (fourth with 395.1), passing touchdowns (tied for fourth with 19) and total touchdowns (tied for sixth with 25). Cleveland surrendered just five sacks during the second half of the season – by far the lowest of any team in the league – compared to 33 in the first half. The Browns also scored touchdowns on 19 of 24 trips to the red zone en route to posting a 5-3 record in the season’s second half.

How did Freddie Kitchens start his journey in the world of football coaching?

Kitchens has had the opportunity to learn and coach with some of football’s best and most successful coaches. He was a graduate assistant at LSU in 2000 under Nick Saban. Six years later, he broke into the NFL with the Dallas Cowboys under Bill Parcells, who won two Super Bowls with the Giants and is a Pro Football Hall of Famer. Kitchens was one of six assistants from that 2006 Cowboys staff who went on to become an NFL head coach, joining Anthony Lynn, Todd Haley, Tony Sparano, Mike Zimmer and Todd Bowles. Kitchens was also with the Arizona Cardinals from 2007-2017 before joining the Browns, which included five seasons working under Bruce Arians. Arians was twice named the AP NFL Coach of Year during his time with the Cardinals.

Where did Freddie Kitchens coach before the NFL?

Prior to jumping to the NFL, Kitchens spent seven years coaching on the college level with stops at Mississippi State (2004-05), North Texas (2001-03), Louisiana State (2000) and Glenville State (1999).Giants coach Joe Judge was with Kitchens for those two years at  Mississippi State, as Judge was a senior on the team in 2004 before sticking around as a graduate assistant the following year.

Kitchens started at quarterback for the University of Alabama from 1995-1997, throwing for 4,668 yards and 30 touchdown passes. He finished his Crimson Tide career ranked third in school history in career attempts, fourth in career passing yards and fifth in career completions. Kitchens also played baseball at Alabama his freshman and senior seasons, but a pectoral injury forced him to miss his sophomore and junior campaigns. Growing up in Gadsden, Alabama, Kitchens earned high school All-American honors and was named Mr. Football in the state of Alabama his senior season at Etowah High School.