How Reshat Mati, Predicted To Be The Next UFC Champion Has Gone Quiet 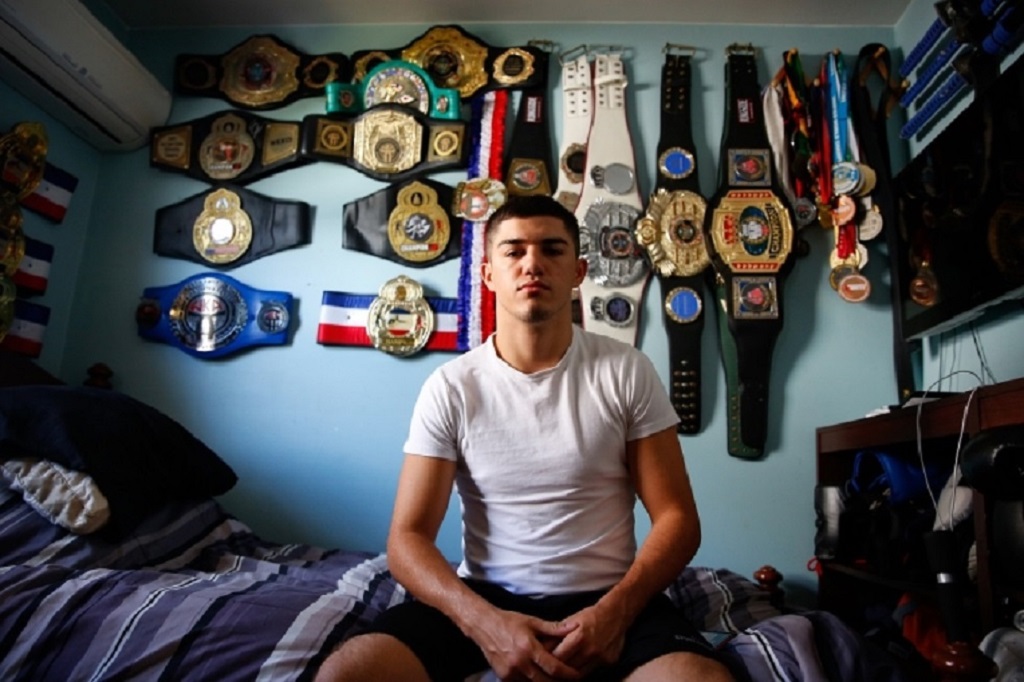 Back in 2013, the friendly 14-year-old from Staten Island was a fierce boxing and martial arts competitor. After numerous bouts and amateur titles, Reshat Mati gained international notice and an Internet following as he has 23 MILLION views of his fight when he was just 13 years old.

He was once a seven-time international kickboxing champion. He was so prodigious that he’s garnered millions of hits on Youtube. As a 14-year-old, Mati was featured in a Los Angeles Times story. He was dubbed a world champion before he became a world champion. Now he’s 21 years of age and swimming under the surface like a shark that you can’t really see unless it wants to be seen.

Reshat Mati: What Happened To The Hopeful In 2020?

He grew up protecting his sisters:

Reshat is the youngest of three. He took the blunt in scraps with oldest sisters Dianna, 24, and Lenora, 22. That sharpened him for days when as a grade schooler he went to the rescue of Lenora. She came home from school one day crying, because a kid called her names on the bus. Adrian asked Reshat what he did about it. When Reshat told his father he did nothing, Adrian fumed, “It better not happen again! You defend your sister.”

The next day, Reshat ended the name calling by pummeling the kid.

“Other than that, I never allowed Reshat to fight outside of the ring,” said Adrian, who was a soldier in an armored vehicle unit in what was then Yugoslavia, before moving to the United States prior to Yugoslavia breaking apart in the early 1990s. “Even when kids challenged him at school, which was all of the time, I told Reshat to take them to the gym. At least, that was controlled. To their credit, two kids in sixth or seventh grade came in. Reshat finished them. After that, no one challenged Reshat anymore.

His dad had a major influence on where his life would go:

“There were no video games,” Reshat’s father Adrian says of life in Albania to the LA Times. “The only thing we had was wrestling and boxing.”

His grandfather learned to box in the Albanian military, then taught Reshat’s father, who recalls there wasn’t much else to do while growing up in mountainous terrain near the country’s eastern border.

Immigrating to the U.S. in the 1980s, Adrian started a family with his wife, Ajshe, and decided to pass along the sport to his children. His eldest, Diana, boxed until she was 12. After that, he says, “she got into makeup and nail polish.” A middle daughter, Lenora, showed no interest.

Reshat, the youngest, was a different story. Adrian and Ajshe called him “the punching baby” because he would lie in his crib throwing crude facsimiles of hooks and uppercuts.

Reshat started taking self-defense classes at age 4 and was enthralled. He recalls sparring with a classmate. “I hit him with a body shot and he dropped,” he says. “I felt bad for the kid, but everyone started paying attention to me.”

Within a year, he had won his first tournament and acquired a reputation for fierceness. Video from a 2008 submission grappling tournament — the sport features elements of martial arts and wrestling — shows him ducking low to grab his opponent by the legs, lifting the boy onto one shoulder and slamming him down to the mat.

In other footage, a 10-year-old Reshat drives relentlessly across the boxing ring, heedless of the punches that come his way.

“He’s not afraid to get hit,” says Aureliano Sosa, one of his coaches. “He’s willing to take a shot to give three or four. Other kids won’t do that.”

Before he was famously dubbed the Albanian Bear, he was the Mad Dog, the Baby Punch and the Punch Baby. His father, Adrian, saw his infant son throwing jabs in the crib and decided the kid was born to be a sportsman.

His father, Adrian, tried introducing Reshat to soccer. The two went to a local park with artificial turf when Reshat was four. Very eager, Reshat went to kick the ball with his bare right foot—and picture Lucy from the Peanuts cartoon pulling the football away from Charlie Brown as he’s about to kick it.

Only, Reshat did it to himself, with throbbing consequences.

“I missed the ball completely, driving my right foot into the ground and broke it,” Reshat recalled, chuckling. “That ended my soccer career. I don’t think I ever tried kicking a soccer ball again. I can laugh about it now. It was a lesson to stay away from soccer. But if that didn’t happen, I don’t think I would be where I am now.”

Two months after his soccer mishap, Reshat was with his dad walking in New Dorp, New York, when they came by a Tiger Schulmann’s Martial Arts studio. Reshat was intrigued. He convinced Adrian to try it.

Before long, he was in tournaments. Soon after, he was winning. He earned the nickname “The Albanian Bear,” partly based on his Albanian heritage and his intensity at such a young age.

Most nights, as other boys settle down to watch television or text friends, Reshat travels with his father from gym to gym. His love of boxing, martial arts and wrestling — any kind of hand-to-hand combat — began when he was a toddler.

“My parents always wanted me to learn how to defend myself,” Reshat said. “It was mainly grappling and kickboxing. I loved that feeling of winning. It was like a drug, that I wanted more, and more, and more. I started to go into bigger tournaments.”

Even Reshat struggles to describe the innate ferocity that takes over, the thing that makes people call him the “Albanian Bear.”

Proof of his success covers the walls of his bedroom in a tidy home just up the hill from where Hurricane Sandy’s floodwaters crested last fall. Dozens of title belts — the kind made from colorful leather with oversized, shiny center plates — leave no space for other decorations.

“He’s starting to see the rewards,” his father says. “That’s what drives him.”

Reshat dismisses any suggestion that he craves celebrity. As he puts it, “When I win, I’m happy.”

But this was back when he was 14 years old. The belts that once adorned his bedroom walls are gone, safely tucked away in the family’s backyard shed. Mati seems to have discarded that phase of his life, for the most part.

How tall is Reshat Mati?

Where is Reshat Mati now?

As of 2020, Reshat Mati is promoted under Eddie Hearn’s Matchroom Boxing USA and managed by 2019 BWAA Manager of the Year Keith Connolly. Reshat could be the best among Connolly’s deep, talented group of prospects.

Eric Bottjer, Matchroom’s matchmaker and one of boxing’s keenest eyes for talent, says Reshat has the ability to win and a great mindset. Trained by Aureliano Sosa, Reshat suffered a minor setback when he underwent corrective surgery on April 4, 2019, on his right shoulder and this is one of the reasons for why the athlete seems quiet.

Since then, he’s won four fights, though his schedule, like everyone else’s, has been sidelined by COVID 19.

“Reshat has fought at amateur levels where he’s shown he’s a very good prospect,” Bottjer said. “He’s a good fighter. How good he’s going to be, we’ll see in three years. Reshat is in a great environment, where everyone pushes each other. The big thing I like about Reshat is that he likes to fight.

Reshat Mati has not participated in MMA and therefore doesn’t have any rankings in MMA. Reshat Mati is ineligible for regional rankings due to inactivity.  Fighters must have at least one completed MMA bout in the last two years to be ranked.

Lastly according to Boxing’s Official Record Keeper, it says that his status for Pro Boxing is active. His latest match was in 2020-03-07 against Abdallah Luanja.

Reshat Mati, was ranked No. 1 in the world in his age division by the International Kickboxing Federation at just 14 years of age.  From seven to 10, he began collecting title belts in Grapplers Quest and North American Grappling Association (NAGA) tournaments. Around seven, Reshat began going to Bars Boxing in Staten Island, where he was introduced to boxing by Akmal Zakirov. By then, Reshat was juggling grappling, Muay Thai, Jujitsu, mixed martial arts, and boxing.

By the time he was 16, he was already a  two-time Junior Olympic boxing champ, seven-time grappling champ, five-time jiu-jitsu champ, and two-time Muy Thai champ. He was also the top-ranked boxer and kickboxer in the world for his age. And he had never lost a mixed martial arts match.

MMA is one of the fastest-growing sports in the world, combine this with the wealth of Reshat Mati’s talents, and we’ve got one major athlete that’s ripe for all-time greatness.