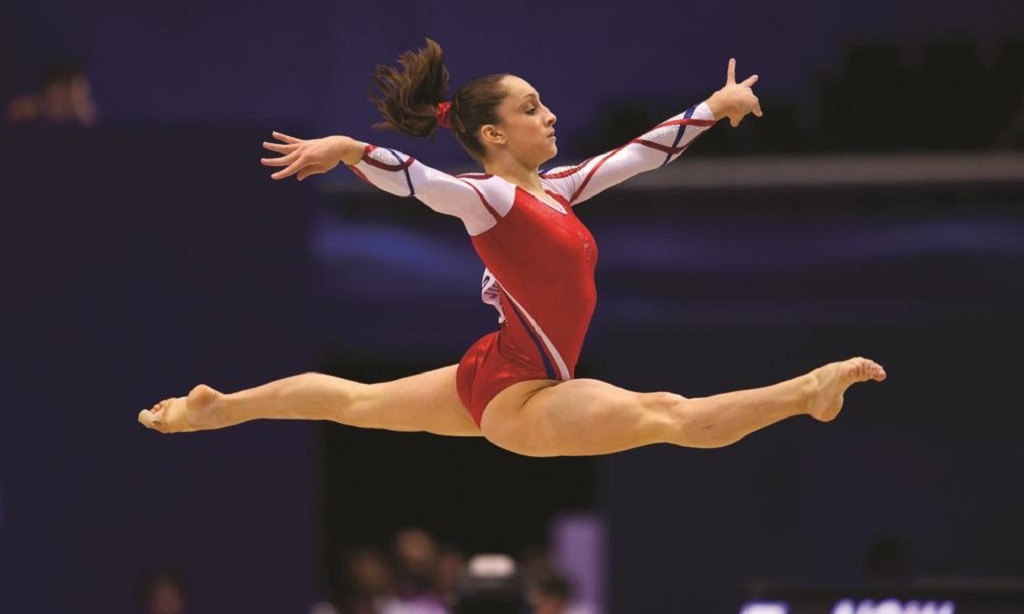 Jordyn Wieber is a former artistic gymnast who represented the US Olympic team during the 2012 London Olympics. She currently serves as the head coach of the Arkansas Razorbacks gymnastics team. As a member of the “Fierce Five” US Women’s Gymnastics team, she won a gold medal in the team competition. She was also one of the victims of the long running sexual abuse scandal in the US Women’s Gymnastics team where the team doctor Larry Nassar sexually abused them for a long time. Jordyn Wieber delivered her testimony in court in January 2018. Jordyn Wieber and other sexual abuse survivors of the US Olympic Team were given the Arthur Ashe Courage Award. Let’s find out more about this successful gymnast.

Jordyn Wieber: All You Need to Know

When was Jordyn Wieber born?

Jordyn Wieber was born on July 12th, 1995 in DeWitt, Michigan, USA. Her father is a director at a health care subsidiary and her mother is an emergency room nurse and an exercise physiologist.

How did Jordyn Wieber start gymnastics?

Jordyn Wieber’s parents noticed that she had bigger muscles than most people of her age when she was just three years old. So they decided to put her into gymnastics. In the beginning it was just a fun class for her where she jumped and played around. Then she stopped for a while and started learning dance. However, she went back to gymnastics at the age of four and started pursuing it seriously. She was handpicked for the Silver Stars program and kept going up from there.

Jordyn Wieber was named to the US national team for the first time after the 2006 National Championships. In 2007 Wieber competed at the U.S. Classic where she placed fifth in the all-around but won silver on balance beam and vault. At the 2007 National Championships Wieber won bronze in the all-around behind Rebecca Bross and Samantha Shapiro.Wieber was later named to the team to compete at the 2007 Junior Pan American Championships alongside Olivia Courtney, Mattie Larson, and Chelsea Davis. While there, Wieber helped the team win gold and individually she won silver in the all-around, behind Larson, gold on uneven bars and balance beam, and bronze on floor exercise.

Wieber was named to the team to compete at the 2008 Pacific Rim Championships but had to withdraw due to injury. In June, Wieber won her first national championships. She also placed first on vault and floor exercise, second on balance beam, and third on uneven bars.

In February 2009, Wieber competed at the American Cup in Chicago, Illinois. She won the all-around competition with a score of 60.200, beating 2008 Olympian Bridget Sloan. She was only 13 years old when she won the event, making her the second youngest American Cup champion after Tracee Talavera, who won in 1980.

In April 2010, was named to the team to compete at the 2010 Pacific Rim Gymnastics Championships in Melbourne, Australia alongside seniors Aly Raisman, Rebecca Bross, and Bridget Sloan and fellow juniors Kyla Ross and Sabrina Vega. While there she helped the American team place first. Individually, she won the all-around competition with a score of 59.550, finishing ahead of Ross, Vega, and Russian Anna Rodionova. She also won gold on the uneven bars and floor exercise and won silver on vault behind future Olympic teammate Kyla Ross. She placed fourth on the balance beam.

In March 2011, Jordyn Wieber participated in her first senior elite competition at the American Cup in Jacksonville, Florida, where she filled in for an injured athlete. She won the all-around competition with a score of 59.899. “It felt great to win my second American Cup title,” Wieber said. “It’s such an honor.”

Later in March, Jordyn Wieber also participated in the City of Jesolo Trophy in Jesolo, Italy. She performed well, finishing second in the all-around competition behind her teammate McKayla Maroney. She scored 57.700. The American team also went on to grab the team crown.

Jordyn Wieber also competed at Chicago’s Covergirl classic in July. She ranked first on the uneven bars and scored 15.200. She was tied for first place on the balance beam with Alicia Sacramone.

In August, Wieber competed at the Visa Championships in Saint Paul, Minnesota. After the first day, she said, “I wasn’t too nervous, but I just had to get a few jitters out. I definitely think floor and vault were really strong. I’m definitely going to focus on bars and beam on Saturday.” She won the all-around competition with a two-day combined score of 121.300. In the event finals, she placed first on uneven bars scoring 29.750, third on balance beam scoring 29.900 and first on floor scoring 29.900. Wieber said, “It feels really good. Just how aggressive and confident I was, I want to put into my training.”

Wieber was a finalist for the James E. Sullivan Award, which is given annually by the Amateur Athletic Union.

Jordyn Wieber also made an appearance on The Ellen DeGeneres Show in January of 2012.

At the beginning of March, Wieber competed at the American Cup in New York City, New York. She won the all-around competition with a score of 61.320. “It feels amazing to win my third American Cup,” said Wieber. “I’m really excited to get started with the Olympic year.”

About her performance in the 2012 Pacific Rim Gymnastics Event, Jordyn Wieber said, “I was pretty happy that I hit four solid events, because it’s been a few meets since I’ve (done that).” In the event finals, she placed sixth on balance beam scoring 13.700 and first on floor scoring 15.125.

In June, Wieber went to St. Louis Missouri to compete in the Visa Championships Wieber competed at the Visa Championships in St. Louis, Missouri. She won the all-around competition with a two-day combined score of 121.900. In the event finals, she placed fifth on uneven bars scoring 30.100, fifth on balance beam scoring 29.750, and second on floor scoring 30.500. “I’m just happy to be here, especially in the Olympic year,” Wieber said. “I feel like all my hard work is paying off.”

In early July, Wieber competed at the Olympic Trials in San Jose, California. After the first day, Wieber said, “Today went pretty well. My main goal was to go out there and do confident routines. The crowd was awesome – I love seeing the stands full and hearing them cheer before I go up for a routine.” She placed second in the all-around competition with a two-day combined score of 123.350. In the event finals, she placed fourth on uneven bars scoring 30.700, third on balance beam scoring 29.950, and second on floor scoring 31.000. Wieber was chosen as a member of the American team for the 2012 Summer Olympics. “It feels amazing to be an Olympian,” Wieber said. “This is definitely the best day of my life and knowing that all of my hard work has paid off is amazing. I’m just so proud of each and every girl who competed here today.”

At the end of July, Wieber competed at the 2012 Summer Olympics in London, United Kingdom. In qualifications, she placed fourth overall with a score of 60.032 behind teammates Aly Raisman and Gabby Douglas, meaning that she would not advance to the all-around final due to the rule limiting participating countries to having a maximum of two competitors in the all-around final. Wieber would still compete in the team final where the American team qualified first and the floor final where she qualified sixth with a score of 14.666. She said, “It was hard because of course I wanted that spot, but I also wanted Aly to do her best also for the team and for herself. It’s always been a dream of mine to compete in the all around at the Olympics and shoot for that gold medal. I’m really proud of Aly and Gabby both and I’m happy that they both made it to the all around and I’m glad that I’ll be able to help the team out in team finals.” Her coach, John Geddert said, “I’m basically devastated for her. She has trained her entire life for this day and to have it turn out anything less than she deserves is going to be devastating. She has waited her entire career for this. She is happy for her teammates and disappointed that she doesn’t get to move on.”

In the team final, Wieber contributed scores of 15.933 on vault, 14.666 on uneven bars, and 15.000 on floor toward the American team’s first-place finish. Wieber is considered to be a confident and steady “lead off” gymnast. She “set the table” for the rest of the American team during finals,[failed verification] posting consistent scores. Wieber said, “I was pretty disappointed, but I had to put it together mentally, especially for this team. A team gold medal was also officially a goal of mine, and I had to pull myself together and move on and be stronger mentally for the team. The feeling was incredible. To have this gold medal around your neck, it’s really an indescribable feeling.” The team was nicknamed the “Fierce Five”.

In the floor final, Wieber placed seventh with a score of 14.500 after going out of bounds on her second tumbling pass (her score from the team final would’ve been enough to win the bronze medal). She said, “I knew that it was going to have to take a lot of details in the routine with all the landings. I did step out of bounds, and I knew at that point that it wouldn’t be enough. I tried to still fight through and finish the routine strong.”

After the Olympics were completed, Jordyn Wieber announced to the world that she had been competing in events with a stress fracture all along. She suffered it in her right leg because of a nagging heel injury. She said, “Once I got out on the floor, adrenaline took over and I didn’t really feel it that much.” She was forced to limit her training to protect the injury. “That affected me a little bit,” Wieber said. “I know that eventually affected my performance. In the end, I have no regrets. I know injuries come with the sport and you have to deal with it and I’m glad I fought through and finished out to the end.”

Jordyn Wieber had been consulting Larry Nassar from the age of eight. She spent her childhood in Lansing and Larry Nassar used to work at the Michigan State University. According to Wieber, Larry Nassar continued to sexually abuse her, convincing her that the abuse was apart of necessary medical treatment. Here’s what Jordyn Wieber said about the ordeal: “Our bodies were all hanging by a thread when we were in London. Who was the doctor that USAG [USA Gymnastics] sent to keep us healthy and help us get through? The doctor that was our abuser. The doctor that is a child molester. Because of my shin, I couldn’t train without being in extreme pain, and it affected the number of routines I could do to prepare before the competition. And, ultimately, it made me feel less prepared than I should have been. I didn’t qualify to the all-around competition, and I went through a dark time right before we won the team gold.

Now, I question everything about that injury and the medical treatment I received. Was Larry even doing anything to help my pain? Was I getting the proper medical care, or was he only focused on which one of us he was going to prey on next? What does he think about when he massaged my sore muscles every day? Now I question everything.”