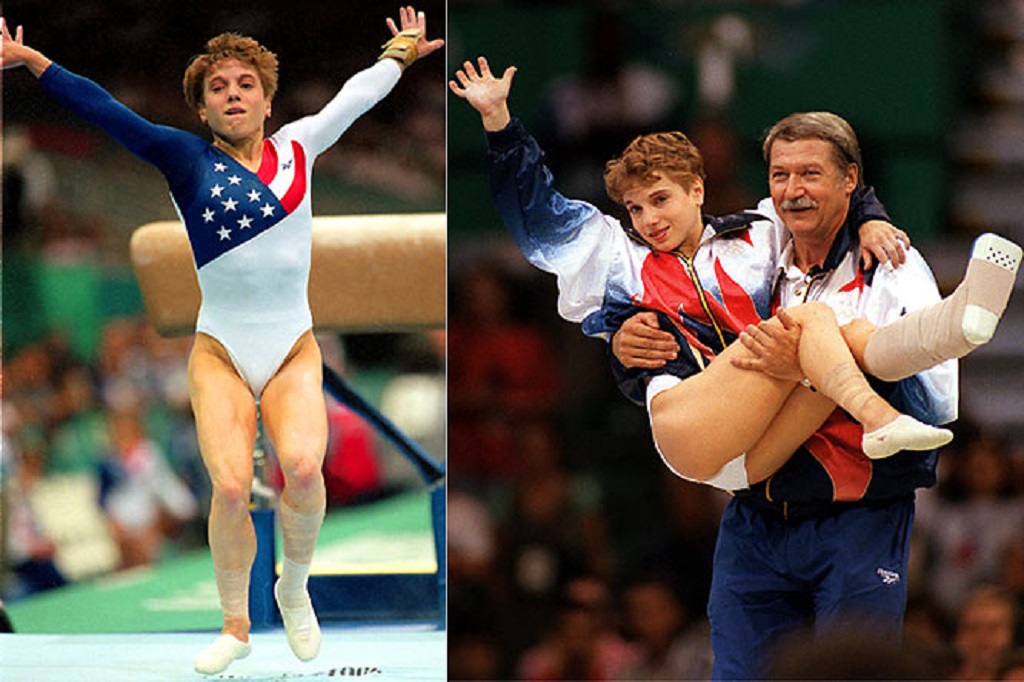 Athlete A on Netflix is where I first saw Kerri Strug. The story reveals unbelievably young gymnasts who survived the abuse of Dr. Larry Nassar, a former trainer for USA Gymnastics. Not only was the documentary gripping, but you realize how training affects young children where a man got away with sexually abusing women and girls over 20 years. The brilliance of this particular documentary, directed by Bonni Cohen and Jon Shenk, doesn’t immediately dive into the case against Dr. Nassar. It starts with the narration and broader understanding of the toxic culture of USA Gymnastics (USAG) that led to gymnasts feeling like they had to overcome catastrophic injuries like Kerri Strug asking if it’s okay if she didn’t have to go back for her second vault with a broken ankle, and men like Nassar and mentally abusive coaches getting away abuse for decades.

Did Kerri Strug break her ankle?

During the 1996 Olympics, a small girl would shock the world with her strength and determination that contradicted her size. She was Kerri Strug and yes, she broke her ankle.

It was the night of the women’s gymnastics team competition and Kerri would face her competition with a third-degree lateral sprain as her teammates’ performances had a few costly mistakes and injuries. When it all came down to the final competitor in the final event of the vault – Kerri had to get a near-perfect score to clinch the gold!

In 1996 gymnastics, you always vaulted twice, and your final score was the best of two.

Therefore when Kerri performed her first vault and, sadly, missed her landing, the young girl had one more chance to get the score needed.  The second vault would make history as she broke her ankle and limped back to the runway, determined to do her last vault.

For the second vault, Kerri ran down the runway, vaulted into the air, and stuck her landing! In the sport, moving the foot after touching the air is a big no-no if you want to win the gold. Landing perfectly with a broken ankle, Kerri immediately fell to the ground in pain after.  Her coaches rushed to her side awaiting the score and before they knew it -Kerri had successfully earned her team the gold medal! By putting her own pain aside to do what she had to do for her team, Kerri inspired everyone at the arena and all over the world!

How many medals did Kerri Strug win?

Kerri Strug received one gold medal during the 1996 olympics when she performed her second vault, a dangerous feat, correctly and mathematically (for the US team) to clinch the gold. Poor Kerri Strug suffered from third-degree lateral sprain and tendon damage while she competed but the Americans would still have won the gold by a margin of 0.309 points had Strug not performed a second vault.

Where did Kerri Strug go to college?

Kerri Strug decided to retire from her career in gymnastics although she was highly successful doing ads for almost everything. She could have continued with endless sponserships, but she decided to enroll in college. She went on to study at UCLA for two semesters before transferring to Stanford University; she has a Bachelor’s degree in Communications and a Master’s in Sociology. During her collegiate years, she pledged Kappa Alpha Theta sorority and did a Semester at Sea.

Upon graduating, Strug went on for a time to work as an elementary school teacher in San Jose, Calf. Later on she shifted to Washington, D.C where she landed a job as a staff assistant with the White House Office of Presidential Student Correspondence.

With that on her resume as well, it led to subsequent work within the Treasury Department and the Justice Department’s Office of Juvenile Justice and Delinquency Prevention — the latter of which she worked for in D.C. . She worked here for 12 years before going back to work for the Department from her current home base of Tucson, Ariz. as a full-time remote worker.

All in all, Kerri Stug never truly walked away from gymnastics entirely. In addition to penning a few books on the subject, she stays connected to the sport by booking occasional speaking engagements and public appearances. Last but not least if you’re ever curious about this Olympic powerhouse just head to Twitter!

How old is Kerri Strug now?

Who was Kerri Strug’s coach?

Kerri Strug trained with Bela and Martha Karolyi most of her elite career, only training with other coaches when Bela Karolyi temporarily retired.

Did Kerri Strug join a college?

After the Olympics, Strug went to UCLA, before being transferred to Stanford University. She worked as a project manager within the Treasury Department and the Justice Department’s Office of Juvenile Justice and Delinquency Preventio.

Where is Kerri Strug now?

1. Kerri Strug was the youngest member of the women’s team in 1992:

During the Barcelona Olympics Kerri helped the Americans win a bronze behind the former Soviet Union (called the Unified Team at this Olympics, due to the recent breakup of the USSR) and Romania. She placed 14th all-around in preliminaries but was in fourth place among the U.S. gymnasts. Only three gymnasts per country were permited to advance to the all-around finals, so she did not qualify.

2. Kerri Strug had fallen down before as well:

After the 1992 games, Kerri Strug’s coach infamous Bela Karolyi who carried her in 1996 announced his retirement and Strug went to several different gyms, including Dynamo Gymnastics, Shannon Miller’s club. Strug placed third at the 1993 U.S. nationals and made the floor finals at worlds that year, landing in sixth place.

In 1994, Strug suffered a scary back injury from a fall from the uneven bars but was able to get back on her feet again in time to help the team win a silver medal at Worlds. In 1995, she earned a bronze as part of the U.S. team, and when Karolyi came out of retirement which we clearly saw in 1996, loyal Kerri returned to his gym.

Strug earned her first major all-around title at the American Cup in 1996. She overthrew her rivals Svetlana Boguinskaya and Oksana Chusovitina to take the top spot, tying for the individual event titles on beam and floor as well.

4. The face of the Atlanta Olympics:

Kerri Strug was one of the several veterans who joined the roastr for the 1996 U.S. Olympic team: Shannon Miller and Dominique Dawes had competed at the ’92 games, and Amanda Borden was an alternate that year. Russia and Romania were neck and neck with the US as they were the team who was favorite to win gold.

Russia led after compulsories, but the U.S. pulled into the lead early in options and looked like they’d win it. In the last rotation, however, Dominique Moceanu didn’t stick her landing and fell on both of her vaults, and Strug fell on her first.

Strug landed her second vault despite an ankle injury and ensured the U.S. team its first gold ever in women’s gymnastics. Strug’s ankle became so severely damaged that it was tough for herto compete in the all-around, vault and floor finals, but she became the face of the Atlanta Games.