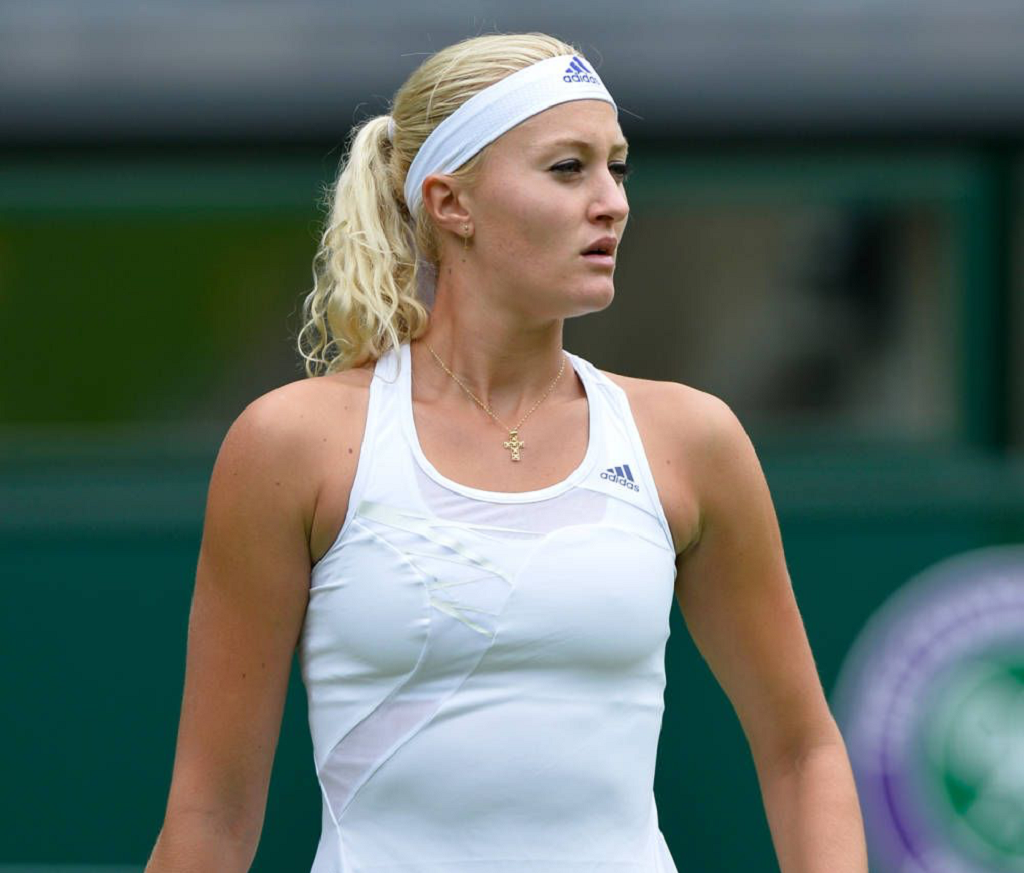 Kristina Mladenovic is a professional French tennis player who has carried the hopes of her country at Roland Garros for the last few years. She turned pro in 2009 and went on to win one singles and 17 doubles titles on the WTA Tour, as well as four singles and seven doubles titles on the ITF Women’s Circuit. As you can see she has found decent success in singles, but has been a huge hit in doubles, winning multiple Grand Slams in both women’s doubles and mixed doubles. Mladenovic made her singles breakthrough at the 2017 French Open, reaching the quarterfinal there after defeating Garbine Muguruza, but has tasted plenty of Slam success in doubles. She has won four Grand Slams already – two in women’s doubles and two in mixed doubles – and is poised to add to that collection in the years to come. The French professional tennis player achieved a career-high singles ranking of World No. 10 on October 23, 2017. She won the 2013 Wimbledon and 2014 Australian Open mixed doubles titles alongside Canadian Daniel Nestor, the 2016 French Open women’s doubles with Caroline Garcia, and the 2018 Australian Open with Timea Babos.

She began playing tennis at the age of 3 and participated in the Junior leagues in 2006, and became the European Under 14 singles champion in 2007.

French tennis player Kristina “Kiki” Mladenovic has enjoyed a lot of success in her tennis career, especially in the doubles, currently ranked number 3!

Kristina has been highly successful in doubles, winning in the Australian Open in 2018 with fellow player Timea Babos. The two have also lifted the doubles cup recently at the French Open. Talking about the highest ranking in singles, the French player was ranked 10th in October 2017. She was ranked number 1 in the doubles rankings in June this year.

Mladenovic reached the first WTA final, losing to Stosur in Srasbourg, and qualified for the WTA Finals in Singapore in doubles with Babos: went 1‐2 in the group stage.

In 2017 Mladenovic captured her first career title at St Petersburg (d. Putintseva in F) and passed the $5 million prize money mark. She made semifinals at Indian Wells breaking into the Top 20 for the first time in career. In Stuttgart, she lost the title match to Siegemund after defeating World No.2 Kerber en route to the final, her joint‐best career result by ranking.

She also reached the first final at WTA Premier Mandatory level at 2017 Madrid (l. Halep in F) and the quarter-finals at Roland Garros. Endured a disappointing second part of the season, having not won a single match after the first round in Washington DC.

She won her first round against Elise Mertens in a match before offensive reigning Australian Open finalist Venus Williams to spread the quarterfinals at the ST Petersburg trophy 2017. She defeated the defending champion Garbiñe Muguruza in 3 sets to advance to the quarterfinal of the Grand Slam match.

Best Finish At Each Of The Four Grand Slams:

Mladenovic is capable of playing from anywhere on the court, and uses her movement to aggressively take the ball on.

The Frenchwoman likes to set up points with her serve, either following it up with a big forehand or a net approach. Mladenovic has a conventional two-handed backhand, and throws in the one-handed slice a fair bit too. She also uses the technique of the drop shot and lob as surprise tactics, doing her best to keep her opponents on their toes all the time.

Although she has enjoyed a lot of success on clay and hardcourts, her favorite surface is grass.

Mladenovic’s forehand is her strongest point. She is particularly dangerous with her forehand when she draws a short reply from her opponent; she doesn’t usually have trouble finishing points with the stroke.

Mladenovic has a big first serve, which often comes to her aid when she’s in trouble. Her second serve, however, is quite inconsistent, and she can be guilty of making too many double faults on occasion.

Mladenovic’s movement around the court is fair enough, but she can struggle at times when pushed behind the baseline. She also makes a few mistakes with her shot selection on occasion, which can lead to a few too many unforced errors.

Currently 26 years old, Kristina was born on 14th May 1993 in Saint Pol Sur Mer, France. Kristina’s parents are of Serbian origin. Her father Dragan, played handball and even won gold while participating in the Olympics. Her mother Dzenita played volleyball professionally as well. Her parents moved to France in 1992, a year before Kristina was born. Kristina has a brother named Luca who plays soccer.

Coming from a sporting family, Kristina started playing tennis at 8 years old when she was introduced to the sport by her parents.

Mladenovic has been given the nickname ‘Kiki’ and she was a successful junior player, winning the 2009 French Open girls’ title and ascending to the World No. 1 ranking later that year. Did you know? She received a wild card at the 2009 Australian Open and lost to the 14th seeded player, Patty Schnyder.

The Frenchwoman has been in a relationship with fellow tennis pro Dominic Thiem since 2017. The two are very outspoken about their relationship on social media, and have won a huge number of fans with their likable camaraderie.

Dominic would reach the final in that tournament but lost out to eventual champion Rafael Nadal. Meanwhile, Dominic is currently ranked at 5th in the ATP rankings.

Also, Kristina and Dominic have been spotted together a number of times. On social media, the couple has not shied away from showing their affections towards each other. On Instagram, Kristina is fond of posting some very lovely pictures of the two for her followers and it seems they really enjoy each other’s company.

Other Facts About Kristina Mladenovic:

Kristina Mladenovic is 26 years old as she was born in 1993.

She began playing tennis in the Junior leagues in 2006, and was crowned the European Under 14 Singles Champion one year later.

Kristina’s current place of residence is in the city of Dubai.

Her family moved to France in 1992 when her father was signed by Dunkerque HGL.

She started playing juniors in May 2006.

She turned professional in 2009.