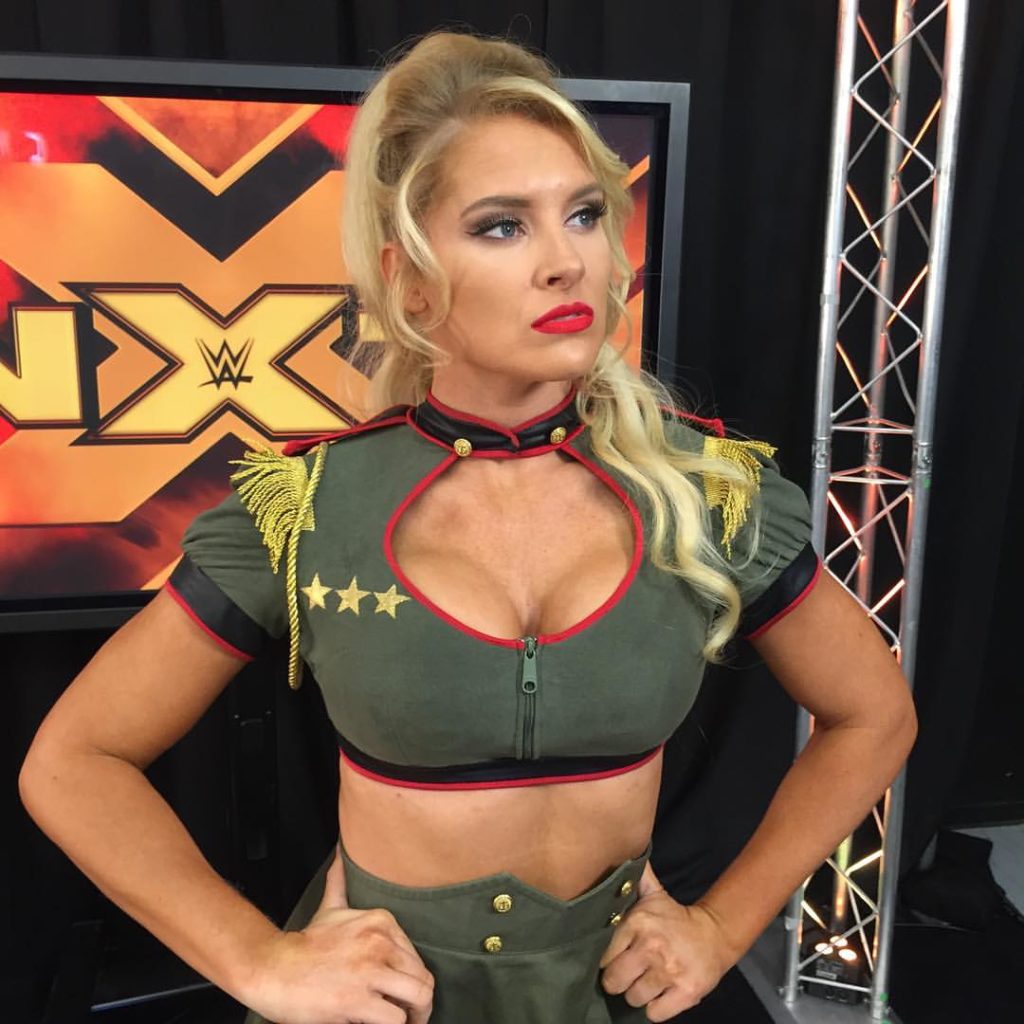 Macey Estrella-Kadlec, known by her ring name Lacey Evans, is a female professional wrestler, working with World Wrestling Entertainment for the Smackdown brand. The world of the WWE has been shaken up in recent years as the pre-labeled Divas division has been bolstered time and again, leading to an increase of female talent! Lacey Evans, for example, has been seen to be more than just a manager or just another pretty face. She came in to show just what they can do and dazzled the WWE universe with their athleticism and their impressive in-ring skills.

While some performers take a while when it comes to really catch on with the fans, Evans has been given kind of an easy in, or at least it seems that way, since she began a feud with Becky Lynch. Soon, she became a professional wrestler who signed to the WWE NXT promotion in 2016 and earned her first televised victory in January 2018. She was previously an American Premiere Wrestling World Heavyweight Champion.

Macey now known as Lacey Evans is a former U.S. Marines military police officer with the Special Reaction Team before becoming a professional wrestler. At the time when Macey was a part of the U.S. She was also involved in wrestling through a staff sergeant promoting independent shows. She started to wrestle in the main event of the show and was a member of the Marine Corps SWAT team.

Evans joined the Marines at age 19. She started to show promise from the start, graduating out of boot camp as her company’s highest-ranked shooter.

Macey Estrella-Kadlec (her real name) went on to serve as a member of the Marine Corps Special Reaction Team, but left the service after five years, having achieved the rank of sergeant. Anyone with military experience knows just how remarkable that is.

Here’s a neat little factoid. Evans’s real name is Macey Estrella, but her ring name is her sister’s real maiden name – and it’s a pure coincidence how that came about, according to an interview with The Post and Courier in 2017:

“When we had to submit a list of names that we like, I really liked Lacey Loretta. They (NXT) chose the last name Evans, and the first name Lacey which, believe it or not, is my sister’s name. So they made it Lacey Evans, which was my sister’s legal name up until the time she got married.”

4. Getting into WWE and Career:

Macey or Lacey Evans signed the World Wrestling Entertainment contract in 2016 and was assigned to its developmental territory NXT, where she had her debut match in a battle royal in which she lost.

Raw brand official main roster debut at the women’s Royal Rumble at number 1. Evans began her first feud with  Raw and SmackDown Women’s Champion Becky Lynch. She challenged Lynch to a Raw Women’s Championship match at Money In the Bank pay-per-view, in which Evans lost. Evans also helped Charlotte Flair to win the SmackDown Women’s Championship from Lynch. At Extreme Rules, Evans teamed up with Corbin against Lynch and Rollins for their respective titles in the Winner Takes All Mixed tag team match, in which they failed to win the titles.

In 2018, Evans made her debut on WWE’s main roster Raw brand where she had her debut by entering women’s Royal Rumble match at number 1, however she failed to bag the victory.   Evans began her first feud with  Raw and SmackDown Women’s Champion Becky Lynch. She challenged Lynch to a Raw Women’s Championship match at Money In the Bank pay-per-view, in which Evans lost. Evans also helped Charlotte Flair to win the SmackDown Women’s Championship from Lynch. She continued her feud by joining Corbin against Rollins and his real-life partner Becky Lynch. She became a special guest referee for the Universal Championship match between Rollins and Corbin.

In this photo, a very young Lacey is with her boyfriend whom she is currently married to.

Macey Estrella-Kadlec was born on March 24, 1990, in Georgia, United States. Macey has had a very messy life from a very early age, where her parents went through legal issues and were ever affected by depression and drug addiction.

Her mother left them when she was 10 years old, so Lacey Evans was raised by her father, whose life was also about drugs and eventually died due to a drug overdose.

Evans and her siblings lived a temporary lifestyle as her drug-addicted father looked for construction work.

“We traveled a lot, so I honestly lived in a tent for a while in Alabama and Louisiana. I spent a lot of time in Texas. I grew up all over the South. My dad just kind of followed construction. Between drugs, it got him in and out of trouble, so we were traveling a lot. I never was anywhere for long.”

Evans once revealed that her father was physically abusive:

“My father had a very bad temper and was very cruel while I was growing up. He was physically abusive. It created lasting problems, and this is something as a family that we deal with constantly to this day.”

Evans’s father died of a drug overdose and could never see the WWE starlet’s dreams realized.

Evans attended Indian River State College in Fort Pierce, Florida but we don’t know if she graduated from it.

Lacey Evans circle consisted of drug addicts and so she decided to pull herself out of poverty:

“This is the life I saw and I knew I would never become that,” Evans said. “While everyone was giving up around me, I had to make sure I didn’t.”

Evans took control of her life (when her elders couldn’t) and through a lot of hard work and sacrifice, it paid off.

Her first money making profession was at the age of 14, washing dishes. During high school, she decided to take up wrestling and was crowned State Champion. After high school, she worked as a nursing assistant to put food on the table.

“I never quit,” she said to ESPN. “I had to live in my car one time in this whole process and I hated every minute of it because that’s what I came from. But I had to. But that was alright because I knew I could [do it].”

Lacey Evans resides in Orlando, Florida, the United States with her husband Alfonso Estrella and a daughter named Summer.  The couple reportedly started dating when she was still 14 years old.

Lacey Evans drove into the controversy after she was allegedly stopped by Canadian police for a routine traffic stop. She showed a tantrum by saying ‘ Do you who am I?” She also posted a video on her Twitter saying ” 1.Canada is terrible. 2. You know exactly who I am. 3. You will be speaking to my lawyer. #YaNasty.” She was later criticized by Canadian citizens for disrespecting them.

10. She got her first match one week after going to her first show:

While most wrestlers grew up watching the business, Macey now known as Lacey Evans readily admits that she knew absolutely nothing about pro wrestling until she was in the Marines.

It’s not that Evans wasn’t entirely unfamiliar with a wrestling mat – because during middle and high school she saw sports as an escape from her tumultuous home life.

One of those sports was wrestling – and she won a state championship!

11. Her staff sergeant introduced her to wrestling:

Introduced to professional wrestling, through a senior, Lacey Evans once said that she was turned on to the idea by someone else that thought she had some potential.

On a particular weekend, a staff sergeant who moonlighted as a pro wrestler beckoned her to a show. Before she knew it – Evans was hooked and she competed in the ring herself the very next weekend:

“I had never watched [wrestling] prior to that, wasn’t a fan and didn’t know anything about it. I watched one show and I was actually performing in the ring the next weekend with that same staff sergeant.”

12. She made her premier in 2015 for an independent organization:

Like a lot of other wrestlers Lacey had to prove that she had what it took before she could come to the WWE. Luckily Lacey was able to claim the mantle of a wrestler, thanks to the conditioning and the athletic ability from being a Marine!

It’s likely that a lot of people, unless they watch NXT religiously, noticed that Evans had made her way to the big-time, or at least as close to it as she could get without being on the main roster.

Some  ‘feuds’ on the WWE are unreal and scripted but it seems as though Lacey might have said something, real or not, that kind of insulted the WWE legend!

15. The feud between her and Becky Lynch has been pretty entertaining:

Becky Lynch has been truly entertaining consistently in her career so far, even when she went heel for a bit, but the feud between her and Lacey has so far managed to become something that has heated up quite a bit and involved more than just the two of them as Lacey does what she can to gain an advantage, as per the script obviously.

16. She started her own construction business while in the Marines:

Could be the experience of growing up with a father who worked in the business, that inspired the Marine to start this job! Lacey Evans was only 19 when she joined the Marines, so we are not sure if she still has this business or not.

If things ever don’t work out in the WWE, at least that she has something else to depend on, because the once hard working 14-year-old now-adult knows how to go out and get what she wants.

You might want to argue that there’s a severe pay gap in the WWE and you’d be right, but only insofar as to who’s paid more because of the time they’ve put in and how popular they are with the fans.

Macey or Lacey Evans was born on 24 March 1990. She was in her early 20s when she entered the wrestling realm and her trajectory depends on what kind of story arcs can be created for her in the months and hopefully years to come.