Lane Kiffin: 10 Interesting Things To Remember About The Coach 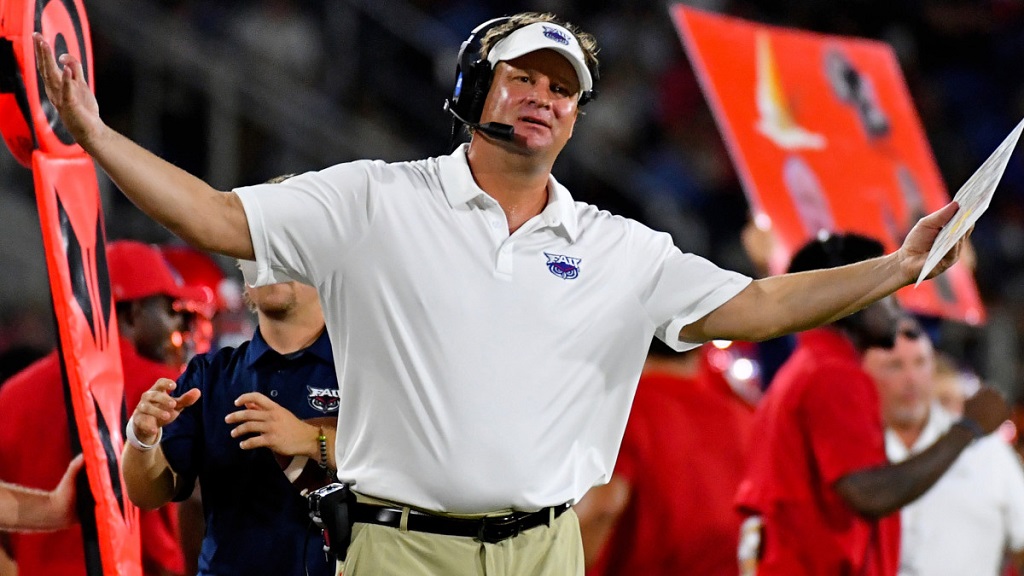 Lane Kiffin, the son of legendary defensive coordinator Monte Kiffin, played quarterback at Fresno State for three seasons in the mid-90s and then began his coaching career as a student assistant there. He is majorly thought of as one of the top offensive minds in football, who was influential in changing Alabama’s offense from a pro-style set to a diverse spread offense. FAU will be his fourth head coaching stop, more than three years after he was fired at USC. Lane has agreed to become Ole Miss’ next head coach and even went 26-13 and led the Owls to two Conference USA titles over UAB. Many know the man as one of the most controversial figures in all of sports history – some people laugh while others turn into an angry mob. Lane Kiffin’s famous rise and fall have led to him going from coaching prodigy to internet meme to redemption storytime. So, here are a few facts about the coach that might interest you:

Coaching was always in Lane Kiffin’s blood, as the son of legendary defensive coach Monte Kiffin — who was on the staff of two national title teams under Bob Devaney at Nebraska in the 1970s and was the architect of the vaunted “Tampa 2” defense for the Super Bowl XXXVII winning Tampa Bay Buccaneers.

But Lane started out as a backup QB at Fresno State in the mid-1990s. As fate would have it, Fresno State was loaded at QB by the time it was Kiffin’s “turn” as a senior. The Bulldogs boasted two future NFL QBs, Billy Volek and true freshman David Carr, who went on to become the No. 1 pick in the 2002 NFL Draft (and is the older brother of fellow Fresno State alum and NFL QB Derek Carr). Kiffin’s inability to compete with NFL-caliber passers ultimately led to the start of his coaching career — in the “most Lane Kiffin way” possible.

David Carr might be the only man on earth to successfully give this entertaining story of how Lane Kiffin’s coaching career began:

“He was a fifth-year guy who didn’t want to give his job up to a freshman,”…..His last day as a Bulldog player was when he came out — we were supposed to be in full pads — and he came out with shorts and a t-shirt on. And (offensive coordinator) Jeff Tedford says, ‘Lane, what are you doing?’ And he’s like, ‘Well, I figured I could come out here in shorts and a t-shirt because you’re just gonna give all my reps to Dave.   “And he sends him in, ‘Get off the field!’ So he leaves practice. Disappears. Okay. Lane quit, right? Well, Monte Kiffin is Lane’s dad. Monte’s a coach with the Tampa Bay Buccaneers, defensive coordinator at the time. Monte’s not having this, right? About 30 minutes goes by, Lane comes back out without his helmet, shorts and a t-shirt. And he is now the wide receivers assistant coach. That’s how his coaching career began. Yeah. That day.”

4. Lane Kiffin coached several “Dream Jobs” … all of which turned into a nightmare:

After leaving Fresno State, Kiffin experienced a meteoric rise through the coaching ranks, with one year stops at both Colorado State (grad assistant) and the NFL’s Jacksonville Jaguars (offensive quality control) before being hired by Pete Carroll at USC in 2001. Between  2001-06 (i.e during his time at USC),  Kiffin was hired as a tight ends coach, wide receivers coach, passing game coordinator and offensive coordinator, winning multiple national championships during the Matt Leinart and Reggie Bush golden era.

Kiffin’s reputation as a rising star caught the eye of Oakland Raiders owner Al Davis, who hired the 31-year-old in 2007, making Kiffin the youngest head coach in the NFL’s modern era. Kiffin joined John Madden, Mike Shanahan and Jon Gruden, as the latest thirtysomething to be hired by Davis, who was 77 when he hired Kiffin. The honeymoon didn’t last long, as the Raiders drafted LSU QB JaMarcus Russell No. 1 overall in 2007 and Kiffin was fired after going 5–15 in just 20 games at the helm. During a lengthy press conference, Davis called Kiffin a “flat-out liar,” among other things:

“ I think he conned me like he conned all you people … I reached a point where I felt that the whole staff were fractionalized, that the best thing to do to get this thing back was to make a change. It hurts because I picked the guy. I picked the wrong guy”

Due to Davis’ reputation as an overbearing boss and micromanaging owner, Kiffin was given the benefit of the doubt and hired by the University of Tennessee prior to the 2009 season, replacing retiring national champion Phillip Fulmer. At 33, Kiffin became the youngest active FBS head coach, while also bringing his then-69-year-old father, Monte, as his defensive coordinator. Kiffin lasted only one season, going 7–6 — with wins over Georgia and South Carolina, and losing to Alabama on a blocked field goal — before jumping ship to USC.

In 2010, Lane Kiffin followed in the footsteps of Carroll, who was called in for the NFL’s Seattle Seahawks before sanctions were levied on USC. Kiffin had early success despite dealing with a bowl ban and scholarship sanctions due to the wrath of the NCAA over Reggie Bush’s improper benefits and “lack of institutional control” at USC. Kiffin went 8–5, 10–2 and 7–6 in his first three seasons with the Trojans. But Kiffin didn’t make it past his fourth season and was fired in lieu of a 3–2 start. Immediately after a 62–41 loss at Arizona State, Kiffin was fired at the airport — allegedly on the tarmac at 3 a.m.

From 2014-16, Kiffin was Alabama’s QB coach and offensive coordinator. Although he experienced the success normally associated with Nick Saban’s teams, Kiffin did not necessarily experience the requisite respect that usually goes hand-in-hand with Bama’s dominance. Kiffin’s tenure in Tuscaloosa is highlighted by…Getting yelled at by Coach Saban… The Alabama team buses aren’t here anymore. Lane Kiffin is being left behind by the team bus — twice — following the national title win over Clemson and CFB Playoff semi-final media day.

There were also a few off-field rumors surrounding Kiffin, who was dismissed by Saban and replaced by former USC buddy Steve Sarkisian a week prior to Alabama’s national title rematch with Clemson following the 2016 season.

6. Kiffin bails on Tennessee, everyone hates him:

After just one 7-6 season in Knoxville, Kiffin left the Vols to return home to California and coach the USC Trojans. He was labeled as a snake, a weasel, and a traitor by just about anyone who had anything invested in Tennessee football.

Lane and his new ex-wife Layla Kiffin got married in 2004. The two of them met through Lane’s father, Monte Kiffin, who was the defensive coordinator of the Tampa Bay Bucs during Layla’s career working in the Bucs’ special events department after graduating from the University of Florida. Just like Lane has a famous parent, Layla shared this same feature as well, being the daughter of former Florida, NFL and USFL QB John Reaves.

The couple have three children together — daughters Landry (b. 2005) and Pressley (b. 2007), and son Monte Knox (b. 2009), who was reportedly born after the city of Knoxville during Lane’s lone season at UT (a rumor that Lane has both seemingly confirmed and denied).

The pair split for good in 2016 but appear to remain on good terms as the parents (despite their divorce) of three children together. Lane’s personal life, however, is (allegedly) complicated. Off-field rumors have swirled around Kiffin, involving a hilarious alias “Joey Freshwater” that he uses to hit on girls at college bars and rumored affairs that involved a fake Tinder account (according to and exposed by Auburn grad Ashley Spry), former University of Alabama secretary Carly Settel, a high-profile booster’s daughter and even Nick Saban’s daughter, Kristen.

With Lane Kiffin, who knows what to believe?

9. Lane Kiffin today serves as one of the best online sources of comedy:

When Kiffin probably knew his time as head coach of the Oakland Raiders was running short, he called on Sebastian Janikowski to attempt a 76-yard field goal with just a couple of seconds left before halftime. This was on Sept. 28, 2008, after 18 months in the Bay Area.

Janikowski missed the kick by about 25 yards and Lane Kiffin was laughed at for his coaching.

Kiffin has inspired his bitter ex-fans and he’s also been the source of tons of comedy — both as a Twitter troll and as the butt of jokes, so to speak. At only 43, Kiffin should be around to provide a few laughs (both intentional and unintentional) for many years to come.

After losing to Washington State at home, Kiffin lost any remaining local goodwill. This happened at the end of the WSU game: