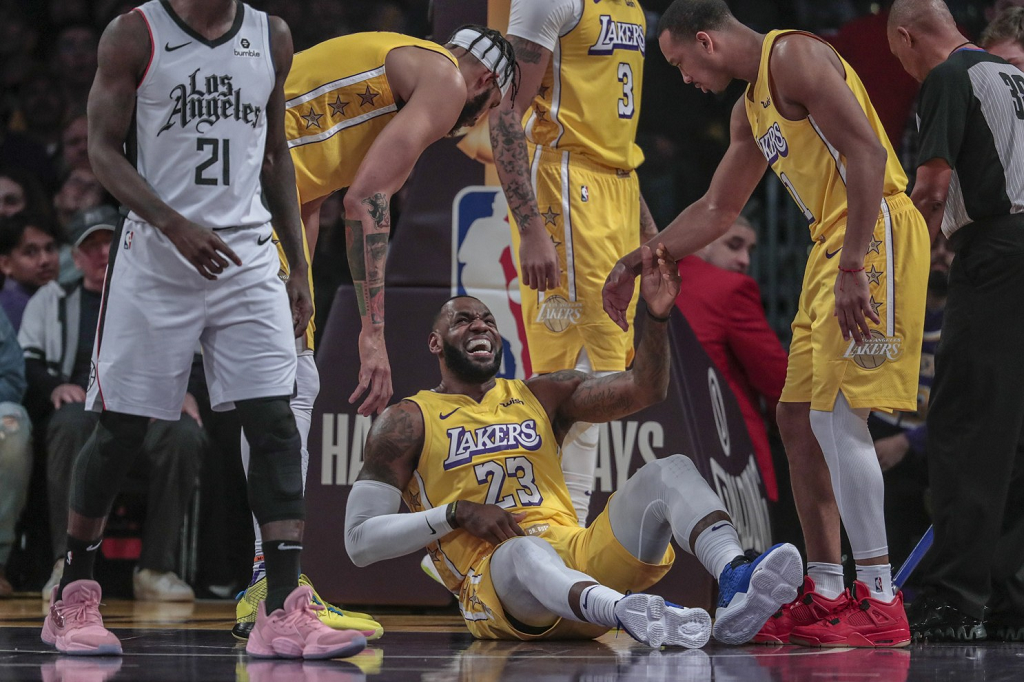 Los Angeles Lakers superstar LeBron James, who has more or less been injury free for his career (aside from some trouble with his groin), has tweaked his ankle twice this season and he has been listed as questionable for Monday’s game against the Portland Trail Blazers coming off an exciting win against the Houston Rockets. After tweaking his ankle against the Dallas Mavericks, LeBron James did play in the Lakers’ blowout win over the Minnesota Timberwolves, scoring 18 points with 9 boards and 5 assists in 26 minutes. It makes sense for the Lakers to preserve and protect their best player for the playoffs. For the defending champions, the ultimate goal is winning the title and a few regular season setbacks won’t really hurt them in the long run. Joining LeBron James on the “questionable” list is Lakers guard Alex Caruso.

Aside from LeBron James, Lakers superstar Anthony Davis has also been bitten by the injury bug and he missed Sunday’s game because of a calf strain. He was mainly held out because Lakers have back to back games and he is expected to play against the Portland Trailblazers. However, the Lakers will probably not rush Davis back on the floor. The playoffs is where the Lakers need their superstars at 100%. Defending the title won’t be easy with one (or both) of their superstars banged up. The LeBron James and Anthony Davis injuries also mean that the focus will now shift to the Lakers role players, including free agent acquisitions in Dennis Schroder and Montrezl Harrell, as well as the recently extended Kyle Kuzma. Will they be able to deliver without their superstars on the floor, only time will tell. The battle will definitely be an uphill one against a talented Portland Trailblazers squad with Damian Lillard and CJ McCollum.

What did LeBron James say after injuring his ankle on Opening Day?

LeBron James continued to stay confident about his injury after tweaking his ankle in the season opening loss to the Los Angeles Clippers. The NBA iron man, who has hardly missed any significant time due to injuries, believes that he will be able to bounce back with ease. In a strange turn of events because of the COVID-19 pandemic, the new NBA season started just 72 days after LeBron James and the Los Angeles Lakers won the 2019-2020 NBA championship in the COVID bubble in Orlando, Florida. On Opening night, the Lakers squared off against the Clippers. Before the game started, the Lakers were awarded their Championship rings. However, the evening didn’t end very well for the Lakers as they lost 109-116 to the Clippers.

LeBron James scored 22 points from only 28 minutes after turning his ankle in the second half of the contest.

Prior to the Christmas Day matchup against Luka Doncic and the Dallas Mavericks, LeBron James said: “I turned it pretty good but I don’t think it’s going to stop me from playing Friday.

“I have a couple of days, you know what I’m like about treatment, I do that around the clock. I think I should be fine.”

The 35 year old, who is still considered to be the best player in the NBA, added: “I’ll go home and have dinner right now, I’ll ice it and I’ll drink some wine that will flow straight to the ankle.

“I’ll make sure I drink on the left side of my body so it goes down to my left leg right down to my ankle!”

As the 2019-2020 season was delayed because of COVID-19, the 2020-2021 season was shortened to 72 games and started just 72 days after the Lakers beat the Miami Heat 4-2 in the Finals. For James, it was tough to comprehend returning to the court so soon after a gruelling end to the championship run.

“The day is over with, I’m very happy with what we were able to accomplish and I’m excited to move on to the next day. It felt weird even having a basketball game today,” he added.

“There was so much uncertainty of when we’re going to start the season, is it going to be December? Early December? Christmas? January?

“Then boom, December 1 training camp, first game of the season is happening on December 22. It was just a lot, I can’t lie to you it was just too much to grasp. We’re here now, happy today is over, but it’s just a lot to process.”

LeBron James’ superstar teammate Anthony Davis also shared LeBron James’ sentiments regarding the start of the 2020-2021 season. He said that it was physically and mentally excruciating to play so soon after the previous season’s end.

“I think it’s both, physically just from a standpoint of trying to get your body ready for the season,” Davis said.

“After the game, me and Bron were like, ‘I can’t believe we just played a basketball game’.

“The mental part, mentally being here, with a short offseason, just one or two months ago, then you had to wrap your head around we had to play tonight and play again Friday. It can get to some guys but the good thing is we have a very good team.”