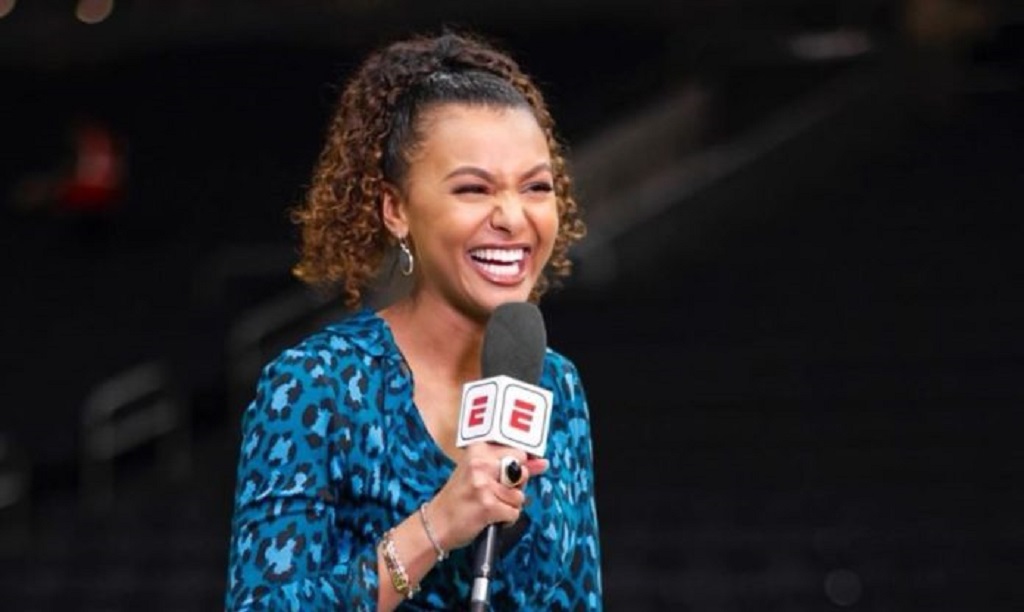 At just 25 years old, Malika Andrews is a lead reporter for ESPN in the NBA’s Orlando bubble and has been on national TV nearly every day for almost three straight months.

Malika Andrews: Interesting Facts That No One Saw Coming

She had a tough childhood:

A native of Oakland, California, Andrews was born on January 27, 1995. Everything, though, isn’t always as it appears.

As a middle-schooler, Malika Andrews was, in her words, “angry, depressed and anxious.”

She spoke to one publication explaining that although she may have appeared unbothered, she felt unseen and it manifested itself in different forms.

She fought with her parents. She flunked out of middle school. And she suffered from an eating disorder.

“It is not like x+y=z,” said Andrews, trying to answer how the problems developed. “It was just a feeling that something was not right. I can’t explain it.”

Her dad, Mike (a personal trainer), and her mom, Caren (an art teacher), were supportive and loving through this confusing time. Living in Oakland, they all bonded over the Golden State Warriors and enjoyed family dinners nearly every night.

Malika was athletic growing up as she skied, rode horses and rock climbed. Her younger sister, Kendra, idolized her.

She went to therapy at age 14:

By the time Malika was 14, the family said it was about survival, as her parents decided to send her to a year-round therapeutic boarding school in Utah. It pained her parents but it was what she needed.

“I can’t even describe how hard that was to get through,” Mike, her dad said.

Malika shunned her family and stopped studying. She was kicked out of Oakland’s Head-Royce School in 8th grade and the stress has led to an eating disorder.

Malika has always been determined, and that strength came when she admitted that she had a problem.

“I got to a point that I told my mother, ‘I think I need some help. I don’t think I’m going to be able to figure this out by myself.’” Malika said.

She found her way again and recommitted to her studies in Utah. She even graduated early at 17.

“Now, I look at it as one of the best things that could have happened to me,” Malika said.

She took up journalism to avoid a desk job and maths:

A 17-year-old Malika Andrews didn’t want to immediately go to college. She returned home to Oakland and worked at her zayde’s (yiddish for grandfather) civil rights law firm till she turned 18.

The 9-to-5:30 grind of a desk job convinced her she wanted to have more freedom like her parents. Their passions were their work and vice versa.

Malika went to the University of Portland, but did not know exactly what she wanted to be. She chose to study communications to avoid math.

From there, she made friends who happened to be on the school newspaper (and didn’t know that she would go on to become editor-in-chief of The Beacon, the university’s student newspaper).

The only available spot on the paper was the sports category.

Her sister, Kendra, was already fascinated by the idea that she could be paid to write about athletes but this didn’t come about out of the blue.  Malika definitely earned her place as she brought about meaningful changes penning down her thoughts that forced the school to add padding around the soccer field walls for safety. She was amazed her words could make a difference.

She won a scholarship with the added value of being able to learn from reporters, like Marc Spears and Sherrod Blakely. She trained with the Sports Journalism Institute, which encourages the development of young journalists to diversify newsrooms.

She graduated with honors in 2017. While at the University of Portland, she earned a bachelor of arts degree.

Back in Oakland, her parents and grandparents have ESPN on nightly, which is not unusual as they have watched Mike Breen, Mark Jackson and Jeff Van Gundy forever.

The trio began calling the NBA Finals when Malika was having her Bat Mitzvah at age 13 and now at age 25, Malika is their colleague.

“I still can’t believe this is happening,” her dad stated to one publication.

Family plays a huge role in fact, her sister who idolized her, is on the same career path. Kendra Andrews, 23, is the Nuggets beat writer for The Athletic. She too is wetting her feet in reporting on TV but she always can count on her sister as a career mentor, helping with angles and offering advice.

“I’m not perfect now,” Malika said. “I don’t think it is something you are ever ‘recovered’ from. It is something I have to actively work on every day.”

Her mother thinks her work helps Malika. She is already known in the business for being serious and focused.

She received awards from the Society of Professional Journalists, the National Association of Black Journalists, and the Columbia Scholastic Press Association for her work. In 2016, Malika Andrews won the Best Writer Award among fellow Oregon college students. Andrews also sits on the NABJ Sports Task Force Scholarship Committee.

After the Milwaukee Bucks lost to the Toronto Raptors in the 2019 Eastern Conference Finals, Giannis Antetokounmpo walked out of the press conference, upset about the article that Andrews wrote saying he would leave Milwaukee if the Bucks did not make enough improvement to win the title before he’s a free agent in 2021.

She didn’t plan on becoming one of the reporters covering the NBA from the Bubble:

25-year-old ESPN reporter Malika Andrews, has popped out of quarantine and joined the NBA Bubble making her the first reporter to make the trip to Orlando for the league’s restart at Walt Disney World’s Wide World of Sports complex, before any players or teams arrived.

It wasn’t just a massive personal commitment to spend the entirety of the NBA’s restart in the Bubble, but a professional one, too. With the limited available spots for media in the “green zone” of the NBA campus, where reporters can actually interact with the players, those that get those spots have to be able to expand their roles. For some, this has meant expanding their coverage to include more teams than are customarily on their beat, but for Andrews, it’s meant becoming a TV sideline reporter in addition to her typical written coverage of the league.

It’s a step in her career that she was, initially, supposed to ease into by dipping her toe in the relatively calm, tepid television waters of NBA Summer League in Las Vegas this summer. Those games would’ve provided a lower stress environment to learn the role and grow more accustomed with being on television, as she came to ESPN from a newspaper background with no significant on-camera experience. However, as was the case for millions around the country, the COVID-19 pandemic changed plans, and suddenly her first taste of sideline reporting would be in the NBA’s seeding round and just two weeks into the gig, her first playoff assignment — which now extends to a spot on ESPN’s Game 1 broadcast for the Eastern Conference Finals.

Andrews maintains her role as a writer and reporter for ESPN.com, in addition to doing TV and radio hits from on-site as one of the few who is in contact with players. It’s quite the workload, but something Andrews has embraced in such a unique environment, because ESPN would typically have more than a hundred writers, reporters, editors, and broadcasters on the ground in the NBA Playoffs, but in the Bubble green zone, that number is under 10 meaning everyone has to wear a number of hats.

One thing is for sure- for all of the hats she’s had to wear in Orlando, they’ve helped to reinforce and refine her skills across the board.