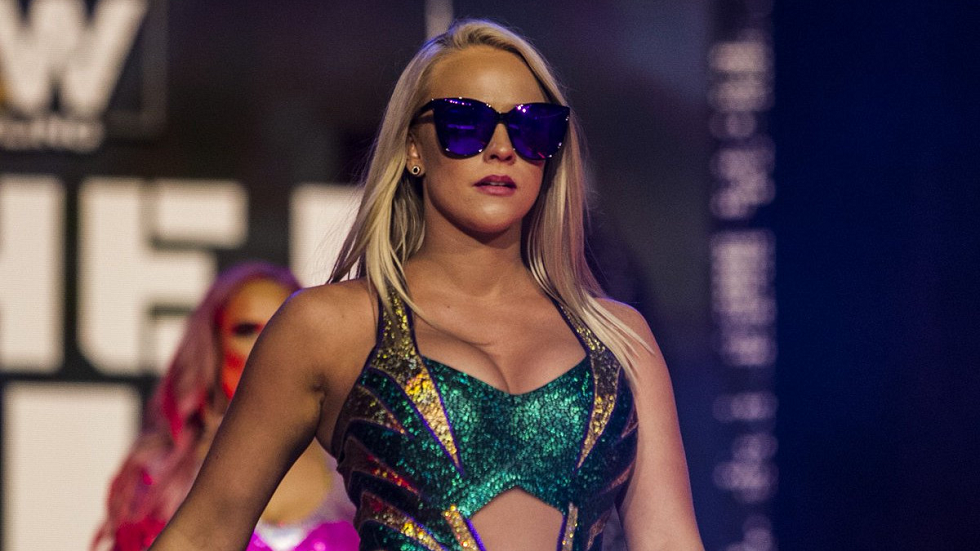 Penelope Ford (born September 14, 1992) came into this world as Olivia Hasler and will leave the earth with an indelible mark on All Elite Wrestling (where she is signed to). She is also known for her work in Combat Zone Wrestling. The American professional wrestler is a talented athlete, though she still is in the process of breaking the ceiling to become an outstanding sportswoman. To let you know who Penelope is, we present you with these ten facts you probably didn’t know about her. First of, we present you with her real name: Olivia Hasler!

Penelope Ford: 10 Impressive Things About The “All Elite”

Penelope was born Olivia Hasler, on September 14th, 1992, making her 27 years old. According to Pro-wrestling fandom, the American female fighter grew up in Phoenix, Arizona. She currently resides in Philadelphia, Pennsylvania. There is no much information on her family, including her parents and her siblings.

Pro-wrestling is a competitive sport even if there are scripts to guide the storylines and character development, but as a female wrestler, any kind of toned athletic body works to the advantage of the wrestlers. Penelope’s billed stats according to her Wikipedia page, are a height of 5 ft 4 in or 1.63 meters. While there have been issues from this sport’s fan base concerning billed stats, for Ford, it seems to be real, more so if you have seen her live in action.

3. Gymnastics and Cheerleading was her first passion:

Before she got into the squared ring, this sportswoman was already used to a strict exercising regime and also a large audience. Why? Well, Olivia Hasler (now famous as Penelope) was both a cheerleader and a gymnast, a skill you can notice from the moves she pulls against her opponents.

Penelope Ford loved wrestling and first started training at the Combat Zone Wrestling Academy, based in Voorhees in New Jersey. She then made her wrestling debut for Combat Zone Wrestling in 2014. It was the December 17th Dojo Wars episode, in a tag team match putting her and her partner, George Gatton, against Frankie Prichard and Conor Claxton. She won the match. Two weeks later, Olivia Hasler (now famous as Penelope) won her first singles event in the promotion when she took on Dave McCall.

The next year, Penelope Ford took part in several tag team matches where she picked up decent wins against her opponents. Joining CZW was a good move for the pro wrestler as it is one of the best independent wrestling promotions in the United States.

For the most part of her 5-year career, Olivia Hasler (now famous as Penelope Ford) has taken part in several tag team matches (including a couple of intergender competitions).

Always delivering her best and her tag team prowess, she led her team to several wins earning several championships that we shall see later on in this article.

In wrestling and all sports under the combat tag, gaining a title indirectly means that you are the best in your respective class. During her career, Penelope has earned some championships- so need we say more?

Her championships include the tag team victory, which she won from two promotions, Queens of Combat and Women Superstars Uncensored. In both victories, she partnered with Maria Manic.

The female pro-wrestler is also a one-time SAW Women’s champion for Pro Wrestling After Dark.

At 27, Penelope Ford is still young in the industry, and she can take more titles with time.

They severed ties multiple times during the four years, and at one time, they split for eight months, according to TWM. They joined AEW almost at the same time, though they have not graced the ring as a romantic duo again.

She is now romantically linked with Kip Sabian, whom she accompanies to the ring during his wrestling bouts on AEW. According to his Instagram bio Kip Sabian is a:

While that maybe his self-proclaimed title, here is what Kip Sabian’s wikipedia says:

Simon James Kippen (born 19 May 1992), better known by the ring name Kip Sabian, is an English professional wrestler. He is currently signed to All Elite Wrestling (AEW).

In February 2019, Sabian signed with All Elite Wrestling. Sabian made his AEW debut at Double or Nothing where he defeated Sammy Guevara in AEW’s first ever singles match.

In late December, Sabian established himself as a heel after calling out members of The Elite where he would face Kenny Omega on 10 December on Dark and Cody on 30 January, losing both matches. Sabian would also start to be managed by his real-life girlfriend Penelope Ford as he began feuding with Joey Janela leading up to 19 February, when he defeated Janela.

All Elite Wrestling aka AEW was the talk of the pro-wrestling scene when it came by in early 2019. For the first time, World Wrestling Entertainment had a worthy competitor.

The new promotion took on several talents from the independent scene, and Penelope Ford was one of the first to grace the scene.

AEW announced the news of her signing on January 8th, 2019, alongside her former partner Joey Janela. She is a core member of the All Elite women’s roster. Pretty soon, she started managing and dating Kip Sabian, who started battles with his girlfriends ex-boyfriend: Joey Janela

Aside from being an athlete, she is also an entertainer, so social media is a must-have tool for anyone in the entertainment scene. It is a good front for keeping in touch with fans and interacting with them. Ford is active on Twitter and Instagram, where she has 1278 and 109k followers, respectively.

Instagram seems to be her most favorite platform, where she has 1362 posts at the moment. She mostly posts photos in her wrestling gear or at wrestling events. In some of them, she is together with her boyfriend, Kip Sabian. Infact, her latest Instagram post is a black and white photo of Penelope Ford and Kip Sabian in an embrace with the caption: “I can’t wait to marry you. 💕”

As a wrestler, you need to have several moves to keep the sequence exciting to the audience. The most awaited move is the finisher, whose execution seems devastating and, most of the time, results in a win. Penelope Ford utilizes the stunner as her finisher. Several wrestlers use this move made popular by Stone Cold Steve Austin. Other wrestlers who add it to their performance include Kevin Owens and Ember Moon, who uses a version that requires diving!