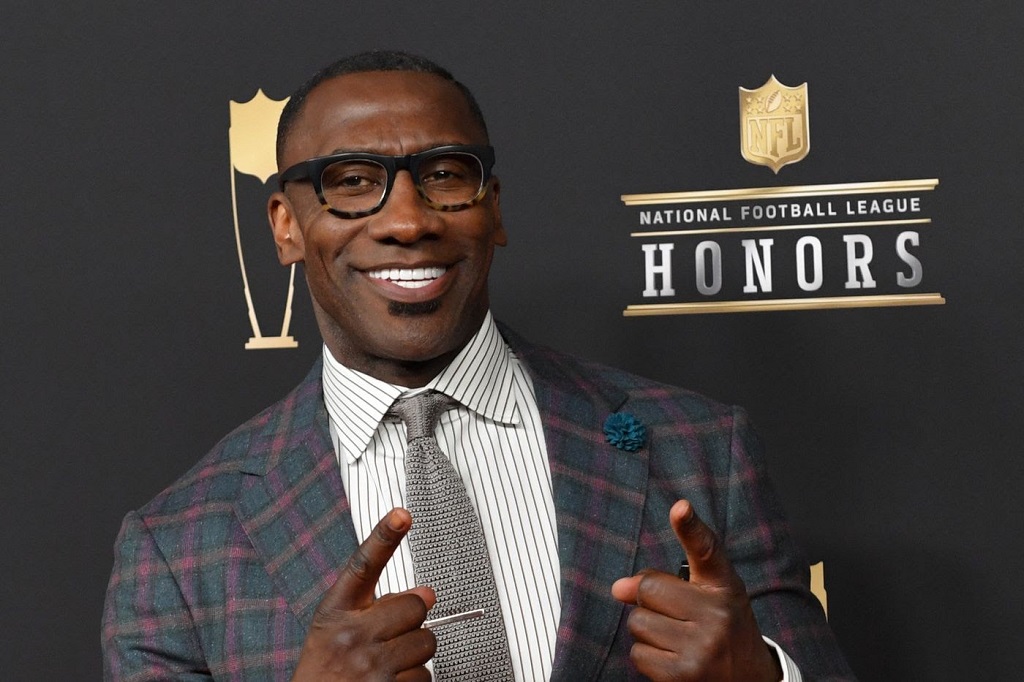 Shannon Sharpe is a former football player who played the tight end position for the Baltimore Ravens and Denver Broncos. After his illustrious career in the National Football League (NFL) where he won three Super Bowls (two with the Broncos and one with the Ravens), Shannon Sharpe made a successful transition into the field of sports broadcasting. His outspoken personality translated very well from the football field to the TV studio and he has become very popular as a sports analyst as well. For his stellar play on the football field, Shannon Sharpe was inducted into the Pro Football Hall of Fame on August 6th, 2011 in his third year of eligibility. As a sports analyst, Shannon Sharpe used to work for CBS Sports’ NFL telecasts. Since then, he has worked alongside veteran sports analyst Skip Bayless for the Fox Sports 1 superhit show Undisputed with Skip and Shannon. The show was initially moderated by Joy Taylor who went on to take up the role of news anchor on The Herd with Colin Cowherd. Currently, the show is moderated by popular college football sideline reporter Jenny Taft. The show’s theme song was produced by famous rapper Lil’ Wayne who appears frequently on the show. It’s one of the most popular sports analysis shows on television and on the internet. The Undisputed podcast also has a lot of listeners. Shannon Sharpe is very famous for his larger than life on screen personality and his amazing sense of humour. After an illustrious career as one of the greatest tight ends of all time, Shannon Sharpe has become one of the most beloved sports analysts today. Let’s find out more about him.

Shannon Sharpe: All You Need to Know

When was Shannon Sharpe born?

Where did Shannon Sharpe go to college?

He wasn’t heavily recruited out of high school and went to a non football powerhouse in Savannah State. One of the biggest reasons he couldn’t play for a Division I school was the fact that he didn’t have good grades. Sharpe said that his grandmother sent him to Savannah State for two reasons, to get a degree, and play in the National Football League. Shannon Sharpe said that he was going to do both and he didn’t care which one happened first. One of the biggest driving forces for Shannon Sharpe’s career was a desire to give his grandmother a better life. Shannon Sharpe played football and basketball, and also competed in track and field. In track, he competed in jumping and throwing events. He had personal-bests of 6.73 meters in the long jump and 14.73 meters in the triple jump. He also got a top throw of 42.06 meters in the discus throw.

Shannon Sharpe went on to earn three-time All-Southern Intercollegiate Athletic Conference selections from 1987 to 1989 and the SIAC Player of the Year in 1987. Shannon Sharpe also went on to be named the Kodak Division II All-American in 1989. He led the Tigers’ football team to their best records in the program’s history: 7-3 in 1988 and 8-1 in 1989. As a senior, Sharpe caught 61 passes for 1,312 yards and 18 touchdowns, including three games with more than 200 yards. Sharpe finished his college career with 192 receptions for 3,744 yards and 40 touchdowns. He was inducted into the Division II Football Hall of Fame in 2009 and Savannah State’s athletic Hall of Fame in 2010.

Why was Shannon Sharpe drafted so low?

Even though Shannon Sharpe had a solid college career, he wasn’t considered a very bright prospect going into the 1990 NFL Draft. Shannon Sharpe only played Division II college football and at 6’2”, 230 pounds, he was considered too bulky for a wide receiver and too small for a tight end. He was eventually selected in the 7th round with the 192nd pick by the Denver Broncos.

After two mediocre seasons as a receiver in which he caught just 29 passes, Denver converted him to a tight end. This quickly paid off, as Sharpe caught 53 passes in his third season. He has been hailed as the first tight end who played like a wide receiver. He remained with Denver until 1999, winning two championship rings at Super Bowl XXXII and Super Bowl XXXIII in the process. After the 1997 season championship – his first – he appeared on General Mills’ Wheaties boxes with four other Broncos. During a game against the conference rivals, New England Patriots, he famously pretended to call the President on the sideline and asked him to send the National Guard since the Broncos were “killing the Patriots”.

Shannon Sharpe went on to play for the Baltimore Ravens for two seasons and won another Super Bowl. He was teammates with the legendary Ray Lewis who won the MVP award for the 34-7 victory over the New York Giants.

After a two-year stint with the Baltimore Ravens, Shannon Sharpe returned to the Broncos. He played there until 2003. From there, he retired to become an NFL analyst for CBS.

Ozzie Newsome, the Ravens’ general manager and a great tight end himself, said of Sharpe during his career: “I think he’s a threat when he’s on the field. He has to be double-teamed. He’s a great route-runner. He’s proven that he can make the big plays. That’s what separates him. He’s a threat.” Sharpe was selected to the All-Pro Team four times, played in eight Pro Bowls (1992–1998, 2001) and amassed over 1,000 receiving yards in three different seasons. In a 1993 playoff game against the Los Angeles Raiders, Sharpe tied a postseason record with 13 receptions for 156 yards and a touchdown. In the Ravens’ 2000 AFC title game against the Oakland Raiders, he caught a short pass on third down and 18 from his own four-yard line and took it 96 yards for a touchdown, the only touchdown the Ravens scored, en route to a 16–3 Ravens’ win. Sharpe also caught a 50+ yard pass in each of their other two playoff games. He finished his 14-year career with 815 receptions for 10,060 yards and 62 touchdowns in 203 games. Shannon Sharpe also keeps having hilarious interchanges with another great tight end Tony Gonzalez on the sets of Undisputed. The two keep making jibes at each other and argue who a better tight end is.

When was Shannon Sharpe inducted into the Pro Football Hall of Fame?

Sharpe was among the 17 finalists being considered for enshrinement at the Pro Football Hall of Fame in 2009. However, he was passed over in his first year in a class that included Bruce Smith, Ralph Wilson, Derrick Thomas and Rod Woodson. On October 23, 2009, the NCAA Division II Football Hall of Fame announced that Sharpe would be inducted in December of that year. In addition, Savannah State University also retired Sharpe’s No. 2 jersey.

What controversy was Shannon Sharpe involved in?

A woman claiming to be Sharpe’s girlfriend, Michelle Bundy, filed for a restraining order against him on September 9, 2010, in an Atlanta court. Bundy accused Sharpe of sexual assault and threatening her life; according to legal documents obtained by SportsByBrooks, Bundy claimed she was forced to have sex with Sharpe and that Sharpe called and threatened her life, placed her under surveillance and would call to say he was watching her. The restraining order was dismissed the following week, with Bundy accused of fabricating her claims against Sharpe.

Sharpe was a commentator for the CBS Sports pregame show The NFL Today, including the Sprint Halftime Report and the Subway Postgame Show, replacing Deion Sanders and co-hosting with James Brown (formerly with Fox NFL Sunday), former NFL quarterbacks Dan Marino and Boomer Esiason, as well as former coach Bill Cowher. In the 2004 NFL regular season, Sharpe defeated Marino and Esiason in the pick ’em game of The NFL Today with a 53-21 record. As per Shannon Sharpe’s critics, his poor grammar and word enunciation severely hurt his broadcasting skills. Talking about Shannon Sharpe, the satirical magazine The Onion published an article called “CBS Producers Ask Shannon Sharpe To Use at Least 3 Real Words Per Sentence.” On February 18, 2014, it was announced that Sharpe, along with Dan Marino were being relieved of their duties as on-air commentators on The NFL Today and were being replaced by Tony Gonzalez and Bart Scott.

Shannon Sharpe, whose diet and fitness regimen is legendary, was hired as a columnist and spokesperson for FitnessRX For Men magazine. He also appeared on the magazine’s September 2013 cover. During the COVID-19 pandemic of 2020, Shannon Sharpe also released his home workout video.

After his retirement, and especially since he started appearing on Undisputed, Shannon Sharpe has become very popular on social media. He is an outspoken supporter of LeBron James and considers him to be the greatest NBA player of all time. Shannon Sharpe calls LeBron James, GOAT (Greatest of All Time) James and appears on the show with a goat mask whenever LeBron James has a great game.

Shannon Sharpe also appeared on the hit TV show American Dad as himself in the episode “The Scarlett Getter”:

Shannon Sharpe recently launched his own podcast called Club Shay Shay and his first guest on the show was his brother Sterling Sharpe:

Shannon Sharpe has had a great football career, one which culminated in the Pro Football Hall of Fame. But ever since he started appearing on Undisputed along with Skip Bayless, he has risen in popularity meteorically. He wowed fans all over the world with his incredible play on the field and he now wows fans with hilarious antics on TV. Here’s a compilation of some of the most hilarious moments of Shannon Sharpe on television, enjoy.