Shocking LiAngelo Ball Facts You Never Knew To Be True! 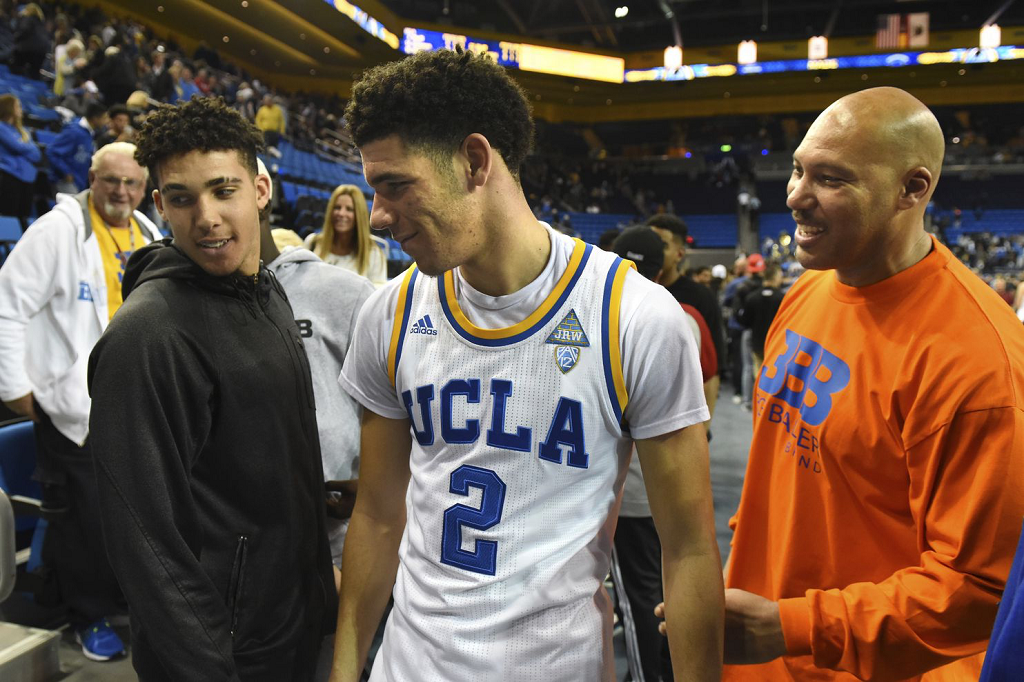 Many fans who watch the NBA have become accustomed to seeing brothers in the league. There’s Steph and Seth Curry, Brook and Robin Lopez, and Giannis, Thanasis and Kostas Antetokounmpo. Now, as predicted by their infamous father LaVar Ball, the Ball brothers are gaining more fame in the NBA. One of them is LiAngelo Ball and here are some interesting things to read about the player:

LiAngelo ‘Gelo’ Ball is what his fans call him but his full name is LiAngelo Robert Ball:

The American basketball player is known for the Oklahoma City Blue of the NBA G League. He played for Chino Hills High School in California, where he won a state championship and achieved national success as a junior with his brothers Lonzo, now an NBA guard, and LaMelo, a top NBA prospect.

He comes from a family where the genes are in the basket:

Ball is the second son of LaVar and Tina Ball, who are both former college basketball players. LaVar, who stands 6-foot-6 (1.98 m), played for Washington State and Cal State Los Angeles. Tina, who stands 6-feet (1.83 m), also played with the latter school.

LaVar later played professional football as a tight end for the London Monarchs of the World League of American Football after being loaned from the New York Jets. In 2017, LaVar became a well-known but polarizing sports media personality, primarily for making outlandish remarks about the careers of himself and his sons.

Ball’s older brother, Lonzo, is a point guard in the NBA and was the second-overall pick in the 2017 draft, while his other brother, LaMelo is considered one of the top prospects in the 2020 draft.

A three-star recruit and UCLA signee, LiAngelo decided to forgo college basketball after being suspended for shoplifting in China:

In 2016 UCLA made a deal with the Ball family that all three brothers after graduation would go on to play for their Division 1 NCAA basketball team. In June 2017 Gelo duly enrolled at UCLA and began training with the team.

But while on a preseason tour with the team in China he was caught shoplifting with two of his teammates. On November 7, 2017, days before UCLA’s regular season opener against Georgia Tech in Shanghai, China, Ball and two other freshman teammates were arrested in Hangzhou for allegedly stealing sunglasses from a Louis Vuitton store at a high-end shopping center near their team hotel.

The trio potentially faced a fine and three to ten years in prison but was soon released from custody.

Ball was suspended indefinitely from the UCLA basketball program. On December 4, he announced that he planned to withdraw from UCLA; his father LaVar had grown frustrated over the length of the suspension.

“I’m not sitting back and waiting,” LaVar Ball told ESPN. “He wasn’t punished this bad in China.”

“We get back over here, and the consequences were even stiffer than China. So basically they’re in jail here.”

Had Ball stayed at UCLA, he would have remained suspended for the rest of the season. So Ball decided to sign with Lithuanian professional team Prienai. He later played in the Junior Basketball Association (JBA), a league founded by his father, before joining the G League at the end of 2019–20.

Ball and his brothers have stirred national attention since playing together in high school:

In his childhood, Ball often played basketball against older opponents, facing teams of fourth and fifth-graders while in kindergarten.

He started working out and training by age four and first competed with both of his brothers, Lonzo and LaMelo, at age six. As a seven-year-old, he also began playing flag football with his brothers. While Lonzo was a quarterback, LiAngelo and LaMelo caught passes. On the basketball court, LiAngelo grew up playing with his brothers on Big Ballers VXT, an Amateur Athletic Union (AAU) under-17 team created by their father and coached by both parents.

Have you seen his family’s Facebook Watch reality show Ball in the Family?

LiAngelo Ball in particular was one of the best and most prolific three-point shooters of his class, earning him over 30-plus points a game and an All American First Team honourable mention in his final year of school.

It was also during this time that LaVar Ball, the player’s father, founded the basketball clothing and apparel brand ‘Big Baller Brand’ and agreed to star in a Facebook Watch reality show called Ball in the Family.

The first season was met with a generally positive reception from critics.

Myron Medcalf of ESPN compared the show favorably to other Bunim/Murray production Keeping Up with the Kardashians saying that “unlike the Kardashians, who never really care about authenticity, Ball in the Family tries to be sympathetic to the Ball patriarch while showing his brashness isn’t just there to generate social media buzz.”

The NBA is noticing his talent:

When he was injured in 2019 he missed out on the NBA Summer League, and when asked about the topic he stated: “They said three teams are looking for me for Summer League. Stuff is starting to fall into place, and it feels good”.

This indicates that NBA organisations are noticing his talent and, by the sounds of it, there’s a high chance he will appear in the upcoming NBA Summer League.

Although LiAngelo Ball’s future playing in the NBA looks uncertain, there’s a chance that all three Ball brothers will appear in the next NBA Summer League. LiAngelo Ball is a top-quality player in his own right, but it’s hard to stick out when your brothers are both at an NBA standard of play, skill and overall basketball IQ.

Nonetheless, LiAngelo Ball has a shot to prove his talent on his biggest stage yet as he takes part in the final month of the G League season. If he’s right about himself, it could lead to a much bigger role moving forward.