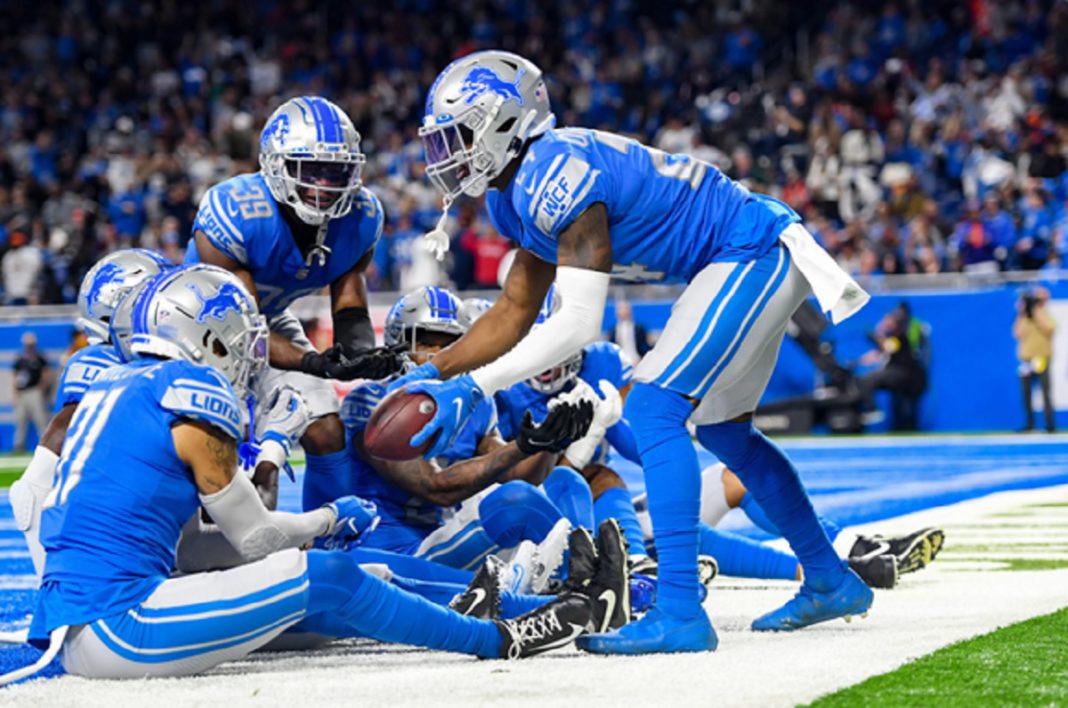 The Detroit Lions have become one of the NFL’s team’s most loveable teams over the offseason and, now, there’s even talk of them possibly winning the NFC North next term.

With the 2022 NFL schedule being released, the Lions have a roadmap for their campaign and, in terms of last year’s winning percentage as it pertains to opponents, have the fifth-easiest schedule, with the four NFC East teams the only ones who rank below on that front.

The Bill Simmons podcast recently discussed the Lions’ prospects of usurping the Green Bay Packers as NFC North leaders next term and some valid points were made.

Detroit will play all four of the NFC East teams in 2022 and, given the promising schedule, pretty much everyone is optimistic over their chances. Gambling in Michigan will certainly edge towards the Lions’ chances, and with good reason.

Analyst Warren Sharp suggested the Lions could be in contention to win the NFC North at the end of next season.

“I think one team that’s interesting, although this would be a major longshot and basically you’re needing something to fall apart with the (Green Bay) Packers’ early schedule here, and that could potentially be the Detroit Lions coming out of nowhere,” Sharp said on the aforementioned podcast (H/T Fresnobee.com)

Sharp is the owner of Sharp Football and has built a metric named “Rest Edge,” which measures the advantage teams have over others based on the rest they get. The Lions will have 11 more rest days than their opponents next season. Only the Buffalo Bills have more, with 12.

The Lions have a lot more going for them than the favorable metric results, though.

“We know that I really like their rest advantage, they also have the fifth-easiest schedule based upon who they play this season,” Sharp added. “They’re a team, look, with the Lions you wanna swing big with these guys. Either you don’t want to back them or you want to back them to have a real turnaround season.”

The Lions finished 3-13-1 last season, the first year of Dan Campbell’s career as a head coach. While that doesn’t make for much confidence, there is a sense that things could be much better next term as there is said to be a culture developing within the organization.

One of the bigger concerns, though, is the team’s future at quarterback. Jared Goff appears to be who they’re going with as the starter at the position, although there are worries over how long he could continue to play at a high level. Sharp reckons Goff could have a much better 2022 given the offensive weapons added during the offseason.

“We know Jared Goff has major limitations from an upside perspective, but with reasonable enough coaching and just level play, his stats are fine,” he pointed out. “They added a lot of pieces around him and one of the most important things for a quarterback, especially one we don’t love, is a good offensive line, good protection, and that’s one of the things that they really have there.”

Simmons, the host, noted that the team’s addition of James Williams plus another season with Amon-Ra St. Brown as their wide receiver could see to improved performances from Goff. The QB’s play did get a lot better towards the end of last season.

“I thought the Goff numbers down the stretch were pretty intriguing,” Simmons said. “I’m not a giant Goff fan, but he has succeeded before. I mean, he had a lot of good weapons around him (in Los Angeles) and obviously Sean McVay couldn’t wait to get rid of him, but to me he’s at least more of a certainty than (New York Jets quarterback) Zach Wilson is.”

Goff completed the season with 19 touchdowns and eight interceptions and, after Campbell took over play-calling in Week 10, threw 11 against just two picks.

Sharp and Simmons both agreed that the Lions have a good chance to make the playoffs next term or even win the NFC North, with Sharp noting that the Packers have lost a huge part of their offense in Davante Adams.

NFL writer Peter King has also referred to the Lions as one of the most intriguing teams heading into next season.

“I’m higher on them than most,” he wrote. “Consider how hard they played in a disastrous rookie year of coach Dan Campbell, and how, despite winning only three games, they were 11-6 against the spread, indicative of a team outperforming expectations.”

He also observed that Goff has to play a lot better than he did in 2021. The signal-caller himself is confident the Lions can have a great 2022.

“There’s a lot of reasons for us to be very optimistic,” the QB told King earlier in May, “And I can tell you the guys in the locker room are feeling good about our chances.”