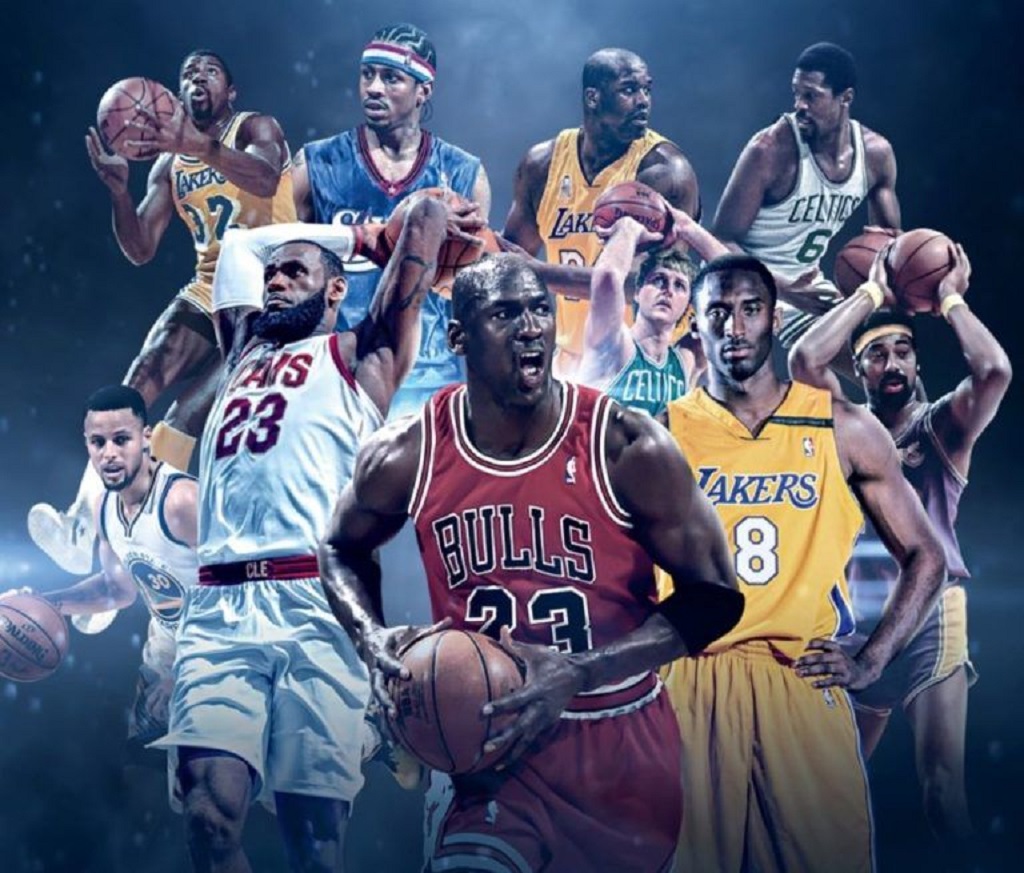 The eras are different and it definitely should reflect in rankings. We started tracking three-pointers in the 1979 season. Blocked shots were not recorded until the 1973-74 season. In 25-50 years, we might be looking at other various changes that make it tough to rank this current era of players. Let’s appreciate the players that have played the game over the last several decades. Let’s highlight their accomplishments and play. We can debate LeBron James vs. Michael Jordan until we are blue in the face, but there is no arguing they are two world-class basketball players. Also, James is better, so let’s dive in.

Michael Jordan is a ten-time scoring champ, six-time NBA champion, and we could go on-and-on about his accolades. The five MVPs is also something to note. Jordan goes down as one of the greatest of all-time, even though his fashion choices were highly questionable. We also have to remember his overall stats included taking a year off to play baseball, and then retiring for three years before coming back to average 20 points per game in two seasons with Washington.

Each era has that one player, and in this generation we have been blessed with a handful of world class players. LeBron James takes the cake, however. James is a three-time NBA Champion, and has been a Finals MVP three times as well. Many will want to talk about the finals record, but his production should overshadow it. James is now 5th in points all-time, and will not stop there. James is also heading into the top ten in assists, and is top 20 in steals. His all-around game makes him one of the best of all-time.

In over 1,000 games played, Wilt Chamberlain averaged some ridiculous numbers. He was a four-time MVP, two-time NBA champion, and a seven-time scoring champ. This is also one of those era conversations; in the early 60s, these guys were playing over 45 minutes per game. I mean, Chamberlain averaged 50.4 points per game when he was 25. He has established himself inside the top ten all-time in points, and it is going to be tough for anyone to knock him off the top of the leaderboard for rebounds at 23,924.

When we look back at Magic Johnson’s career, he averaged double-digit assists in nine of 13 seasons. He was also an efficient shooter, finishing with a FG% over 50%. Johnson was not your prototypical point guard at 6’9, but his passing ability was unmatched. Johnson was part of those magical Lakers teams in the 80s, winning five championships, and in three of them, he was a Finals MVP. He was an all-star in 12 of his 13 seasons, and All-NBA in ten of them.

Kareem Abdul-Jabbar is one of the best to do it. In his career, he was a six-time MVP and NBA champion and finished as a Finals MVP twice in his career. Kareem was induced in the Hall of Fame in 1995 and was an all-star 19 times. Kareem also brought a title to Milwaukee, which is their lone one in organizational history. Moving to Los Angeles is where we really remember his time, going down as one of the Lakers greats as well.

So many greats have come through Boston over the years, and Larry Bird is the more iconic one. He is a three-time NBA Champion and a two-time Finals MVP. He was a Rookie Of The Year over Magic Johnson, who battled each other as rivals throughout their careers. Bird looked like a midwestern suburban dad but averaged over 20 points in all but two seasons, where he averaged just 19. Bird was another Celtic to stay with Boston for his entire career.

Actor, rapper, basketball player, Shaquille O’Neal is one of the most dominant players of all-time. He was a first overall pick out of LSU, and after a few years in Orlando, he made his presence felt in Los Angeles. He was a 15-time all-star and four-time NBA Champion. Shaq also dominated finals with three MVP awards as well. While he fizzled out a little bit later in his career, but his time with Miami brought them a ring. You are likely including Shaq in all your center rankings in NBA history.

Kobe Bryant is currently third on the all-time scoring list, and 15th in steals. We saw peak Bryant in those 2005 and 2006 seasons, where he averaged over 30 points per game. Bryant is a two-time scoring champ and will go down as one of the greats in terms of playoff production. He is a five-time NBA Champion, and something that gets overlooked is the fact he was named to the All-Defensive team 12 times.

Tim Duncan’s game has played across almost three eras of basketball. Playing from the age of 21 to 39, all with San Antonio, he is someone we will likely not see again. Duncan is a five-time NBA Champion and would have had a few more if it wasn’t for Kobe Bryant and LeBron James. Duncan was also a two-time MVP and was named to the All-Defensive team 15 times. Being drafted number one overall back in 1997, Duncan was everything as advertised.

Bill Russell gets some flack, playing in the late 50s and early 60s. His scoring stats were pedestrian when you consider most on this list, but he was an excellent rebounder, averaging 22.5 per game. Russell was the cream of the crop at his time, leading the Celtics to 11 championships, and also tallied five MVP awards. Russell is a Celtic great, and the consistency over his career was something that bumps him up into these rankings.

One of the great assist men in the game was Oscar Robertson, but his 30 point per game seasons also established himself as a lethal scoring point guard. Robertson played his time with Cincinnati and Milwaukee, and was a part of that championship team with Milwaukee. Averaging 25 and 9 over 1,000 games in a career is going to put you up on this list. He was averaging near triple-doubles in his first five-six seasons in the league.

Hakeem Olajuwon was ferocious on both sides of the ball, and was a three-time block champion. He dominated his way to nine All-Defensive teams and was a two-time Defensive Player of the Year. Olajuwon managed to win two rings before his time was up, but probably should have had more. Both times he was the Finals MVP. Olajuwon played out his career with Houston until his last season, where he landed with Toronto.

We are going way back for Jerry West, who surprisingly won just one championship with the Lakers during his time in Los Angeles. He was a 14-time all-star and also was the scoring champion in the 1969-70 season. West was a volume shooter, and the career 47% field goal percentage says a lot. He played over ten seasons with the Lakers, and the only season he scored under 20 points per game was in his rookie season.

Moses Malone played 20 years professionally, and won the NBA Finals in the 1982-83 season. He was also Finals MVP. Malone is a three-time MVP and dominated the boards as a rebound champ six times. Malone had a lengthy career, although, in the last few seasons, you saw he was tanked physically. At age 26, Malone had a career-high 31.1 points per game. He also added defensively, averaging over one block per game.

Karl Malone will go down as one of the greatest athletes to never win a championship. He is a 14-time all-star and currently number two on the all-time scoring list. Malone is also 7th in overall rebounds and tenth in steals. The Mailman played almost his entire career in Utah, as his last season, he went ring chasing with the Lakers and fell short. Malone dominated year in and year out with the Jazz, but they could never get that title.

Julius Erving has a couple of titles, although two came playing during the ABA years. Erving is a 16-time all-star and a four-time MVP. He spent his entire NBA career with Philly, going down as possibly the greatest 76er of all-time. Averaging over 20 points per game in all but two seasons in the NBA is quite impressive, and shooting over 50% in his career adds to the dominance he had on the offensive side.

It is only a matter of time before we see Kevin Durant start to pass up some of the great scorers in the game. He is a four-time scoring champ and a two-time NBA champ. While we may look at him joining Golden State to get those rings as a cop-out, Durant is still one of the best of this era. He is a versatile scorer, currently averaging over 25 points per game in his career. Durant’s defensive ability is often overlooked as a lengthy defender who is tough to get around or shoot over.

Defensively we look at Kevin Garnett as one of the best, and his trash talking is also something that adds into this list. Garnett was a huge edge on both sides of the ball, and was named to the All-Defensive team 12 times. He won a championship with Boston after a long stretch with Minnesota. His 2003-04 season was an MVP one, and he set a career high in points per game and rebounds per game.

Elvin Hayes seems to fly under the radar in terms of one of the greats. He is 10th in all-time scoring, 4th in rebounds, and 24th in blocks. Hayes is was inducted in the Hall of Fame back in 1990, and was an NBA Champion in the 1977-98 season. Hayes was in the league still when blocks were not counted, so he had five seasons with no recorded blocks, and still sits within the top 25 of all-time.

Charles Barkley is another Hall of Fame power forward who didn’t win a ring, and had a couple of chances to do so. Barkley in his prime was a menace on the glass, and often averaged over 20 points per game. He was an MVP in the 1992-93 season, and an 11-time all-star. Barkley is mainly known for his time in Philly and Phoenix, but also still produced double-doubles during the end of his career in Houston.