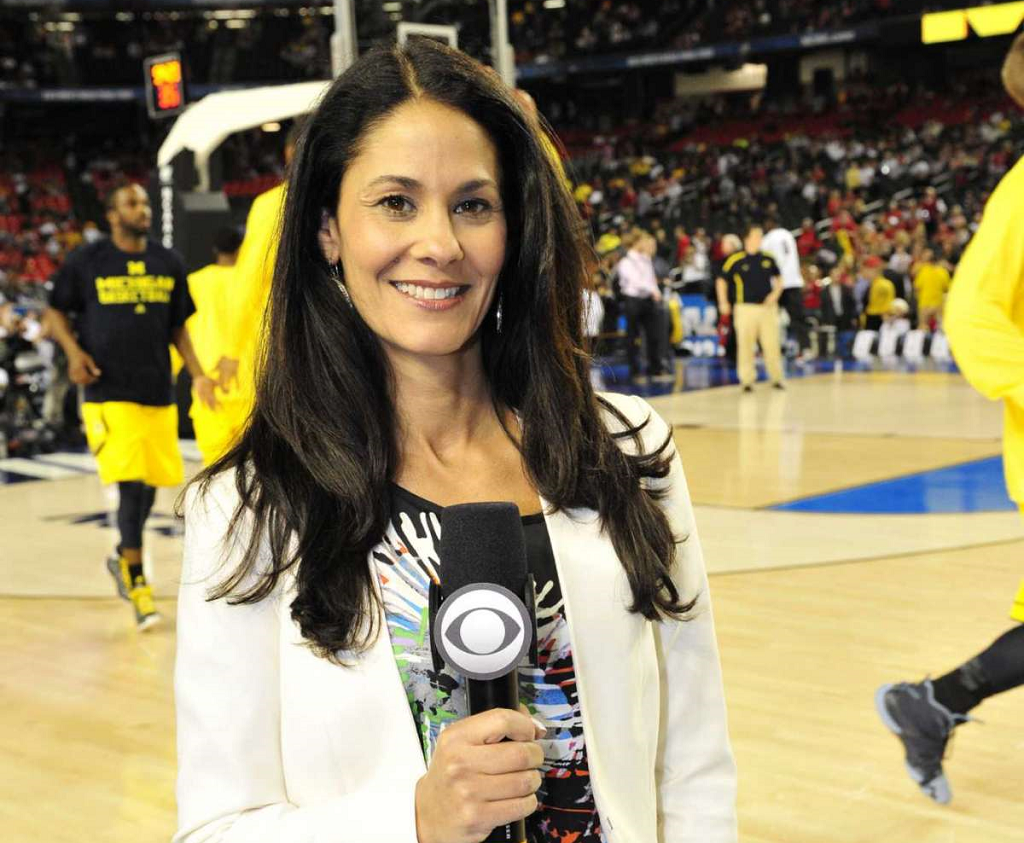 Four-time Emmy nominated sports broadcaster Tracy Wolfson is an American sports anchor associated with CBS Sports. This anchor is always on her toes with a trick up her sleeve even when she faces technical problems while covering live interviews after a big game. She married David Reichel when they tied the knot in 2002. Together, the couple has three boys namely Dylan (born 2001), Ari (2009), and Evan (2005). This year will be their 22nd anniversary!

The journalist was born on 17 March 1975 to middle-class parents, Jerome, a consultancy firm owner and Josephine Wolfson, an art teacher. Tracy Wolfson grew up in Congers, New York, and attended Clarkstown High School North, in the New York City suburb of Rockland County. She is an only child. She is a University of Michigan graduate with a degree in communications.

Tracy turned 45 recently. Her zodiac sign is Pisces. Her height has never stopped her from doing her job. She has taken several photos and posted a tweet that her height is 5 feet 2 inches (1.57 meters).

She is Jewish and a native of New York. The amazing journalist tries to celebrate all the Jewish events with her family, especially the Mitzvah.

She is currently in her 16th year with the Network and is their lead reporter for the NFL on CBS, which includes Sunday games, AFC Wildcard, Divisional and Championship, and she was part of the 2018, 2015 and 2013 Super Bowl.

Tracy was also the sideline reporter for the inaugural Thursday Night Football package. As a sideline reporter, Wolfson primarily interviews coaches at the end of each half quarter and also gives updates on player injuries.

Before that, Tracy was the lead sideline reporter for the SEC on CBS Football package and she was on the sidelines for Army-Navy and the Sun Bowl. In addition, she was an anchor on the CBS Sports desk as well as a reporter for college basketball, auto racing, skiing, ice skating, gymnastics, tennis, track and field and rodeo.

Tracy is also the lead reporter for CBS’ NCAA Men’s Basketball coverage including March Madness and the Final Four.

Tracy also has anchored the CBS Sports Desk and hosted “At the Half”.

She is currently one of the hosts of the groundbreaking all-female sports show “We Need to Talk” that airs on the CBS Sports Network.

While at CBS, Tracy has also served as a reporter for the network’s broadcasts of the 2004 and 2005 U.S. Open Tennis Championships and has covered Auto Racing, Skiing, Ice Skating, Gymnastics, Track and Field and Rodeo.

In addition to Tracy’s CBS responsibilities, she has also served as a reporter for Turner Sports for select NBA regular season games and the NBA Playoffs.

Prior to CBS, Tracy served as an anchor/reporter for the Madison Square Garden Network and worked for ESPN as Host/Reporter covering U.S. Open Golf, College Football and Arena Football (2002-03). She also appeared as a reporter for Long Island News Tonight (LI News Tonight), a local Long Island college-run news station. She later worked for MSG Network as an anchor and reporter as well as covering golf, college football and Arena Football for ESPN from 2002–2003.

Wolfson is the lead field/floor reporter for all live CBS Sports football and basketball broadcasts. She has been the CBS college football sideline reporter since 2004 and works with the lead on-air talent team in each of the sports she covers.

She has covered all the U.S. Opens and the NCAA Men’s Basketball Final Four since 2004. Wolfson did postseason sideline reporting for the NBA on TNT from the 2011-2016 NBA Playoffs and is a contributor to the NFL on CBS by filing reports on the Super Bowl and sideline reporting for preseason games with Greg Gumbel and Dan Dierdorf or Ian Eagle and Phil Simms, such as the Seahawks-Packers preseason game in 2013.

On May 22, 2014 it was announced that Wolfson would be joining Jim Nantz and Phil Simms as an NFL sideline reporter on Thursday night and some Sunday afternoon games starting in the 2014 season.

She was the floor reporter for the NCAA men’s basketball championship games in 2016 and 2017.

In 2005, she was asked to be a part of Mississippi State University’s College Sports Speaker series

The same year she was the spokeswoman and M.C. for Foundation for Diabetes Research events. In 2004 she was named one of the “Best New Faces” of the NCAA tournament in USA Today.

She resides in Tenafly, New Jersey with her husband, David Reichel, and their three sons.

Wolfson graduated with a degree in Communications from the University of Michigan where she crossed paths with her husband. Though they went to the same college, they started seeing each other after graduating.