Trendon Watford: The Young and Impactful Career of the LSU Star 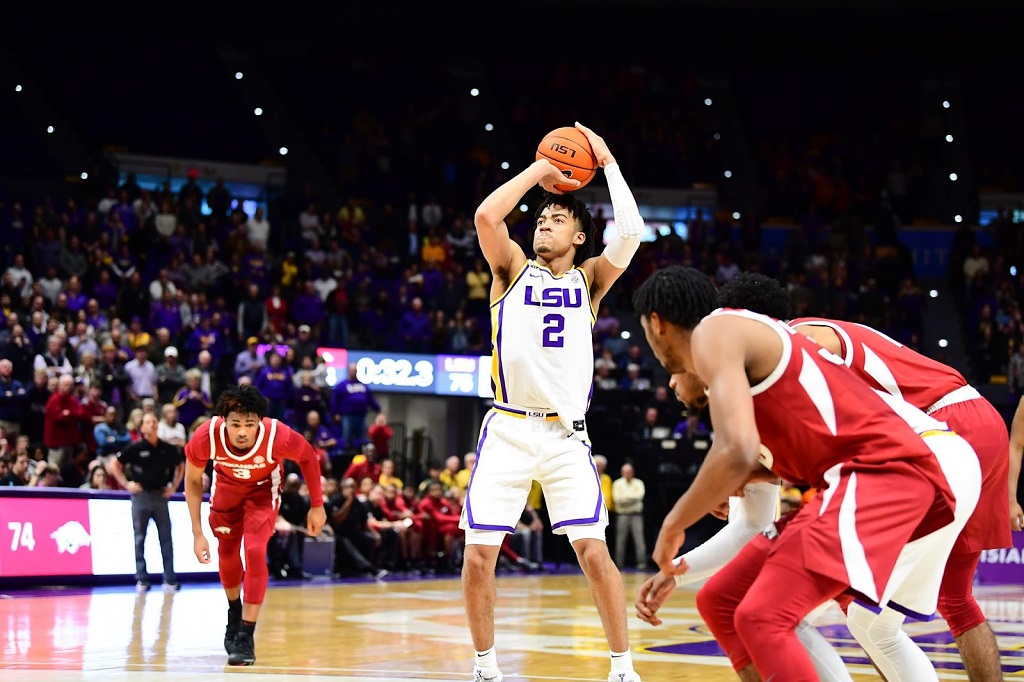 Trendon Watford is a college basketball player who plays for the Lousiana State University. The freshman was one of the prized recruits of the Tigers. Trendon Watford had a great freshman year for the tigers and he made the All-SEC Freshman team for 2020. Watford started 30 of 31 games, averaging 13.6 points, 7.2 rebounds and 1.7 assists per game. Watford played for an average of 31.5 minutes per game. He scored his season high 26 points against Vanderbilt. The six foot nine inches tall forward also had seven double doubles with 15 being his highest rebound total for a game. He gathered more than rebounds for a game on eight occasions. Watford shot an impressive 48.9 percent from the field and also made 18 three pointers in the process. He struggled from the free throw line though, only making 67 percent from the charity stripe. However, that was a big improvement from his 56% in December. Let’s find out more about this young star.

Trendon Watford: All You Need to Know

Trendon Watford had an impressive highs school career. He was a five star recruit who had multiple scholarship offers, ultimately accepting LSU’s offer in May 2019. Watford is considered one of the most accomplished high school players in Alabama high school basketball history. Watford played basketball for Mountain Brook High School in Mountain Brook, Alabama. He led Mountain Brook to three consecutive Class 7A state championships (2017, 2018, 2019). He was ranked 16th in the country by Rivals and 19 by 247Sports and ESPN. Watford averaged 23.7 points, 11.8 rebounds, 3.6 assists and 2.5 blocks during his senior season. He finished his high school career with 3,567 points, ranking among the top 10 in AHSAA history and set an AHSAA career record with 1,909 rebounds. Watford played for Coach Bucky McMillan at Mountain Brook. He played in the McDonald’s All-America game (10 points, seven rebounds, six assists) and the Jordan Brands Classic (18 points, seven boards). Aside from excelling on the basketball court, Watford also made the A-B Honor Roll at Mountain Brook.

When was Trendon Watford born?

Trendon Watford was born on November 9, 2000, in Birmingham, Alabama. His parents are Ernest and Belinda Watford. Watford has two siblings, a brother, Christian and a sister, Elise. His brother played for the Indiana Hoosiers and went on to play professionally.

What is Trendon Watford’s major in LSU?

Trendon Watford’s major at LSU is interdisciplinary studies. He is a fan of the Los Angeles Lakers.

How tall is Trendon Watford?

Which position does Trendon Watford play?

Did Trendon Watford declare for the NBA Draft?

“We are excited to support Trendon as he goes through this NBA Draft process. Trendon had an outstanding freshman campaign for LSU, showing great versatility and improvement as the season went on. His play helped us to a second straight 20-win season at LSU and a second-place finish in the SEC.”

The native of Birmingham, Alabama, who prepped at Mountain Brook High School, was second on the team in scoring at 13.6 points per game and a team best 7.2 rebounds a game. He averaged 13.8 points in the 18 Southeastern Conference games and 8.1 rebounds. He also averaged 1.7 assists per game.

Watford started 30 games, scoring in double figures 25 times, including 13-of-the-last-14 games the Tigers played. He scored 26 points at Vanderbilt, 22 points in the SEC/Big 12 Challenge game at Texas and 21 points in the win at home against Arkansas.

He finished No. 20 in the SEC in overall scoring while finishing third in the 18 league games in rebound average (6th overall). He had the sixth best field goal percentage in the league (48.9%, 157-of-321).

Watford showed his work ethic during the year improving his free throw percentage. The freshman and Coach Wade would consistently drill at the line after each practice and shootaround beginning after the holiday break, turning his average from 56.9 percent in non-conference games to an 18-game conference percentage of 75.7 percent, making 56-of-74 attempts. He finished the season making 67.4 percent of his attempts.

The freshman helped LSU finish the regular season at 21-10 and 12-6 and a tie for second place in the SEC. LSU’s 21 wins marked just the third time in the last 27 seasons that the Tigers won at least 21 games in back-to-back seasons. The 49 wins over the last two seasons was the third most in LSU history.

Is Trendon Watford coming back to LSU?

Trendon Watford will be back at LSU for at least one more season. The former Mountain Brook star announced Monday that he will withdraw from the NBA draft and return to school at LSU.

The former five-star recruit averaged 13.6 points and 7.2 rebounds per game as a freshman with the Tigers last season. Watford ranked sixth in the SEC in rebounding, sixth in field goal percentage (48.6 percent) and helped LSU finish the year 21-10.

His decision was part of a big day for Will Wade and the Tigers. In addition to Watford, the team also received word Monday that guard Javonte Smart and forward Darius Days will be withdrawing from the draft and returning to school. This is the message Trendon Watford had for the LSU fans when he decided to come back to the school:

Thank you to my family, teammates and coaches for all of the support these past few months.

We have some unfinished business in Baton Rouge. Let’s get to work. “