Who is Nick Wright and What Controversy was He Involved in? 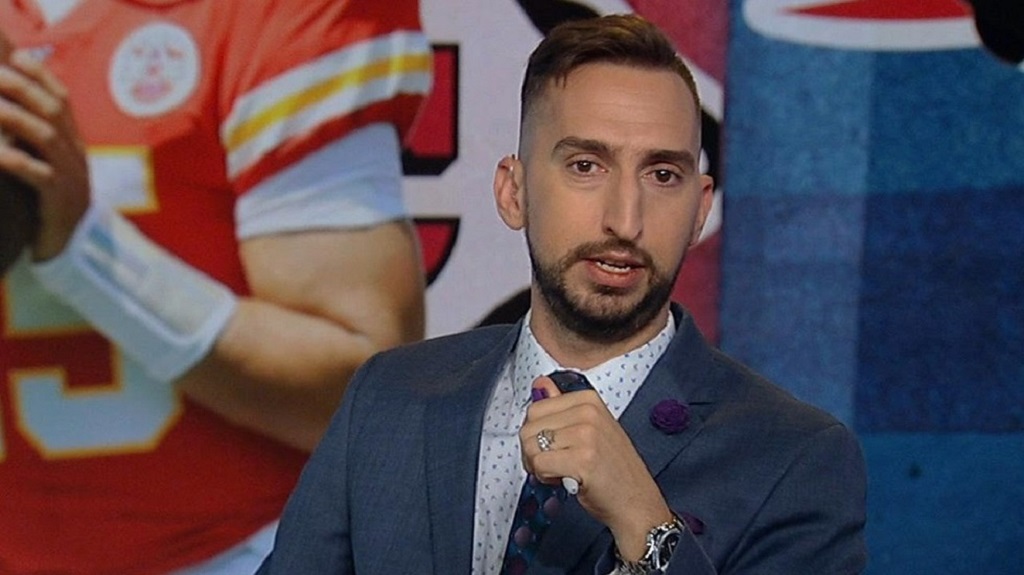 Nick Wright is an American sports analyst who appears on Fox Sports 1’s First Things First show. The show was launched with Jenna Wolfe as the moderator and Nick Wright and Pro Football Hall of Famer Cris Carter as the panelists. Two years into the show’s run, Cris Carter was removed from the show after having some dispute with Fox. After a revolving door of co-panelists, the show finally landed on former NFL wide receiver Brandon Marshall and former ESPN film director Kevin Wildes along with Wright and Wolfe in its current iteration. Nick Wright was mentored by legendary sports analyst Colin Cowherd (who also has his show The Herd with Colin Cowherd on FS1) and he appears on Cowherd’s show via the “global satellite network”. Nick Wright is also a sports radio talk show host. Let’s find out more about him.

Nick Wright: All You Need to Know

When was Nick Wright born?

Wright was born on October 3rd, 1984 in Kansas City, Missouri. That’s the reason behind his fanatical support for the Kansas City Chiefs of the National Football League (NFL).

Where did Nick Wright study?

Nick Wright attended Syracuse University, graduating with a degree in broadcast journalism in 2007. Shortly after graduating, Nick Wright went on to participate in Who Wants to Be a Millionaire.

After graduating from Syracuse, Wright began his sports broadcasting career as production assistant and weekend host for the KCSP 610 AM radio station, based in his hometown of Kansas City, Missouri. Nick Wright was soon given his own weekly show called What’s Wright with Nick Wright? on the station. The Pitch, a local Kansas City newspaper, called Wright “610 Sports’ most polarizing and likely most popular host,” and also named him the best sports personality in 2010. Following his time in Kansas City, Wright co-hosted In the Loop with Nick and Lopez on KILT 610 AM, a Houston-based radio station.

Buoyed by his success in sports radio and broadcast television in the local scene, Nick Wright soon started working with Fox Sports in 2016. His early work at Fox involved regularly contributing to FS1’s daily studio shows. He often appeared as a guest host of The Herd with Colin Cowherd. In late December 2016, Wright and former wide receiver Cris Carter co-hosted an episode of The Herd, while its regular host Colin Cowherd was out for vacation. Then-Fox Sports executive Jamie Horowitz used Carter and Wright’s co-hosting venture to test their chemistry together, in order to assess the potential of them co-hosting a daily morning sports talk show on FS1. At that point of time, the early morning section for FS1 (6-9 AM EST) only used to telecast game replays and show reruns and the network’s executives were looking towards having a show during that time. Carter and Wright proved to be a successful pairing, as they were then paired up to host FS1’s morning talk show First Things First, which premiered on September 5, 2017. Reporter Jenna Wolfe joined as the show’s moderator and anchor. Cris Carter departed from the show near the end of 2019 and he was eventually replaced by Brandon Marshall and Kevin Wildes. Nick Wright has also been hosting the weekday radio show What’s Wright on Sirius XM’s Mad Dog Radio.

Nick Wright’s sports commentary has received both praise and criticism from media outlets. Complex’s Aaron Mansfield wrote, “First Things First is actually [an] enjoyable, reasonable sports talk, and Wright is a big reason for that,” and opined that “[Wright] knows how to build a convincing argument behind statistics.” Mansfield added: “The Syracuse grad has differentiated himself in sports media because of his persuasive nature, his defend-LeBron-to-the-death mentality, and his willingness to confront prevalent social issues such as race in America.”

Wright’s willingness to discuss social and political issues within a broader sports-related context has also been noted and praised by media outlets. Wright’s opinions on the U.S. national anthem protests sparked by Colin Kaepernick’s activism was positively received by German Lopez of Vox, which wrote “Nick Wright has given what is perhaps the best distillation of the topic I have seen on television.”

Wright’s positive analysis of LeBron James’ basketball play has also been noted by media outlets. Mansfield commented, “Granted, yes, sometimes [Wright’s] LeBron takes are a stretch.” Kyle Koster of The Big Lead wrote, “Part of [Wright’s] shtick is not pretending he checks fandom at the door (see: his LeBron James love affair). That’s what helps him connect with viewers who, by and large, are sports fans themselves, grappling with the same biases.”

What controversy was Nick Wright involved in?

In June 2019, Wright received media attention for making an inaccurate claim during an episode of First Things First about the awarding of the 2015 NBA Finals MVP Award to Andre Iguodala. After multiple Finals MVP voters and a league representative debunked Wright’s version of events, Wright apologized.

Nick Wright, a co-host on FS1’s morning debate show, “First Things First” took heat from two prominent NBA writers and eventually apologized after telling a totally incorrect story about how the voting for the 2015 NBA Finals MVP went down.

Wright broke down a story that he claimed that it was “widely reported” that voters were split between Andre Iguodala (4 votes), LeBron James (4 votes and Steph Curry (3 votes). He said they didn’t want to give the award to LeBron James , since he was on the losing team, and that they couldn’t have a co-MVP, so the Warriors voters agreed to give all their votes to Iguodala, who was eventually named the MVP. Here’s what he said:

“What’s unfortunate for Steph is none of this is a legacy discussion if he had just won the Finals MVP he should have in 2015. And I think the audience needs a reminder because it wasn’t well-reported on in the moment, it’s only been well-reported on in the years since, what happened in that 2015 Finals, the year he won league MVP, averaged more points in the Finals than the regular season, and didn’t win it. 11 ballots are cast for Finals MVP, they come in, it was four for LeBron, four for Iggy, three for Steph. And they can’t have a co-Finals MVP.”

Cris Carter then chimes in with the inaccurate information that “The NBA, a number of years ago, they said they’re not going to have a loser be named Finals MVP.” Wright comments on that with “that’s not a rule, but it’s essentially become a rule.” Frank also refutes that in his tweet above; it hasn’t happened since Jerry West in 1969, but it isn’t prohibited. Wright then talks about LeBron’s performance, and then gets back to his account of what happened.

“So, what’s been reported is that the seven people who voted for the Warriors came together and said ‘Guys, we can’t have co-MVPs. We all obviously think it should go to someone on the winning team. Who’s it going to go to?’ And since Iggy had a 4-3 vote edge, they said ‘Okay, we’ll all vote for Iggy.’” Carter then chimes in with “Well, I didn’t know that,” appropriate considering the way the NBA and some of the writers involved since disputed this. Here’s a video of Nick Wright talking about it.

The media members who voted for the Finals MVP quickly spoke out on the matter and shot Nick Wright’s claims down through a series of tweets.

This absolutely never happened. No media member, including any voter, was privy to those results until they were announced on the court. The results were as we announced – Iguodala 7, James 4. Also, players from both teams are always eligible to win the Finals MVP https://t.co/EpTJererej

Here is the official release and votes from the 2015 Finals. This was issued the night the Finals ended. Thanks for being a fan. pic.twitter.com/v209knok4w

This is laughable. Tough to “come together” when voters are sitting at their press seats in different spots around the arena and an NBA rep grabs your ballot before the buzzer sounds. https://t.co/j6eJ1Dr8m0

Nick Wright went on to apologize via his Twitter handle after the writers said that his claims were false.

One of the perils of a mid afternoon nap is if you screw something up on TV that morning you can wake up to some of best NBA writers in the world saying you’re full of it.

I’ve now heard from multiple people I respect/trust that I was just flat wrong on this. Again, my apologies https://t.co/ihUS2frLfX

Who is Nick Wright married to?

Nick Wright is married to Danielle Wright and the couple live with their three children in New York City. Nick Wright is of Italian and Irish descent.

What did Nick Wright say about the Black Lives Matter movement?

When the footage of George Floyd being killed in police custody came out, the entire country was outraged and a lot of people were protesting against police brutality. In the midst of the chaos, Nick Wright, who is married to a black woman, gave an impassioned take on the whole situation and illustrated how black people in America have suffered through racism for many years continuously. In a portion of the take, an emotional Nick Wright also talked about the prejudice that his black son faced at the hands of the police. Here’s what Nick Wright said: