AJ Lee: The Best Matches of the Legendary Diva’s Career 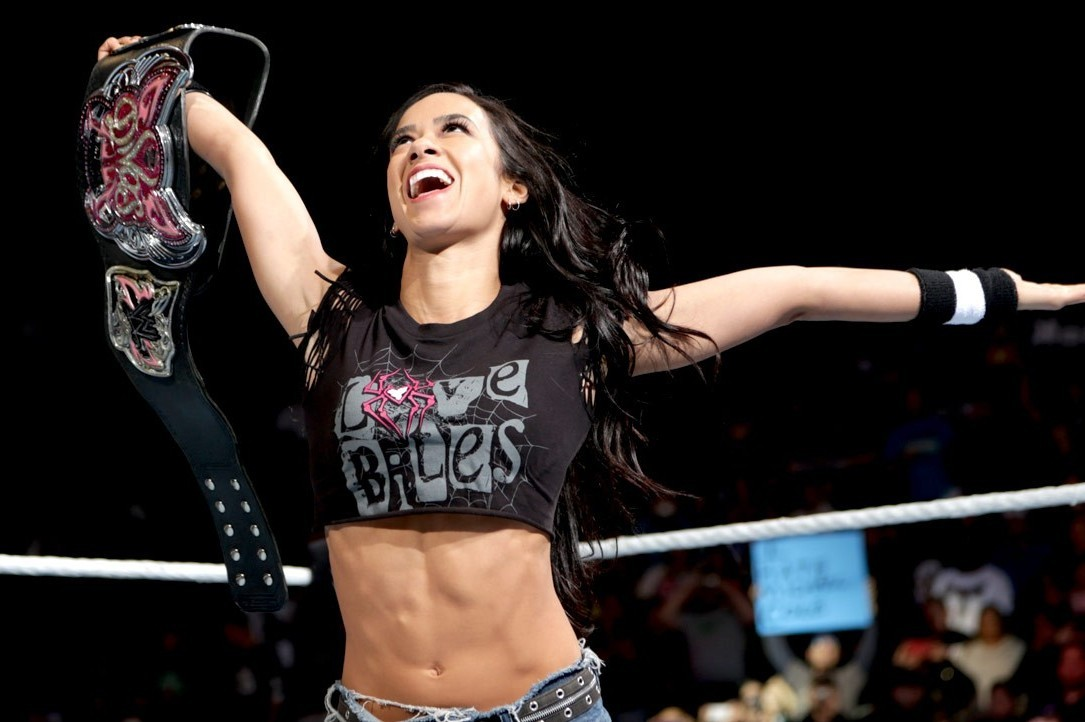 For many years, the Women of the World Wrestling Entertainment (WWE) were nothing more than eye candies. They were more likely to win the Playboy Playmate of the Year Awards than a Slammy Award. However, under the leadership of Stephanie McMahon-Helmsley, a Divas Revolution was ushered in and the women of WWE started showcasing their awesome wrestling skills as well. The oiled up eye candy with massive breast implants was replaced with an athletic performer. Luckily they managed to strike the middle ground between looking athletic and glamorous as well. So they represent the best of both worlds. WWE is a form of visual entertainment after all, looks do matter. Some of the divas that led the way for this revolution are Sasha Banks, Charlotte Flair, Becky Lynch and Natalya. Because of her sudden and unexpected departure from the WWE just before the Diva’s evolution, AJ Lee’s contribution is somewhat overlooked. However, she was one of the greatest divas of all time. Her reign was long and eventful and she was an amazing champion.

Here are the best matches of AJ Lee’s career:

This was before the days of Full Sail University. The show’s third season had a lot of female contestants and AJ Lee was one of them. The season was packed with wacky storylines, funny moments, and lots of comedy relief. However, AJ Lee and future Women’s Champion Naomi had other ideas.

As the show neared its finale, these two women stepped into the ring and put on the best women’s match in all of WWE that year. As a matter of fact, it ended up being the best match for a few years to come. AJ Lee emerged victorious, but was still eliminated from the competition by the fans at the end of the night. Still, this match proved that she belonged with the top professional wrestlers of the world.

This is definitely one of the most “interesting” entries on the list. The love triangle between AJ Lee, CM Punk, and Daniel Bryan was the focal point of WWE storylines in the summer of 2012. The two men feuded with Kane and AJ Lee inserted herself into things. As a result of that, Raw’s General Manager John Laurinaitis booked this extremely weird tag match.

CM Punk did his best to keep AJ Lee out of the action. However, when he got in trouble, she tagged in. Against Kane. It was an entertaining match, which was punctuated by the iconic moment between Kane and AJ Lee.

The friendship between AJ Lee and Kaitlyn, the “Chickbusters,” blossomed during their time together in NXT. However, the writers at WWE turned that on its head and made that into a bitter rivalry that went way beyond the ring. AJ Lee and Big E tricked Kaitlyn and humiliated her with a fake secret admirer prank. This led to them mocking each other’s entrances and many other funny incidents. It all came to a head in this Divas Championship contest.

Kaitlyn came into the match in a fury. She overwhelmed AJ Lee with a flurry of immediate attacks. This had a great blend of storytelling, technical offense, and hard-hitting moments. The whole thing was a fantastic match, with both Kaitlyn and AJ Lee working each other very well. It also started AJ’s near-300 day reign as Divas Champion and is quite possibly the best match of her career.

The feud between AJ Lee and Vickie Guerrero went on for years. Like most women on the WWE roster, AJ Lee didn’t like Vickie Guerrero (her character was designed to be as annoying as possible anyway). AJ Lee also had a habit of getting under the skin of every female on the roster. Those two things came to a head when Vickie Guerrero announced this match.

AJ Lee defended her title against every other woman on the roster. This had the makings of being a total mess and a royal clusterf**k but all the women worked very hard to keep the crowd engaged. This was the same Wrestlemania where Brock Lesnar broke The Undertaker’s undefeated Wrestlemania streak. This fight featured a lot of fun spots from everyone, before AJ retained with a submission on Naomi.

This was supposed to be the rivalry between the two alpha females of the WWE for years to come. AJ Lee had long been one of the best on the main roster. When Paige debuted the night after WrestleMania and beat her for the Divas Title, everybody expected it to be a start of something magical. However, the rivalry turned out to be a dud as most watches ended up being disappointing. Except for the match at SummerSlam 2014. AJ Lee defended her title against Paige and they put together their best outing. The duo worked each other beautifully and their moves came off fluidly, while they played into the storyline of being frenemies. Paige countered the Black Widow into the RamPaige DDT to win her second and final Divas Title.

While the AJ Lee vs. Paige rivalry ended up fizzling out without much of an explosion. The thing that really kept the story going, was the villainous role of Nikki Bella. They squared up for Paige’s Divas Title in Nashville, Tennessee.

Most fans expected that Paige would retain the belt or that recent heel Nikki Bella would win the title. However, to everyone’s shock AJ Lee made Paige tap out to win her third Divas Title. The match was intense, featured big bumps, and relentless action.

Despite its name, WWE Main event is not a very important show for the WWE. It rarely features big stars and none of what happens matters to the bigger shows like Raw and SmackDown. However, there was a time when this was not the case. When the WWE Network launched, they needed to run live shows to test the streaming capabilities.

They used Main Event to do so. For that time, stars like Daniel Bryan, Sheamus, and AJ Lee were used. One of the hidden gems of that test run was AJ Lee’s defence of her Divas Title against Natalya. Natalya is known for her in ring skills and her ability to work her opponent very well, so that resulted in a great match.

The rivalry between AJ Lee and Nikki Bella was one of the best things both women did during their careers. Nikki Bella had evolved into a powerhouse of a wrestler and the diminutive AJ Lee served as the perfect opponent in a David vs Goliath battle. It gave both women clearly defined roles that they played perfectly.

That was enough to get the crowd fully immersed in this meeting. The Divas Title may not have been up for grabs, but AJ Lee fought like everything was on the line. Nikki Bella snatched the win in this closely contested match with a Rack Attack.

AJ Lee And Paige Vs. The Bella Twins – WrestleMania 31

Nikki Bella won the Divas Championship from AJ Lee and went on an impressive reign which broke AJ Lee’s previous record. Along with AJ, Paige was the biggest thorn in Nikki’s side during the early days of her title run. The numbers game kept beating them (especially because of Nikki’s twin sister, Brie Bella). Paige and AJ Lee decided to counter them by teaming up.

The battle went down at WrestleMania 31 in front of over 75,000 fans. Paige was ravaged by the Bella twins before she managed to tag AJ Lee into the match. She came in with raging fury and attacked the twins before beating Nikki Bella with her finisher, the Black Widow. With this win, AJ Lee finished her Wrestlemania career with a 2-0 record.

As viewers watched this match, they weren’t aware of its significance. Without any prior announcement, it ended up being the last match of AJ Lee’s career. The main reason she quit WWE is that her husband CM Punk was unceremoniously fired by the WWE. The match was very good and a rarity at that time as the women were given 15 minutes to compete. They all came together for a match that utilized all of their strengths quite well. Naomi ended up winning the match with her finisher, Rear End and AJ Lee said goodbye to the WWE Universe for the final time.