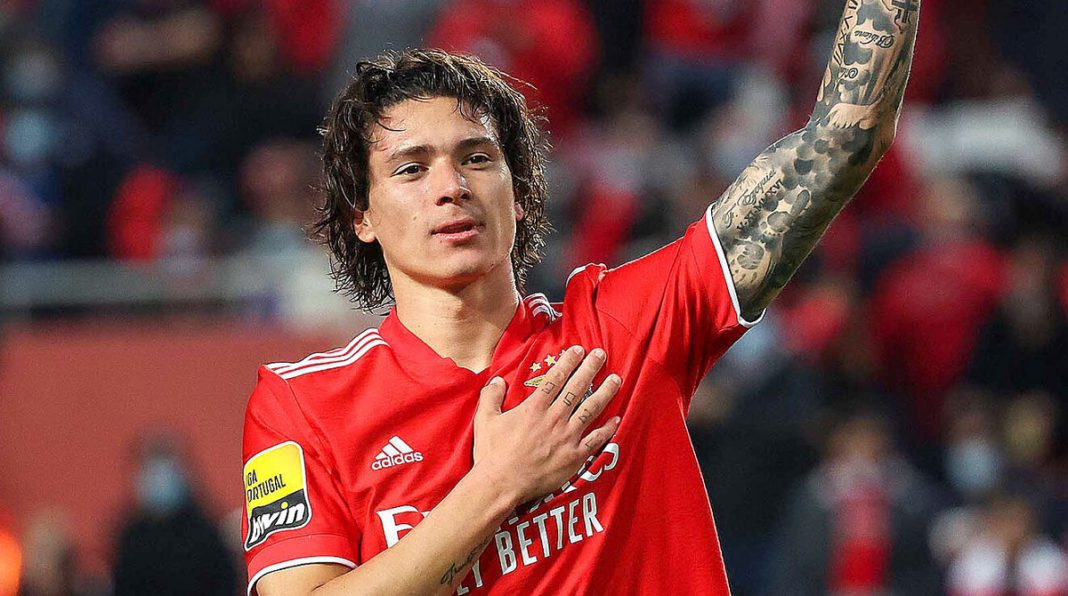 A discovery or prodigy of Benfica Lisbon and current striker for Liverpool FC, Darwin Nunez is making a name for himself on the European scene. Powerful, fast, technical, and a good finisher, the young Uruguayan has all the qualities to become a reference in his position since being named in the Primeira Liga Team of the Year! In terms of his career, his most popular highlight was after a high-quality season with Benfica Lisbon. With 20 goals in 22 games, the young Uruguayan during the Champions League helped extinguish FC Barcelona one evening in September 2021 (3-0), scoring twice and accelerating the departure of Ronald Koeman, a few weeks later. Against Ajax in Amsterdam, he returned the cover, scoring the goal of Portuguese qualification for the quarter-finals.

Darwin Nunez: 8 Amazing Things To Know About The Uruguayan Footballer!

1. Darwin Nunez was the most expensive signing of Benfica Lisbon:

Despite his young age (now 23), Darwin Núñez impresses wherever he goes. Spain and Portugal will have been conquered before he came to England where he currently plays in 2022.

Let’s go back to the summer of 2020, just after the “Final 8”, at that time, the transfer window was in full swing and a player turned the heads of several clubs. This player is Darwin Nunez, just out of a season with sixteen goals in thirty-two games, in Almeria, in the Spanish second division. The Uruguayan is of particular interest to Pablo Longoria (OM), but also to Julien Stéphan. The one who was the coach of Stade Rennais at the time would declare in particular: “It is a very interesting attacking profile, very complete, with great generosity”. As a reminder, the Stade Rennais F.C.had finally signed Serhou Guirassy from Amiens SC, author of ten goals in Ligue 1 during his first season.

One decision that doesn’t include regret is the club-record transfer worth €24 million for Darwin Nunez to play in Benfica Lisbon. In Lisbon, Darwin Nunez made an encouraging debut and scored 6 goals for 10 assists.

2. At Benfica he adapted, suffered a knee injury, and still played well:

After a mixed first season, Darwin Nunez has already scored twenty-one goals in twenty-three league games this season. If we add his three assists, he is decisive more than once per game. Able to play in all positions on the attack line, he has the advantage of being versatile.

In 2022, after Darwin Nunez signed a five-year contract with Portuguese club Benfica Lisbon, the kid is also formidable in the Champions League. Author of five goals during the 2021 campaign after he came back from knee surgery, he scored on the lawn of Bayern Munich, a double against FC Barcelona.

Let’s not forget that with Benfica, Darwin Nunez scored the qualifying goal for the C1 quarter-finals at the Johan Cruyff Arena in Amsterdam, against Ajax (1-0), on March 15.

He scored another against Klopp’s Liverpool, despite the defeat (1- 3).

The player begins to make references at the highest level, enough to attract the greed of major European clubs. Manchester City but also FC Barcelona are closely monitoring his situation, while he is under contract until 2025 with the Lisbon club.

Darwin Nunez, born on June 24 like Lionel Messi, grew up in Artigas, an Uruguayan town of 40,000 inhabitants located on the border with Brazil. Spotted at the age of 14 by CA Peñarol, the biggest club in the country, the young Darwin quickly suffered a rupture of the cruciate ligaments, which kept him away from the field for more than a year. He must wait 18 years to start in the first division, before gradually integrating the national youth teams.

In 2019, he was selected for the Under-20 World Cup in Poland: Nunez scored Uruguay’s first goal against Norway (3-1), six days before Erling Haaland’s historic nine-times win against Honduras (12-0), which revealed it to the eyes of the world. A few weeks after the tournament, during which he finished with two goals on the clock, Darwin Nunez took off for Spain and signed up for Almeria, in the second division.

In Andalusia, the Uruguayan blazed and scored 12 goals before the Covid-related cut, in just 20 matches, then 4 new achievements on recovery, in June and July.

The clubs are panicking, and while Stade Rennais FC was positioning itself Benfica finally managed to afford the little prodigy, in September 2020, for the sum of 24 million euros, the biggest sale in the history of a Spanish second-division club.

4. His first international debut was against Peru:

It is UD Almeria, a resident of Spanish D2, which recovers the sports rights of Núñez to tell a tale of a little less than 10 million euros. In the space of 32 matches, the Uruguayan center-forward scored 16 goals and provided 2 assists in the Championship. It allows Almeria to finish in an honorable fourth place. Enough to arouse the envy of more upscale clubs. And open the doors of the Uruguayan selection to him. In his very first cap, Darwin Núñez equalized for Celeste against Peru… five minutes after coming on. Remarkable. In 2020, it is finally Benfica Lisbon that offers itself the South American nugget.

Diego Forlan, Luis Suarez and Edinson Cavani are three players who have two things in common. That of occupying the position of attacker. And that of having left their mark on the history of the Uruguay national team. Darwin Núñez could follow in their footsteps.

Former Uruguay star Diego Forlan is already a fan of the player, even comparing him to Edinson Cavani and Luis Suarez. With his qualities of speed, the player is particularly formidable in the transition phases.

A few years since Joao Félix, who is considered the Portuguese prodigy, Darwin Nunez, became the new jewel of Benfica. The Portuguese, who left for Atletico de Madrid in 2019 (at the age of 18 and a half), may have burned his wings by leaving too early.

Oh the other hand, within just a season and a half, Darwin Nunez had already convinced the fans of Benfica Lisbon, before – perhaps – seducing those of a new big European team. Like Colombian Luis Diaz, who left FC Porto for Liverpool at the end of the transfer window, Nunez would soon play for England. The young Uruguayan will never stop playing for his country of course.

The young Uruguayan international (17 caps in 2022) has all the qualities of a modern striker. It is difficult not to see him often shaking the nets of opposing cages in the future.

His progress in the finish makes him a player comparable, in style, to the new Bianconeri Dusan Vlahovic. His ultra-complete profile also allows him to play in all offensive positions, without having difficulty surveying the entire width of the field. Fast and generous, Nunez seems to have the qualities to last at a very high level.

7. Before his transfer to Liverpool, these clubs wanted Nunez:

The Londoners of West Ham tried to approach Benfica, with a view to a transfer. An offer of 48 million euros was also refused by the Eagles, who hoped to inflate the bids as in 2019, during the transfer of Joao Felix to Atlético de Madrid against 127 million euros.

In England, Manchester United also seems to be monitoring the situation of the Uruguayan, linked until 2025 with the club from the Portuguese capital. FC Barcelona, ​​in the grip of significant financial difficulties, would also aim to sign Nunez but he fell into the contract of Liverpool for a cool 75 million euros.

8. The future for Darwin Nunez:

Indeed, in the 2021/2022 season, Darwin Núñez certainly did not allow Benfica to recover the title of champion promised to FC Porto. But as an individual, he easily crossed the 30-goal mark in all competitions, even turning to an average goal per Championship day. Brilliant, especially for a 22-year-old back then. As of 2022, he is 23.

Despite a contract that runs until June 2025, and an estimated market value of more than 75 million euros, European leaders from Liverpool did not hesitate to come forward to recruit him. One thing is certain, one of the great absentees from the Copa América 2021 still has a bright future ahead of him, at a club level as with Uruguay.