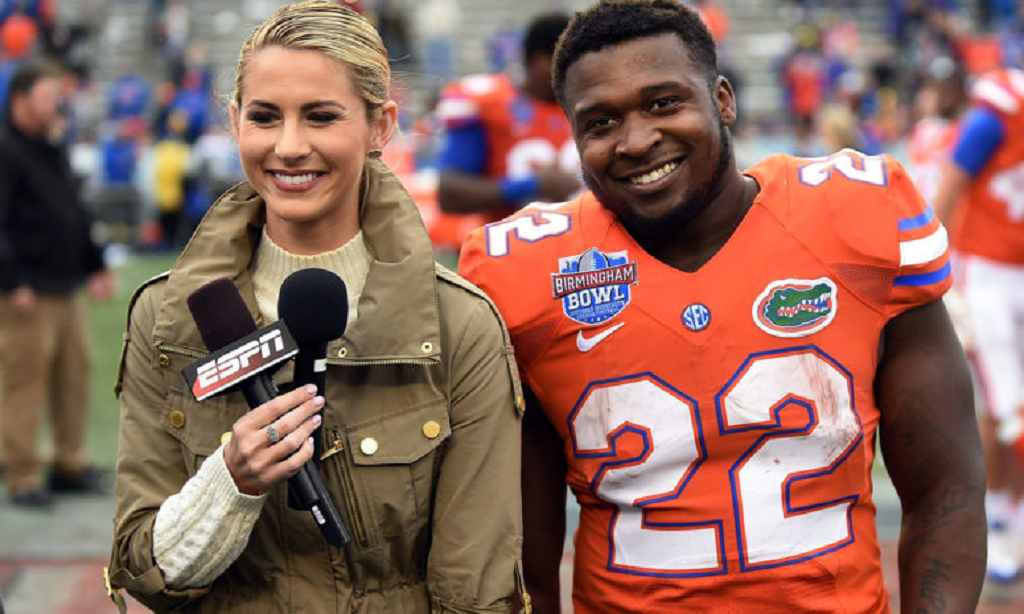 Laura Rutledge is a well-known reporter as well as a host who works for top news channels such as CNN International, SEC Network and ESPN. She won the Miss Florida title in 2012 from the predecessor Kristina Manolo. She is a talented ballet dancer who earned a graduation degree from the University of Florida doing the majors in Broadcast Journalism.

Laura Rutledge is also known as one of the most beautiful and popular college sports journalists in the United States.

Laura Rutledge: A Fast Look At The Life Of The Reporter

Laura Rutledge was born as Laura McKeeman. She was born in  St. Petersburg, Florida, United States of America on October 2, 1988.

She spent her childhood in Florida and went to ‘Celebration High School’ in Celebration, Florida.

As a kid, Laura was interested in trying different makeup products and dressing up. This led to a fantasy about becoming famous and appearing on television. Subsequently, she started prepping for beauty pageants when she was still a kid. She was also interested in dancing and hence attended ballet classes.

Her love for sports came from her parents, who were ardent fans of college football. Her brothers too were sports enthusiasts. While Laura did not play a lot of sports during her growing up days, she loved watching sports on television. Because of her interest in sports, she had made up her mind to become a sports journalist by the time she graduated high school.

During her first year at the university, she figured out that she could make some money by working at the on-campus radio station. She landed her first job as a radio jockey for the ‘WRUF’ radio station that operates from the university’s main campus. She loved her job from the very beginning.

Laura took up a program in communications right after joining the university. But she later studied telecommunications as appearing on television was a childhood dream she wasn’t willing to develop.

She studied at the university from 2007 to 2011 and worked for the on-campus radio station until her graduation.

In 2011, Laura met professional baseball player Josh Rutledge via a mutual friend.  Laura and Josh Rutledge started dating after meeting each other again in Birmingham. Laura got married to Josh Rutledge on December 7, 2013.

Laura Rutledge and her husband, Josh Rutledge, took to Twitter in 2019 to announce the birth of their first child. “She’s here and we’ve never known love like this,” Laura Rutledge wrote in a tweet. “Reese Katherine Rutledge. And yes, we share the same birthday.”

How She Became A Fox Sports Reporter:

Laura landed her first internship program at ‘Fox Sports Florida.’ However, she was not given the kind of work she was hoping for. Instead, she was assigned the job of copying DVDs of sports broadcasts.

Thanks to an unexpected incident, she was given an opportunity to appear on screen for the first time. One of the on-air presenters had a last minute conflict with the broadcasting unit, hence Laura was asked to replace the presenter for a short period. Laura seized the opportunity and was even appreciated for her work.

She was then asked to present the games played by professional baseball teams, such as ‘Tampa Bay Rays’ and ‘San Diego Padres.’ These games were broadcast by ‘Fox Broadcasting Company.’ It did not take long for Laura to become popular among ‘Fox Sports’ audiences. Her popularity went a long way in cementing her position as a ‘Fox Sports’ reporter.

Following her victory in the ‘Miss Florida’ pageant, she resumed her broadcasting career and covered the ‘National Paintball Championship’ which was held at Lakeland, Florida in 2012. The championship was organized by the ‘National Collegiate Paintball Association’ and Laura worked as an on-field reporter for ‘Fox College Sports.’

‘SDLive’ was started by Laura so she currently serves as its producer along with hosting the show.

By the end of 2013, she had become popular working for ‘Fox Broadcasting Company.’ In 2014, Laura was given an opportunity to host ‘Coors Light Postgame Show’ on ‘Fox College Football.’ She also hosted the halftime shows of college football games telecasted on ‘Fox Sports Network.’