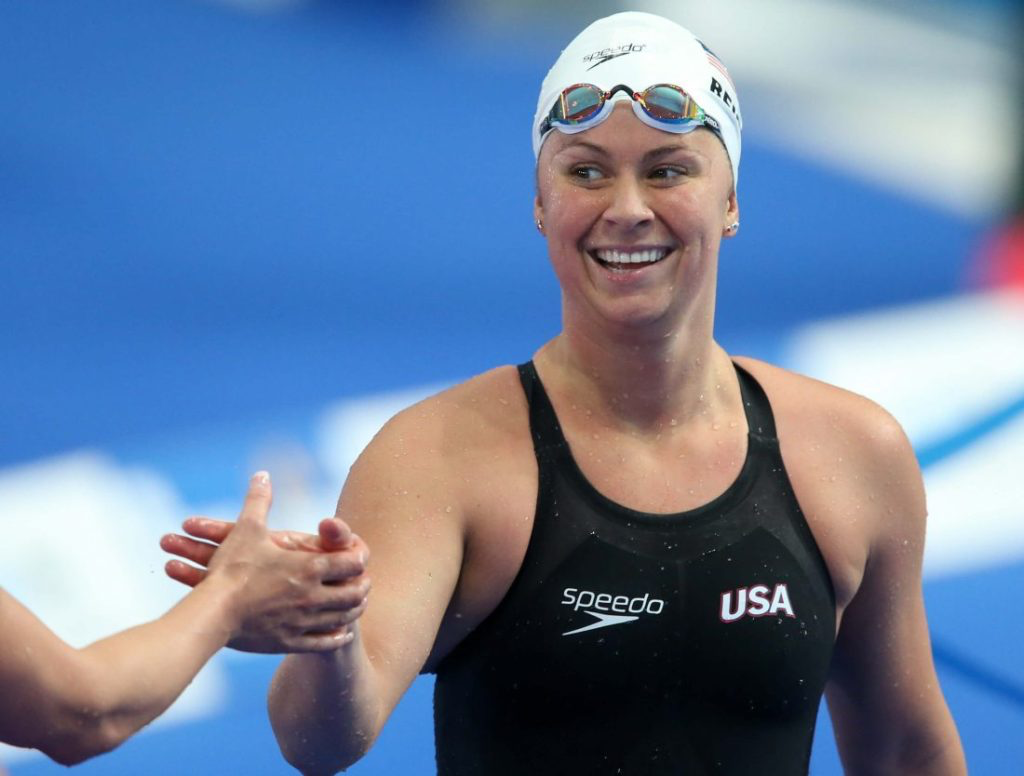 Olympic Medalist Elizabeth Beisel is an American backstroke swimmer who won a silver and bronze at the 2012 London Olympics. Beisel is an IM and backstroke specialist, but she’s extremely versatile with the ability to swim really anything, including distance free, butterfly and breaststroke. She describes herself as gregarious, competitive, and loyal. Is that why she’s so successful and went on to join Survivor? Let’s take a look at Elizabeth Beisel’s life:

Elizabeth Beisel: Biography Of An Olympian

Where is Elizabeth Beisel from?

Her hometown and current residence is Hometown: Saunderstown, Rhode Island.

What are Elizabeth Beisel’s hobbies?

With her unique personality, Beisel has made headlines thanks to her hearty laugh and humor. She uses that humor to lighten up any situation, and especially to keep her mind light and enjoy the moment before a big race.

She loves Surfing, violin, and wakeboarding. She also said: “ I love classical music and have played the violin since I was 3 years old”.

What are Elizabeth Beisel’s pet peeves?

“I hate when people have conversations while scrolling on their phones. Be present and in the moment without your phone.

She also said her best friend Allison who has been to three Olympics with Beisel. After the 2012 Olympics where Allison won five medals, she went through post-Olympic depression. She is now a mental health advocate for athletes and speaks around the country. She is a true hero.

What accomplishments are Elizabeth Beisel most proud of?

Becoming the youngest member of the United States Olympic Team in 2008 at 15 years old.

“I realise that swimming isn’t a rest-of-my-life career. I have chosen to enjoy what I do or else I would end up miserable going through the motions.”

“WOAH. Did you guys hear the news?” Biesel, 27, wrote via Instagram on December 19, 2019 announcing the fact that she and Nichting, 23, were dating. “I’ve got a curly haired boyfriend named Jack and he is simply the most wonderful human being I know. In the photo announcement, followers see the former Olympian getting a piggyback ride from her new boyfriend, showing off their matching hairstyles as they almost kiss.

The Olympian added, “And yes, we share hair products.”

“I am beyond proud to call this curly headed, exuberant, and compassionate woman my girlfriend/twin,” he captioned a series of photos with his lady love. In his four pictures, fans can see the pair laughing together, hanging out in a pool, dressed up as tigers and kissing as their similar curls blow in the wind.

“Kara. Her exuberant personality and positive attitude reminds me of myself”.

What’s your primary motivation for being on Survivor?

“To compete again. I retired from swimming a year ago and I miss challenging myself and bringing myself to the edge. Second reason… one million dollars”.

Why do you think you’ll “survive” Survivor?

“I’m physically, mentally, and socially strong. I can easily connect with people—my alliances will be strong and help carry me through the game. I can win individual Immunity due to my strength as an athlete. I’m a tough girl who will fight until the end”.

Elizabeth Beisel, originally from the small state of Rhode Island, was born on August 18th 1992. Her father is Ted and mother, Joan Beisel swam for the University of Rhode Island in the United States of America. She has a brother named Danny.

Beisel took up swimming at age 5, when she began as a diver, but quickly switched the sport she now loves. She began swimming because she loved the water and discovered she was not good at diving. Her parents were also adamant that she should learn how to swim.

When she grew up, she said her parents were the most  influential people in her career according to USA swimming.org, 06 Aug 2016.

She showed prominence at an early age — by just 13 years old, she was a member of the U.S. National Team. She was known early on for her 200-meter backstroke abilities. At age 14, Beisel competed in her first World Championships — she finished 12th overall in the 200-meter backstroke. She made her international competition debut at the 2007 World Championships at age 14.

She was given the nickname Diesel and  Bekel [at one meet, she was entered as ‘Bekel’ so people started to call her that].

In 2008 Beisel was enrolled to swim at the U.S. Olympic Trials in multiple events, including her specialties, the 200-meter backstroke and the 400-meter IM. At just 15 years old, Beisel ended up finishing second in both events to bear the U.S. flag on her cap at the Beijing Olympics. As the youngest member of Team USA, Beisel went on to finish within the top eight of both of her events in Beijing, fourth in the 400 IM and fifth in the 200 back.

Out of high school Beisel was one of the nation’s top recruits. She committed to the University of Florida, where she studied communications. As a freshman Beisel made an immediate impact — she was named the SEC Female Freshman Swimmer of the Year after winning both the 200-yard backstroke and the 400-yard IM.

When she returned to the collegiate scene for her sophomore season, she was ready to once again take on the NCAA. She picked up three more SEC individual titles in the 200 and 400 IM in addition to the 200 backstroke en route to SEC Female Swimmer of the Year honors. She also won the NCAA Championship in the 200 backstroke, and finished third in the 400 IM. She also swam on the 800 free and 400 medley relays.

When it came to her senior year Beisel had a leading role as team captain, and had to switch up her event order to benefit the team. She opted out of the first day of the NCAA competition, and instead chose to do a difficult double of the 200 fly and 200 backstroke. She finished runner-up to Stanford’s Maya DiRado in the 400 IM, and made it into the top eight of the 200 backstroke, finishing fifth, but she only made it to the semi-final in the 200 fly.

Beisel graduated with a degree in communications.

After Beijing, Beisel competed at the 2009 FINA World Aquatic Championships in Rome where she finished third in the 200-meter back, just missing the American Record. Beisel also finished fifth in the 400-meter IM.

After winning the 400 IM national title in 2009, Beisel slipped to fourth in 2010, but defended her title in the 200-meter back qualifying her for Pan-Pacs – where she won gold medals in her two signature events, winning her first international gold.

The following year at the 2011 World Championships in Shanghai, Beisel competed as a member of Team USA. She won her first World Championship title in the 400-meter IM, and finished fifth overall in the 200-meter backstroke.

At the 2012 U.S. Olympic Trials Beisel swam the 400 IM, 200 backstroke and the 400 freestyle. After winning the 400 IM, and finishing first by more than two seconds, she was runner-up in the 200 back to qualify for the team in her second event. Beisel went on to finish fifth overall in the 400 freestyle. In London, Beisel won her first Olympic medals, earning silver in the 400 IM and bronze in the 200 backstroke.

After London, Beisel had two more years of collegiate swimming, but she competed at the 2013 World Championships in Barcelona to finish third overall in the 400 IM and 12thi n the 200 IM.

When she graduated in 2014, Beisel immediately turned professional. She was sponsored by Speedo and was a member of the Mutual of Omaha Gold Medal Team.

In 2014, Beisel made the Pan Pac’s roster after she won the 400 IM at the Phillips 66 National Championships. At Pan Pac’s Beisel won the 400 IM, and also took home a bronze medal in the 200 backstroke.

In her third Olympic Trials, Beisel finished second in the 400M IM behind Miya DiRado, securing her spot on the U.S. Team for Rio.

Beisel failed to medal in the 400 IM, finishing sixth in the finals.

Beisel finished second in the 400M IM behind Leah Smith, once again placing her on the roster for the US Team heading to Budapest.

Beisel announced her retirement in 2017.

She retired from competitive swimming in 2017 to focus on public speaking and delivering swim clinics. Beisel one day hopes to work in front of the camera, with her dream career being a sports reporter at ESPN. She grew up with a dream of being an anchor on the Today Show, but would be happy working at a local news station.

After that, her dream career was being a sports reporter for ESPN, but she would settle for a job with a local news station. She hopes to land a role with NBC covering the 2020 Olympic Games in Tokyo.

She worked in the sports department at her local NBC affiliate in Providence, RI, United States of America.

After Swimming, Beisel became a contestant on season 39 of Survivor: Island of the Idols.

Beisel was voted out on day 30 of the competition after Karishma Patel decided to use her hidden immunity idol to save herself. At the time, she called her exit “bittersweet.” She revealed during her Ponderosa interview on November 27 that “I’ve made new friendships that will last an entire lifetime. So, I think the pros outweigh the cons of me getting voted out right now.”