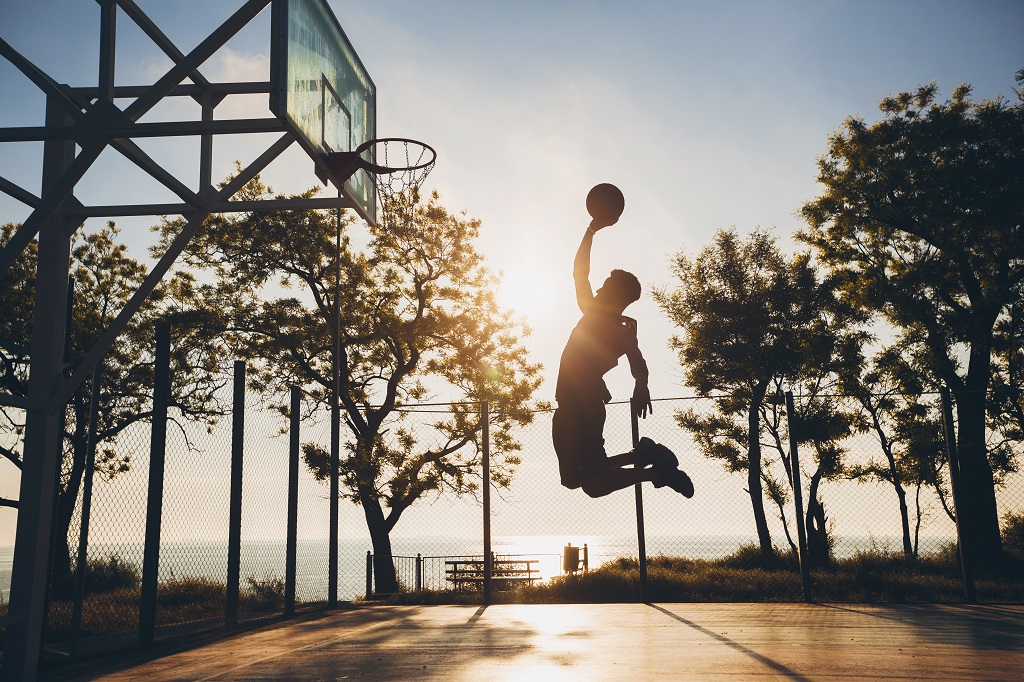 Basketball was originally played with a different ball. As odd as it sounds, the game was initially played with a typical soccer ball as well as peach baskets. Interestingly, referees had to retrieve the ball every time a basket was made. However, this changed in the year 1900 when string baskets were introduced and backboards were put in place to deter spectators from disrupting a shot.

Interestingly, the game was way shorter; it comprised of two fifteen-minute halves with a 5-minute break in between. Referees were charged with the duty of timekeeping using watches but all these changed in the early 1950 as a mode of combating stalling tactics employed by some teams.

1. The first basketballs were colored brown. However, a brown ball can be difficult for both players and fans to see. To increase ball visibility, Coach Tony Hinkle of Butler University came up with an idea to develop an orange ball in 1957.

2. Basketball was invented by International YMCA Training School (now Springfield College) Physical Education teacher James Naismith in 1891 as a way for students to keep fit and busy indoors during winter. The first hoop was made from a peach basket provided by the school janitor and nailed to a balcony ledge.

3. The American Basketball League (ABL) was the first organized professional basketball league to use the three-point line in 1961.

4. The first three-point shot in the National Basketball Association (NBA) was made by Boston Celtics guard Chris Ford on October 12, 1979, against the Houston Rockets. This was the same game that marked the debut of Celtics legend Larry Bird.

5. Steals and blocks only became official (recorded) stats in the NBA starting from the 1973-1974 season. During that season, Elmore Smith recorded the most blocks in an NBA game with 17 on October 28, 1973.

6. The 24-second shot clock was the brainchild of Syracuse Nationals owner Danny Biasone and general manager Leo Ferris. The NBA first adopted the shot clock during the 1954-1955 season.

7. The first NBA national television contract was signed during the 1953-1954 season between the NBA and Dumont Television Network.

8. The first basketball game in Europe was arranged by Mel Rideout in Paris.

12. Prior to the founding of FIBA, basketball was under the purview of the International Amateur Handball Federation (IAHF). The federation at the time handled all ball games played by hand. The treaty that transferred oversight of basketball to FIBA was called the Protocol of Stockholm.

14. Contrary to their name, the Harlem Globetrotters were not from Harlem, New York. Their origins stem from Chicago, Illinois.

16. Back in 1940, the Harlem Globetrotters were still a highly competitive team. They won the 1940 World Professional Basketball Tournament beating the Chicago Bruins.

17. Goaltending was only considered a violation in 1944, due to its use by Hall of Famer George Mikan against opponents. Prior to 1944, goaltending was considered legal since there were relatively few players that were able to execute it.

18. Philadelphia Warriors forward Joseph “Jumping Joe” Fulks holds the record for the most missed field goals in a regular season game with 42 set during a game against the Providence Steam Rollers. He attempted 55 field goals, making only 13.

20. San Antonio Spurs Coach Greg Popovich has the record for the fastest ejection in NBA history. He was ejected 63 seconds into a game against the Denver Nuggets.

21. The longest game in NBA history lasted 78 minutes and had 6 overtimes. It was a January 6, 1951 game between the Indianapolis Olympians and the Rochester Royals. The Olympians won 75 to 73.

22. On December 13, 1983, the regular season game between the Detroit Pistons and the Denver Nuggets set multiple NBA records. The game ended after three overtimes with Detroit winning 186 to 184. The game set the NBA record for the most total points scored in a single game, and the most and second-most points scored by a team in a game.

23. Gene Conley won 3 championships with the Boston Celtics and 1 with baseball‘s Milwaukee Braves in the 1957 World Series. He is the only player to win an NBA championship and a World Series.

24. Olympic decathlete Bruce Jenner (now Caitlin) was drafted in the 7th round of the 1977 NBA draft by the Kansas City Kings.

25. The official basketball size for men’s competitive basketball is size 7, having a circumference of 29.5 in or 75 cm.

26. The official basketball size for women’s competitive basketball is size 6, having a circumference of 28.5 in or 72 cm.

27. The Moneyball worth two points in NBA’s three-point shooting contests is modeled after the coloured red, white, and blue ball used by the American Basketball Association.

30. Sergei Belov is the first international player to be inducted in the Basketball Hall of Fame in 1992. He is considered to be among the best European players to have played basketball and was part of the Soviet team that beat the United States for the gold medal in the 1972 Munich Summer Olympics.

32. Coach Paul Westhead is the first coach to win championships in both the NBA (Los Angeles Lakers) and the WNBA (Phoenix Mercury).

34. Prior to 1966, the NBA had territorial draft picks. These were special picks that allowed teams to forfeit their first round picks and instead select a player within a 50-mile radius from the city.

35. The New Jersey Nets protested the result of their November 8, 1978 game against the Philadelphia 76ers. The final 17:50 minutes of the game was replayed on March 23, 1979. A trade had already occurred between both teams prior to the game replay. Thus, three players, Eric Money, Harvey Catchings and Ralph Simpson, are officially listed as having been members of both teams for the same game.

36. All NBA floors are made from hard maple (Acer saccharum) from board cut 3/4ths of an inch thick. The only exception is the floor in Boston’s TD Garden, which is made of red oak.

37. The traditional basketball jersey consists of a sleeveless jersey and shorts. In 2013, the NBA experimented with adding sleeves to their jerseys, making them look similar to t shirts. This prompted a wave of complaints from players and fans. The experiment lasted until 2017, when Nike took over the uniform contract of the NBA and declared that they would no longer push through with using sleeved jerseys.

38. NBA rules state that the cord basketball net should not be less than 30 thread and not more than 120 thread.

39. As per NBA rules, a minimum of nine balls are to be provided for each team for pre-game warmups.

41. The Denver Nuggets play at a home stadium that is one mile (5280 ft) above sea level. Studies have shown that this high elevation gives not just the Nuggets but all Denver home teams across major American sports a distinct advantage when it comes to playing home games.

42. A 2017 study showed that Eastern Conference teams in the NBA may suffer from a disadvantage by traveling for away games westward. The disruption in the circadian rhythm brought about by East to West travel, which counters the West to east rotation of the Earth, affects individual stress and fatigue levels and may impair performance of visiting teams.

43. The average distance an NBA player runs per game is around 2.5 miles. During the 2019-20 NBA season, Blazers Guard CJ McCollum covered an average of 2.75 miles per game.

46. Los Angeles Lakers guard Jerry West’s silhouette is featured in the NBA Logo. He was elected on the basketball hall of fame in 1979.

47. Women’s basketball was officially added as an Olympic medal sport during the 1976 Montreal Summer Olympics. The Soviet team won the first women’s basketball Olympic Gold medal with the United States placing silver. A total of 6 countries participated in the tournament.

49. The San Antonio Spurs the highest franchise regular season winning percentage, winning 61.8% of their games in the regular season for the entire history of the franchise (2,189 wins — 1,352 losses). The Spurs are also tied with the Philadelphia 76ers in terms of having the longest playoff streak, both making the playoffs for 22 consecutive years. The Spurs streak is currently still active and is the longest active playoff streak of an American sports team.