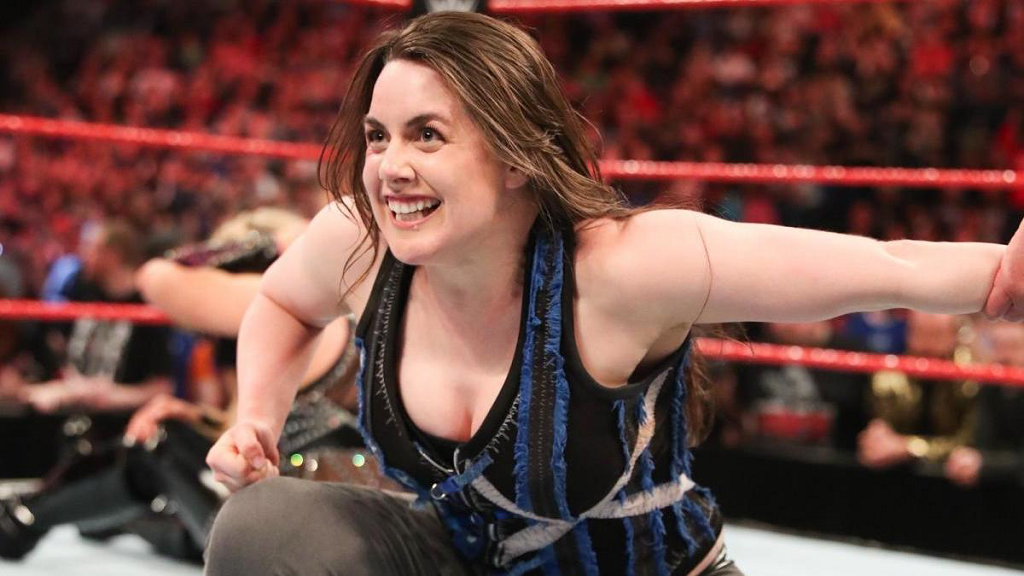 Nikki’s journey to being a professional wrestler can be said to have started by accident. She just stumbled on a wrestling match on the television, and that ignited her passion for becoming a wrestler. Passion is amazing but a wrestling career has had its fair share of challenges – one must be a frequent visitor to the gym and should be brave enough when facing competitors in the ring. Not only that, most of the popular wrestlers have all started from scratch and saw peaks and valleys before making it to our TVs – Nikki Cross is one of them. So, in this article, we look at her journey and all the crazy facts surrounding her rise in the wrestling industry which have led to excellent performances on the ring.

1. Nikki Cross has a master’s degree

You can still get a master’s degree and still go on to become a professional wrestler. When she decided to get herself a bachelor’s degree, she did not stop there.

The TV contract and workouts leave one with little time to pursue other things, but Nikki is good at multitasking.

Nikki got her master’s degree as she went to the University of Glasgow. As if that is not enough to take up all her time, Nikki still is also a certified fitness instructor, nutritionist, and personal trainer..this is the real definition of ambition.

Nikki said her “i-do” to Killian Dain, who is also a WWE champion and her perfect match, The two have been together since 2008 and finally decided to have their wedding in Scotland.

In an interview with Rounda Rousey, the Scottish born wrestler says that the marriage was so intimate, and they had to involve only friends and family members. She reveals that she was happy to celebrate with everyone, but her mother was the most delighted to see her walking down the aisle.

When at home with her husband Killian Dain, they try to do the things that both of them enjoy like reading and watching television. Nikki loves to read books on crime thrillers, and one book that she can recommend for you is one written by Patricia Cornwell. She likes the way the author narrates the stories in that book. Since she is a wrestler, she also enjoys reading wrestling biographies.

Apart from wrestling and academics, Nikki may love to read but her hubby and she prefer to hit the movies. She says they are movie people and make several visits to the cinemas. Sometimes these two stay at home to catch their favorite shows on television.

4. Nikki Cross went back to college to pursue a history course

Apart from wrestling which is her passion and her dream career, she also saw it useful to take some courses in a college in Florida, such as art history, American history, and women’s history.

Nikki applied to do the classes online since that could be convenient for her so that she can balance between wrestling and studies – what a powerhouse, mentally and physically!

5. Nikki Cross knew she would be a wrestler when she was 10

Just like other wrestlers who identify the skill when still young, Nikki says in an interview with Miami Herald that it all started when her sister put on the television a wrestling match. The Scottish lass says that was the first match she set her eyes on and started reasoning in the line of being a professional wrestler.

“I was 10-years-old, and it was [WWE] ‘Fully Loaded’ that my sister put on [the television],” the Scottish wrestler recalled. “The first match was Lita and The Hardy Boyz against Trish Stratus and Test and Albert. That was the first match that I ever laid my eyes on.”

In terms of the skills, she found that she had the potential of being a great wrestler when she was 10. And in terms of passion, the young wrestler saw women doing well in the ring and wished to be like them.

6. She found her first trainer (who is now her husband) through Google

When Nikki realized that she could be a good wrestler and desperately wanted something, she had to explore all options to get it, including Google!

She sought for a trainer through Google while studying at the University of Glasgow in 2008.

Cross did a Google search for “Scottish wrestling school.” The search led her to the Source Wrestling School, where Big Damo –  famously known as Killian Dain – was a trainer.

According to The Mix, Dain says that Nikki is one wrestler who was full of ambition AND determination. In 2016, Dain told the Miami Herald that Cross was one of the “most talented” wrestlers he ever “had the privilege of teaching”

He also disclosed that Nikki could not agree with him when he told her that she could not do something.

“She was fiery, determined, and if we told her she couldn’t do something, then she would go and do it 100 times over. This was at a time when women’s wrestlers were often treated with kid gloves at wrestling schools, but Nikki absolutely refused to be treated differently from her male counterparts and demanded the guys hit her as hard as they hit each other. She was crazily resilient. For example, she broke three bones in her hand and was back to training the next day. I struggle to think if she ever missed a training session.”

7. Her first trainer was her stablemate

Cross signed with WWE in April 2016 and debuted with Sanity that October. Less than two months later, Dain joined her.

This just goes to show that wrestling often has a crazy way of coming full circle, and Cross’s wrestling career has come full circle in a crazier way than most: the person who first trained her was her stablemate in WWE.

8. Nikki is a multi-sport athlete

Adding to her list of never ending achievements and determination, is the fact that although she’s known for wrestling, before joining the profession, she participated in many other games.

While growing up in Scotland, she played netball (a sport derived from early versions of basketball that was developed in England in the 1890s) , basketball, and field hockey. Apart from these sporty sports, Nikki was a dancer, and a cheerleader and was passionate about attending competitions in Glasgow.

This Scottish force of nature might not seem like the team sports type, but along with the cheerleading and dancing skills, she spent more time competing than cheering her teams or  other people on the sidelines – she’s meant for the spotlight.

Impact Wrestling used to go by the name: Total Nonstop Action and Nikki Cross then called Nikki Storm competed in British Bootcamp 2 in 2014.

This unique show was a huge hit for Challenge TV in the UK.

While Nikki Cross was unsuccessful in the show, she successfully made an impression with a scathing promo on Gail Kim. The show was eventually won by Mark Andrews, who defeated Rampage Brown and Kay Lee Ray in the final three.

10. She gained experience in wrestling through working with different people

A young Nikki Cross started wrestling when she was 18 and felt like she had been fighting for ages – she fought all over the world like in Japan, Europe, Canada, and many parts of the United Kingdom.

Battling with varied wrestling styles and different people gave her the distinct experience that gave her a competitive edge. With Nikki’s determination to be the best, this wrestler was always ready to try new stuff and was never afraid of anything.

11. Nikki Cross is the longest-reigning pro wrestler of EVE championship

In her premier match, she paired up with Majik to take on Paige’s parents, Ricky and Saraya Knight. Following her premiere, Nikki Cross started wrestling for numerous promotions across Britain, such as Insane Championship Wrestling and the all-women Pro-Wrestling: EVE.

EVE Championship fans will recall her for her long reign. She won the title three times, making her the longest-reigning champion by holding it for an insane 665 days from February 2013 to November 2014.

12. On social media, Nikki is the best

Seeing Nikki in the ring is not the only way to check out this wrestler.

Nikki Cross uses ALL her social media platforms to interact with her fans ( including videos on YouTube).

This influencer shares her exciting photos on Instagram regularly, especially when she is set for competition.

One look at her YouTube will leave you with trilogy videos of her inside the ring. She also endorses some products of companies with whom she has contracts – a true influencer!

13. Nikki Cross said this surprising thing about pairing up with Alexa Bliss

Nikki was in tag team matches plenty of times, but Alexa Bliss is the first actual partner she’s ever had.

Alexa Bliss and Nikki Cross made a great duo when some fans thought they would be an odd pair at first. Their partnership started with a feud as Nikki Cross swore to ruin Bliss’ WrestleMania hosting gig.

The duo are now former WWE Women’s Tag Team Champions and this title wasn’t just Cross’s first tag team gold, it also marked her first experience as part of a tandem! According to an interview with WWE The Bump, Nikki Cross spoke about her team with Bliss and how she is a great first partner saying: “I’ve never been a tag team wrestler before. Alexa has been awesome. It’s been an amazing year, and I can’t wait to see where we go next.”

As part of the 2020 Draft in October, Nikki Cross was drafted to the Raw (WWE brand).

Prior to signing with WWE, Nikki Cross – like other wrestlers – had appeared in WWE, but it wasn’t to fight.

In a more passive role, Cross appeared as one of Adam Rose’s ‘Rosebuds’ at a Live event when RAW and SmackDown broadcasted live from the ECHO Arena in Liverpool in November 2014. If you check it out, there’s even a listing on IMDB for Cross as a Rosebud.

Even if the footage is just about impossible to find, sharp-eyed fans can quickly spot Cross in the RAW Fallout video. The 5’1 WWE Glasgow-born Superstar appeared as a cavewoman for the tour with other Rosebuds including Braun Strowman, Elias, Alexa Bliss, and Becky Lynch – so she wasn’t in bad company.