Rachel Nichols: Here’s What Fans Never Knew About The Broadcaster 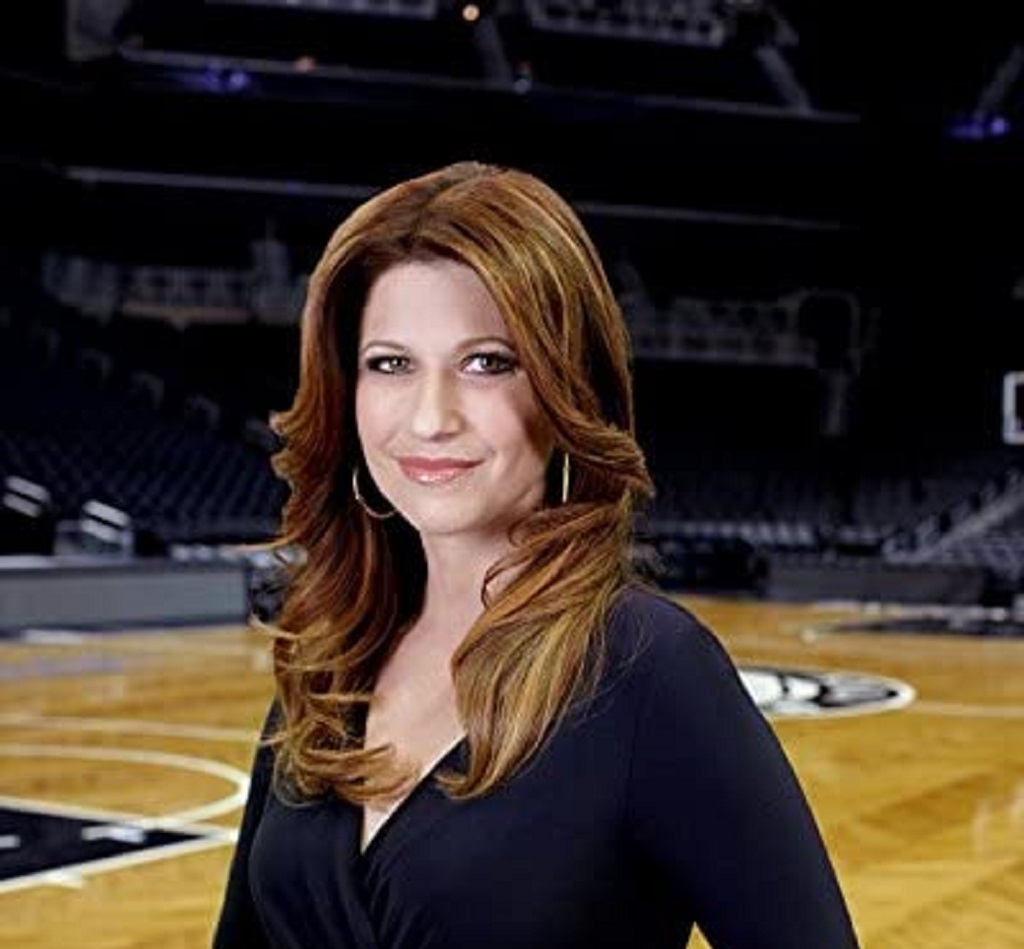 Rachel Nichols has been a staple in sports journalism, interviewing up-and-comers and superstars alike with the same level of grace and frankness. Now a giant in the field, Nichols has kept everyone in the world of athletics in the loop about every dribble, layup, and turnover that goes down on the court. And when she’s not on television, she’s lighting it up on Twitter, where she shares her thoughts on plays, responds to fans and posts photos with super famous athletes.

That being said, the life of Rachel Nichols is filled with stories that might surprise you!

When Nichols was growing up, she knew when she was fairly young that she was lured by sports:

“I knew pretty early. I was on the school paper back in junior high and never really stopped,” she explained in an interview with Midwest Sports Fans. That shows just how suited she was for her industry — it was practically her destiny!

Additionally, she was athletic and played a variety of sports as a young person, mainly soccer.

“From the beginning, sports seemed like the best gig to me,” she continued. “As a kid, the idea that people got paid to follow sports for a living seemed like getting paid to go to recess. Actually, as an adult, I still think that sometimes.” Looks like she truly found the secret to making work fun.

Given that the field of journalism was calling to Nichols at an early age, it makes perfect sense that she decided to go to college for, well, journalism. She went to the Medill School of Journalism, Media, and Integrated Marketing Communications at Northwestern University in Chicago, where she received her bachelor’s degree in 1995.

The school also invited Nichols to speak at its commencement ceremony in 2018, where she addressed graduate students in an afternoon address. “To call my time at Northwestern ‘formative’ would be a colossal understatement — it shaped so much of the journalist, and the person, I’ve turned out to be,” she reflected in an article published by Northwestern University.

Nichols shared an excerpt of the speech on her Instagram page.

She got her start in print journalism:

Upon graduation in 1995, Rachel Nichols headed to work for the Fort Lauderdale Sun-Sentinel, according to her bio on ESPN.

She stayed in Florida for a year, before moving to Washington D.C. to be a reporter for the Washington Post.

Given that it was the late 1990s, print journalism was still a solid industry, so working for a newspaper was a logical choice for Nichols to make.

But television was beckoning her into the field.

“When I was in D.C. and my job was to cover the Washington Capitals, the hockey writer would go on the pre-game show on the local cable network every pre-game to do a segment,” she recalled in an interview with Marie Claire. “So even as a newspaper reporter I was also becoming a TV reporter, kind of on the side.”

“I first did a project with LeBron James when he was in high school. To be able to talk to somebody at the age of 17 and now at the age of 32 — to be able to have these hour-long sit-down check-ins with another human being would be pretty cool even if he was just the guy at the hardware store on the corner,” she shared in an interview with Marie Claire. “

But it’s not the guy from the hardware store, it’s one of the greatest athletes ever.”

As someone with access to the best seats, she says to do this:

Nichols thinks there’s one way to truly experience the excitement of the sports world.

“I’d say if you’re making a list, make it as much about the places as the event,” she continued. “See Wimbledon. See Wrigley. See Madison Square Garden and Augusta and yes, the new Cowboys Stadium, if only to watch that scoreboard.”

She was at that notorious Mike Tyson fight:

It’s arguable that Mike Tyson is one of the most famous and most infamous boxers of all time.

Interestingly, Nichols had a chance to see the man in action at perhaps the most notorious fight of his entire career. “I was at the Tyson-Holyfield fight where Tyson bit off Holyfield’s ear, and the thing is … it was a million-watt night even before the ear thing happened,” she shared in an interview with Midwest Sports Fans. Can you imagine the energy that was in that room?

The NFL is no stranger to scandals, especially in 2014, the league was plagued with an especially high-profile scandal, in particular that of Ray Rice.

The football player allegedly assaulted his then-fiancée and his actions were caught on video, according to TMZ, and the NFL not only claimed the organization hadn’t seen the video, but handed down a paltry two-game suspension as punishment. Understandably, people were outraged.

At that time, Nichols was working as a sports journalist on CNN, and, at a now infamous press conference, she interrogated Roger Goodell, the commissioner of the NFL. “The public did not feel the NFL understood that some of the early answers were not good enough,” she explained in an interview with Sports Illustrated. “Hard questions to Roger Goodell in some ways let people feel like they were having an opportunity to ask the things they wanted to ask.”

Nichol’s reporting appeared to expose the gaffes of the NFL and had a real impact. Don’t mess with Nichols!

A voice against domestic violence:

“I think there’s a lot worse things that go on in other people’s households, also,” he said. “It’s just not caught on video, if that’s safe to say. You know I wish Ray Rice nothing but the best. He’s probably going through a lot right now because football is his love.” He later apologized for the remarks.

This didn’t escape the attention of Nichols, who questioned him on CNN. “You are someone with a history of domestic violence yourself. You’ve even been to jail for it. Why should fans root for you with this kind of history?” she asked.

Mayweather denied any wrongdoing in the interview, saying that the allegations against him are unsubstantiated. “The denial there with Mayweather is truly amazing, right?” she said after the interview segment ended. “It gives an interesting window into the way an abuser can walk around, maintaining over and over again that nothing is wrong despite hard evidence to the contrary.”

She doesn’t hold back:

Questioning Roger Goodell and Floyd Mayweather, Rachel Nichols is not to be taken lightly.

Her monologue on ESPN describes the climate that women who worked there had to deal with, including being touched inappropriately and being told, “You’re going to get gang-banged, aren’t you?” — then hushed and silenced by HR. They also kept someone on staff who pleaded guilty to domestic violence.

How she really feels about other women in her field:

Sports journalism is not a field known for employing a lot of women, something that’s definitely not lost on Nichols.

She definitely made it a point to congratulate other women in the field when they receive accolades. “There’s definitely a ‘we’re all in this together’ feeling about it, at least for me,” she shared in an interview with CNN. “People love the word ‘catfight;’ they love to pit women against each other.” It’s so nice to see women supporting women!

Her most embarrassing television moment:

For as sharp as Nichols is on television, even she has had embarrassing moments. One windy winter day she spent covering an NFL game for Sportscenter in Buffalo stands out for her in particular. “I think gusts were like 65 to 70 miles per hour,” she recalled in an interview with Marie Claire. “It was freezing and I was standing on a riser and my footing was not great, and a gust of wind came while I was giving my report and I just flew off the box.”

“’Fall’ isn’t even the right word. I was swept aside by the wind,” she continued.

“I was literally moved across the screen. We got disconnected and I’m sure the anchor was like, ‘Well, we’ve lost Rachel.'”

Unfortunately the footage doesn’t exist on YouTube, so we’ll never get to see this little mishap.

She met her husband at summer camp:

In May of 2001, she married film director Max Nichols, the son of novelist Annabel Davis-Goff and film director Mike Nichols, who directed movies such as The Graduate and Primary Colors, according to The New York Times.

Additionally, her husband’s stepmother is none other than the famous journalist Diane Sawyer.

They first met at summer camp in Maine together, according to TVNewser.The two did lose touch after their teenage years, but they later reconnected when he reached out to her — and obviously sparks flew.

Advice on being a working mama:

Nichols and her husband have twin girls together, but due to the gender ratio in her field, however, she’s not often able to connect with other working mothers for support. “I’m not around as many working moms as women in other fields, but when I do find other women to connect with, it’s an amazing comfort,” she revealed in an interview with Working Mother magazine.

That doesn’t mean that the people she works with and around aren’t empathetic, though. “I’ve also learned that the working dads I’m around — and I’m around a lot of them — really get it, too, in ways I didn’t expect,” she continued. “More than half the athletes I cover have kids.” So at least she’s not alone.

In fact, the athletes she works with have been a huge help to her in the past. “When I first had my twins, I probably got more advice on work life balance from them than from anyone else,” she added.