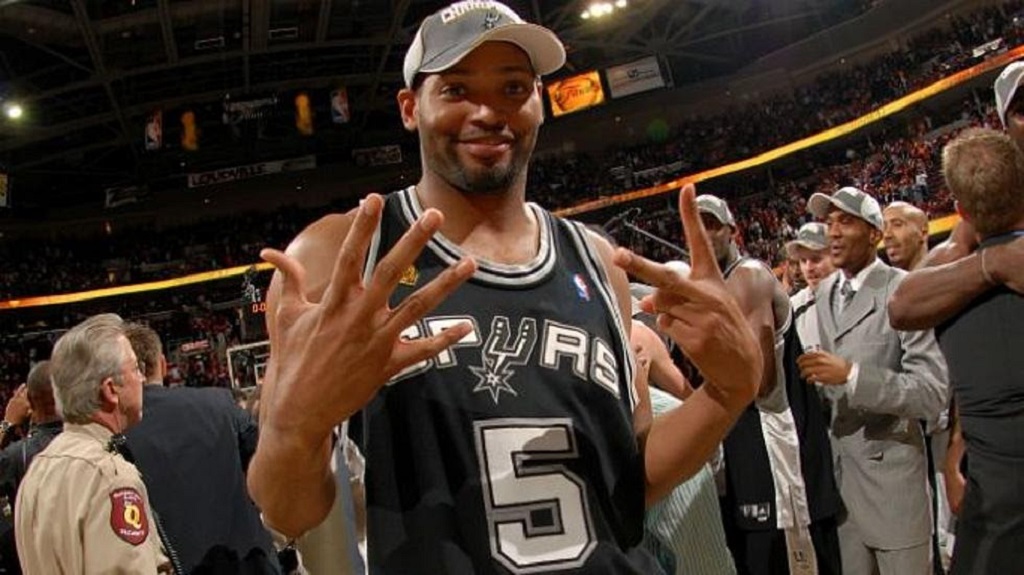 Robert Horry is an American professional basketball player who played for 16 seasons in the NBA. Famous for his consistently brilliant play in clutch moments, “Big Shot Bob” won seven NBA Championships and he is the only player alongside John Salley to have won NBA championships with three different teams. His seven championships are also the most for a player who didn’t play for the Boston Celtics in the 1960s. Let’s find out more about the incredible NBA career of Robert Horry.

Robert Horry: Houston Rockets (back to back titles)

Robert Horry was selected 11th overall in the 1992 NBA draft by the Houston Rockets as a small forward. In his first four seasons with the Rockets, he helped the team win the NBA Championship in 1994 and 1995. While in the Finals, Horry set an individual NBA Finals record with seven steals in a game and also hit five three-pointers in a quarter. Robert Horry played with jersey number 25 during his Rockets stint.

Right from his rookie year, Robert Horry started showing his ability to perform in clutch moments. During Game 7 of the 1993 Western Conference Semifinals against the Seattle SuperSonics, Horry nailed a clutch jumper with the shot clock expiring and 33 seconds left in regulation to put the Rockets up 93–91. The Rockets, however, would lose in overtime.

Robert Horry and Matt Bullard were traded to the Detroit Pistons for Sean Elliott in February 1994. However, Sean Elliott failed a physical test because of his kidney problems. According to Horry, that trade’s failure saved his career. Horry went on to be a key member of the Rockets’ title teams and began to build his “Big Shot” reputation with a game-winning jumper with 6.5 seconds left in Game 1 of the 1995 Western Conference Finals versus the San Antonio Spurs and hitting a 3 to put Houston up 104–100 with 14.1 seconds left in a 106–103 win in Game 3 of the NBA Finals against the Orlando Magic. Following the victory at the 1995 NBA Finals, Horry and the Rockets would win their second NBA Championship. Horry said that out of his 7 championship victories, this was the one he was the proudest of because the Rockets were the sixth seed in the Western Conference.

Robert Horry was a part of a blockbuster trade to the Phoenix Suns along with Sam Cassell, Chucky Brown and Mark Bryant for former NBA Most Valuable Player Charles Barkley in August, 1996. Robert Horry was heavily criticized for not taking enough shots in the game and he felt that it was a big reason why he was traded away. After joining the Suns, Horry had an on-court altercation with coach Danny Ainge, during which Horry threw a towel at Ainge. That incident abruptly ended Horry’s stint with the Suns.

The altercation with Ainge didn’t go down well with the Suns organization and Horry was traded to the Los Angeles Lakers for Cedric Ceballos on January 10, 1997. As #25 had been retired by the Lakers in the honour of Gail Goodrich, Robert Horry switched to #5.

During the 1999–2000 season, Horry came off the bench behind long time veteran A.C. Green. However, during the playoffs, he averaged more minutes than many starters. In the 2000 Finals against the Indiana Pacers, the Lakers took a 2–1 lead into Game 4 in Indiana. The game went into overtime. Shaquille O’Neal fouled out, but Kobe Bryant led a run to seal the Laker victory. Horry finished with 17 points in 37 minutes, his high for the Finals, and won his third championship as the Lakers defeated the Pacers 4 games to 2 to win the first title of their three-peat. Horry averaged 7.6 points and 5.4 rebounds in 27 minutes per game throughout the 2000 playoffs. In the 2000–01 season, Horry played behind Horace Grant but once again played big minutes in the playoffs. He played in 16 of the Lakers 2001 playoffs games, averaging 5.9 points per game. In the Finals against the Philadelphia 76ers, the Lakers dropped Game 1 before winning Game 2. In Game 3 in Philadelphia, Horry scored 12 of his 15 points in the fourth quarter, including a critical three pointer with 47.1 seconds left in the fourth quarter to make it 92–88, followed by making 1 of 2 free throws with 21 seconds left to help seal a 96–91 Laker victory. Robert Horry’s three shots from beyond the arc played a key role in helping the Lakers cruise to a 100-86 victory. The Lakers won Game 5 108–96 to clinch their second straight championship. Horry has stated this victory to be the second-most proudest of his career, following the 1995 NBA Finals.

In the 2001–02 season, Horry was the backup power forward to Samaki Walker, although he started in 23 games. In the playoffs, Horry started 14 of the Lakers’ 19 games playing an average of 37 minutes a game with averages of 9.3 points and 8.1 rebounds a game. Horry’s reputation for clutch play was elevated in Game 4 of the 2002 Western Conference Finals against the Sacramento Kings. Down 1-2 in the series, the Lakers trailed by 24 points in the first half and faced a series closing Game 5 in Sacramento. However, the Lakers went on a furious rally and brought the game to 99-97 with 11.8 seconds left. The final possession ended up being one of Big Shot Bob’s signature moments. After Shaquille O’Neal and Kobe Bryant missed their shots, Robert Horry caught the ball tipped by Sacramento’s Vlade Divac on the three point line and made the shot as the clock expired, giving the Lakers a 100-99 win. Next day, Lakers legend Magic Johnson said Horry was “one of the 10 best clutch players in league history”. The Lakers would eventually win the series in 7 games and swept the New Jersey Nets 4–0 in the NBA Finals to complete a three-peat. Horry started all four games in the Finals.

A situation similar to Game 4 happened on March 5, 2003 in a game against the Indiana Pacers when, while the game was tied at 95, Pacers center Jermaine O’Neal swatted the inside pass for Shaquille O’Neal right into the hands of a wide open Horry, who calmly hit the game-winning shot.

In the 2003 playoffs, the Lakers were attempting to win their fourth straight NBA championship. But in Game 5 in the Western Conference Semifinals against the Spurs, Horry’s chance for another game-winner rattled in and out with 5 seconds left, wiping out the Lakers’ rally from a 25-point deficit. Horry went 0–18 on three-pointers in the series and the Lakers were eliminated in six games.

Following the 2002–03 season, Horry became a free agent. Citing concerns over family, all of whom live in Houston, Horry signed with the San Antonio Spurs. During the 2002–03 season, the Lakers had leaned heavily on Horry, leading to exhaustion and a decline in productivity. With the Spurs, coach Gregg Popovich cut Horry’s minutes significantly, resulting in renewed success. In the 2003–04 season, the Spurs won 57 games and reached the 2004 playoffs where they swept the Memphis Grizzlies in four games, before losing in six games to the Los Angeles Lakers.

During the following season, the Spurs reached the playoffs and went on to win the 2005 NBA Finals. Horry played a significant part in the team’s success, going 38 of 85 behind the three-point line in the 2005 playoffs. In Game 5 of the 2005 NBA Finals against the Detroit Pistons, Horry provided more heroics in the fourth quarter to take San Antonio to a win and 3–2 series lead over Detroit. After only scoring three points in the first three quarters, he scored 21 of the Spurs’ points in the fourth quarter and overtime. The Spurs went on to win Game 5 96–95 after Horry hit a game-winning three-point shot with 5.9 seconds left. His late game heroics at age 34 were so astounding that prominent ESPN columnist Bill Simmons said of the performance, “Horry’s Game 5 ranks alongside MJ’s Game 6 in 1998, Worthy’s Game 7 in 1988, Frazier’s Game 7 in 1970 and every other clutch Finals performance over the years”. The Spurs went on to win Game 7 and capture their third NBA Championship. Robert Horry also captured his sixth NBA Championship in the process.  After winning the series in seven games, the Spurs won their third NBA Championship in seven seasons and Horry received his sixth championship ring.

During the 2007 playoffs, Horry hip-checked Phoenix Suns’ point guard Steve Nash which resulted in a flagrant foul on Horry. During the ensuing commotion, Raja Bell was given a technical foul for charging at Horry. As a result of the skirmish, Robert Horry was ejected from the game. The NBA went on to suspend Horry for Games 5 and 6. The Suns’ Amar’e Stoudemire and Boris Diaw, who left the vicinity of the bench, were issued a suspension for Game 5. The Spurs won the two ensuing games and subsequently moved on to the 2007 NBA Finals, where they swept the Cleveland Cavaliers winning their fourth NBA title and Horry’s seventh individual ring. After winning his seventh championship in 2007, Robert Horry started wearing #25 once again. After finishing the 2007-08 season, Robert Horry became a free agent but no team signed him, effectively ending his NBA career.

Robert Horry said that if there were three words he would want to be remembered by, they would be “He Had Fun”. Here’s a compilation of some of the most clutch moments of Robert “Big Shot Bob” Horry’s incredible NBA career.