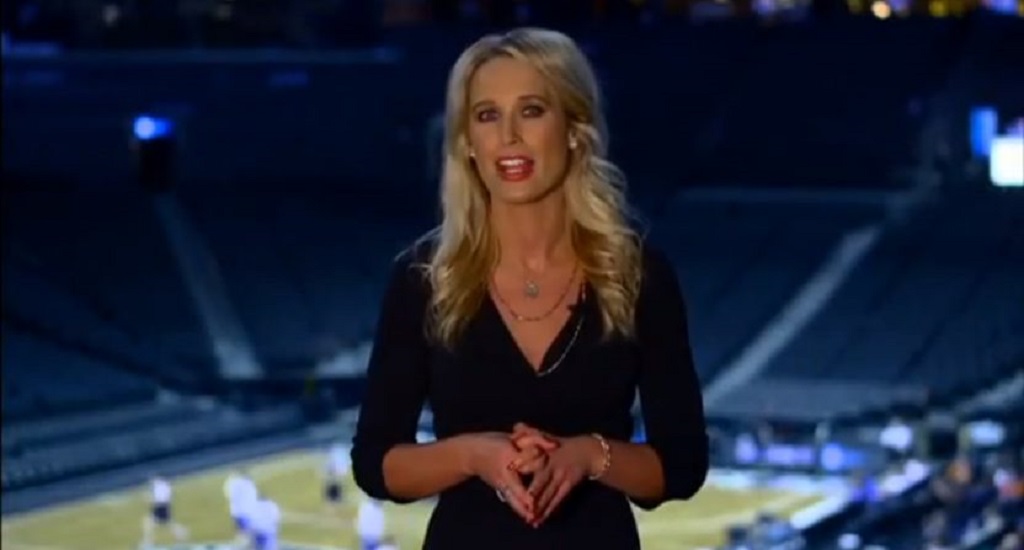 Renowned female sportscaster, Sarah Kustok is currently serving as the primary Brooklyn Nets game analyst, and reporter/anchor for the networks YES Network and Fox Sports. She was promoted as the first full-time analyst for the NBA team’s local TV broadcast in 2017. Sarah Kustok joined the network in 2012 after spending three years with NBC Sports Chicago as a reporter and anchor. The 2017-18 NBA season was Kustok’s first as YES’ primary game analyst after working the previous five seasons as the network’s Nets courtside reporter.

Kustok was born on 17 December 1981 in Orland Park, Illinois to the parents Allan and Anita ‘Jeanie’ Kustok. However, she lost her mother in 2010 when she was killed with a gunshot. Anita was shot while she was sleeping in her sleep at home. According to investigation reports, her father’s innocence till March 2014 then found guilty of murder in 2014 and is currently serving in jail after sentenced for 60-year prison.

Regarding her education, she completed high school from her hometown in Illinois. During high school days, she played volleyball and basketball. She later joined DePaul University and had played on the Blue Demons women’s basketball team. Additionally, she has an older brother, Zak who is a businessman and had played quarterback for the Northwestern Wildcats football team.

In 2020, Kustok won the New York Emmy Award for Sports Analyst, the first time a woman has won that award in New York.

In addition, she was nominated for individual Emmy Awards in 2017 and 2018 while she was YES’ Nets courtside reporter, along with her 2020 Best Analyst nomination.

Sarah’s Father Sentenced For The Murder Of Her Mother

Back on 29 September 2010, an unexpected incident broke the Kustok family after Sarah’s mother Anita “Jeanie” Kustok was killed by a gunshot. What was more devastating for the family was that Sarah’s father, Allan Kustok, was the primary suspect.

Though Allan stuck to a “not guilty” verdict and even the sportscaster spoke in his defense, the argument of the defense lawyer was not enough to convince a jury of Allan’s innocence. The prosecution argued that Allan had killed Jeanie due to his multiple extra-marital affairs.

Allan claimed that on the day of the incident (29 September 2010), he was woken up in his home in Orland Park by the noise of a bullet exploding and found his wife dead in bed.

According to Allan, the .357 Magnum pistol- which was used for the murder- was a gift given by him to Jeanie.

Eventually, he was found guilty of the first-degree murder of his wife of over three decades and sentenced to serve a maximum of life or a minimum of 45 years in prison. If ever released, he will be put under mandatory supervision for three years.

After graduation, she joined ESPN and Fox Sports, where she began her career as an analyst and sideline reporter. During that time, she has covered college football, basketball as well as high school football. She had also served as a TV sideline reporter for broadcasting station Comcast Sportsnet Chicago covering for teams like Cubs, White Sox, and Blackhawks.

Also, she became a sports anchor for Chicago based virtual channel 5 ‘WMAQ-TV’. Then she served as a freelance sports anchor for WFLD-TV. As a color commentator, she worked for WNBA’s Connecticut Su home games. In 2017, she became the NBA’s first-ever female solo analyst when she was promoted as a TV analyst at Brooklyn Nets.

The fans of the successful media personality must be wondering about her relationship or love life. However, the journalist has maintained her personal life or love life away from the eye of the media. Further, it seems that she is a bit of secretive when it comes to sharing details of her secret love or possibly single life. Additionally, it may have reasons or not to prefer to share information on her personal life.

Moreover, she made headlines in 2015 when she spotted getting cozy with the former US-President Bill Clinton. The rumor started when she pictured sitting next to Clinton and having a deep conversation while touching his knee at the Barclays Center in Brooklyn, New York Monday night. However, there is no further information revealed on them.

The professional reporter has made a good amount from her journalism career. Through her great reporting career, she has not only amassed popularity but also able to manage a profitable amount. Therefore, she has a net worth estimated at around $1 million. Further, different sources reported that she earns an annual salary of $59,500 or over.

She is highly active over different social media platforms with verified accounts. But she doesn’t possess any accounts under her name on Facebook.