Confirmed – Messi is the Real Goat of Football 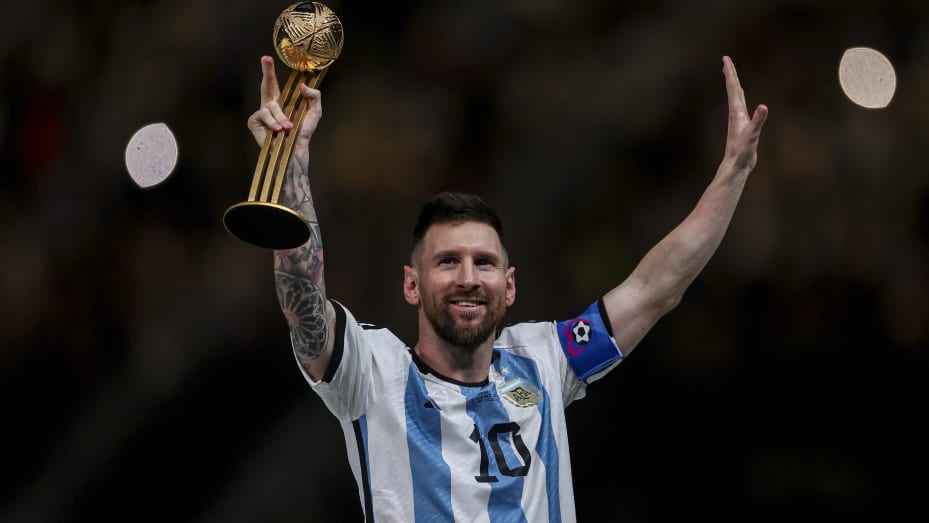 It’s been a month since the FIFA world cup began, and it is successfully happening in Qatar.

Being two teams in Europe vs CONMEBOL with Europe having twelve World cups. An interesting thing to notice this time is that both the teams have already won the world cup twice but this time the battle  is much more fascinating because of  Mbappe and Messi.  Here this time, Mbappe represents a new order in this battle and Messi being the old guard. Though they have won many trophies in their career, their chart with back to back heroic efforts is what makes the game elite.

With all the controversies with the leading players of both the team – Messi and Mbappe didn’t disappoint their fans as both played their best, where Messi made hit goals and Mbappe

with a hattrick made their records.

Statistics being exact, Messi scored a goal in the 109th minute by giving the lead to his team. Whereas Mbappe scored his second and third with a spot kick in the 118th minute to bring the match to a tie.

Going back to the time when Messi started his career with the Argentine club way before getting snapped up by Barcelona during 2000.

While with the club he has won 7 Ballon d’Ors

Later during his first debut in 2005 for Argentina, he made himself observable. He became the youngest to play and score in the FIFA world cup of 2006. From there he got into the finals of the Copa America in 2007 and bagged the title of the young player of the tournament.

An interesting thing to note here is that his style of play is equivalent to that of Diego Maradona.

During the 2018 world cup win by Mbappe, he was the spotlight and was the stardom of France. This speedster and wonder kid was so good that he was compared with one of the sensational and legendary pele because of certain similarities. Not only that, he has also won the world cup at the age of 19. Being an insane pacer, his domestic titles were remarkable. He is well known for his dribbling and he is very quick in the field.

Now coming to the point;

Messi bagged up the FIFA World Cup trophy by defeating France in penalty shoot-out in the lusail stadium of doha, Qatar on 18 December.

During the match both the teams have given their 100% and added apiece in the extra time to clash into a penalty shoot-out.

Both the teams pushed and created history  where Messi scored a brace while Mbappe was stuck in the last 10 minutes of the match thereby winning an extra time.

They both lit up the lusail stadium. It was not about France vs Argentina, in fact it was Number 10 versus Number 10. It was Lionel Messi versus Kylian Mbappe.

Mbappe did wonders in the final, as he scored a hattrick in the finals. He scored his first two goals in just 97 seconds of the match by adding another goal in the next half of the extra time. The game came to life when Mbappe scored two.

More drama spiced up when France claimed a second spot but instead it was a yellow card. The second-half of the extra time created a chance out of nowhere but it didn’t take long for Argentina to score. Mbapp’s Hat-trick in the final with a total of eight goals is a star mark to be noted.

Mbappe became the only player to be the second to score more than six goals since the last match which was held in 1974. He not only moved to 12 world cup goals he once again won the Adidas Golden Boot at the FIFA World Cup, Qatar.

Talking about the controversies about the black robe that Messi wore before accepting the cup it has its own significance. The garment which he wore is known as ‘Bisht’ and is born mainly in Arab which signifies and means prestige or nobility. In Arb it is considered as a symbol of great honor which Messi was lucky enough to have. It is a symbol of royalty, loyalty and wealth for those with high social standards and as Emir of the country gifted this to Messi there by putting it on him with his own hands is nothing but the highest form of honor one can get as a Civilian. Messi would have not realized the time when he wore it , but it is the way they honored him as the GOAT that he was!

As they say, football is a beautiful game and each fan of football witnessed Messi and Mbappe hug each other after the grueling game which is ofcourse a motivation and exceptional inspiration for the aspiring footballers.